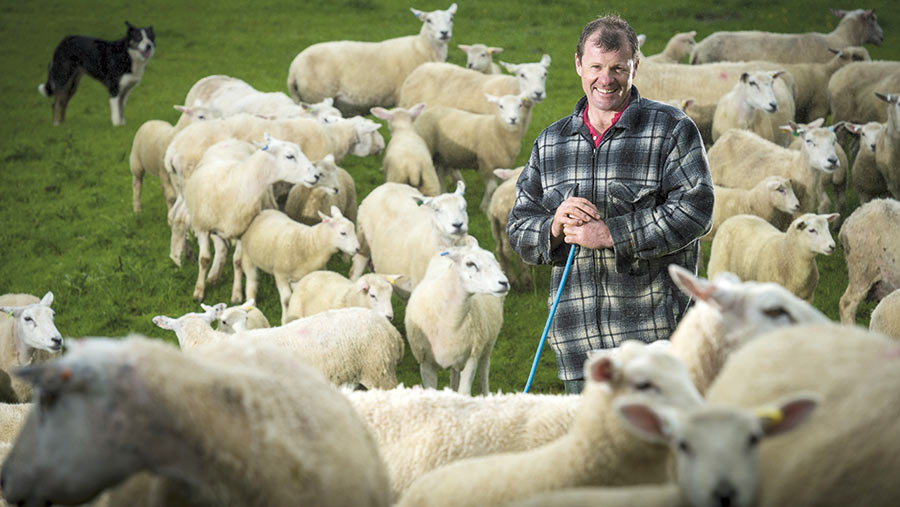 Outsourcing the breeding and lambing of 500 ewe lambs is allowing a large-scale sheep enterprise to maximise stocking rates and grass availability on its own farm.

Ewe lambs from Thistleyhaugh Farm near Morpeth spend 12 months on a holding in Aberdeenshire where they are tupped and lambed outdoors by farmer Clarke Hibberd.

He gets paid £1/kg for total liveweight gain over that 12-month period by owners the Nelless family, and also retains all lambs from the ewe lambs.

Duncan Nelless, who farms with his parents, Henry and Enid, and brother Angus, says there are multiple benefits for both parties.

“Clarke doesn’t need capital tied up in stock or to have long-term tenancies.

“The benefit for us is that we get the ewe lambs off the land which means there is more grass for our ewes, so theoretically they are more productive and we can carry more stock.’’

Finding a compatible farm can be challenging, but Mr Hibberd is the second farmer the Nelless family has worked with. They were introduced by the first farmer they worked with in Morayshire.

That initial agreement came to a natural end because the farmer had retained all the lambs from the ewe lambs and established his own flock.

“That is the one drawback, that after a few years the host farm is fully stocked and wants to breed their own, but there is no reason why every lamb can’t be sold every year,’’ explains Mr Nelless.

This is the second year that Mr Hibberd has worked with the Nelless family.

Mr Nelless took inspiration after seeing this type of agreement working in New Zealand, but has tweaked it to his advantage.

“I saw the system in operation in New Zealand in 2011 and farmers there had ceilings in their contracts because they didn’t want the sheep coming back to their farms overfat, but we don’t think it is necessary to put a limit on the return weight.’’

The animals are again weighed when they return, and Mr Hibberd is paid according to the total kilograms of weight gain (£1/kg).

Mr Nelless believes that basing the agreement on performance increments instead of opting for a weekly payment for every ewe lamb gives the host farmer more incentive to do the job well.

He doesn’t set key performance indicators (KPIs). “We know they will come back heavier and healthy because the better they grow the higher Clarke’s return.”

The ewe lambs are weighed before they leave Thistlehaugh at the start of September – individually because they are performance recorded but Mr Nelless says bulk weighing would work too. Mr Hibberd is then advised of the total weight.

The ewe lambs are vaccinated for all the usual sheep diseases before they leave the farm for Fyvie near Turriff.

Haulage costs are shared – the Nelless’s pay for the transport to Fyvie and Mr Hibberd meets the cost of the return journey to Morpeth.

“Ideally we would use the same wagon for delivery and return, but it never seems to work out that way,’’ says Mr Nelless.

“Because of the exceptionally dry conditions last summer we needed to offload stock in July because we were short of grass, but Clarke had grass and he was happy to have both groups of ewe lambs as it gave him more opportunity to put additional weight on them.’’

Mr Hibberd must cover any costs incurred while the sheep are under his care, such as veterinary fees.

Any mortalities are deducted from the weight total – for instance, if the dead animal is 40kg at the initial weigh-in 40kg is subtracted when the weight gains are totalled.

He uses his own rams for tupping. Lleyns are bought from Thistleyhaugh Farm because of their MV and organic status and their docile temperament.

For the agreement to work the host farmer must have good stockmanship skills.

“It requires a particular skillset to be able to keep 500 ewe lambs behind an electric fence on a big open prairie and it is not an easy job lambing someone else’s ewe lambs,’’ Mr Nelless acknowledges.

A degree of trust is important too, he adds. “Biosecurity is really important to us and we trust Clarke to maintain that and to do a good job.’’

The flock is certified as organic and Maedi Visna (MV) accredited so it is vital that the ewe lambs don’t mix with sheep that don’t comply with these.

Doing a good job is in Mr Hibberd’s interest because the more weight the sheep gain, the more he earns.

“There is a motivation to keep the flock healthy because if we lose stock he loses income,’’ says Mr Nelless.

While there are advantages to Mr Nelless in getting the ewe lambs off the farm for 12 months, for a farmer who doesn’t have capital for land or stock and doesn’t want to tie up money, it gives them a foothold in farming.

Mr Hibberd was employed before he established his farming enterprise, after spotting an opportunity at a local organic vegetable farm.

Grass is grown for three years in front of carrot crops and Mr Hibberd approached the farmer with a view to renting the ground and grazing the grass.

“It is a benefit to him because he doesn’t need machinery for topping it and the sheep provide clean grazing,’’ explains Mr Hibberd.

As the fields have been reseeded the grass is always fresh, which is a bonus for the sheep.

He sells the male lambs fat and retains the top end females – he has already built up a 300-head flock.

Both parties agree that the flexibility of the system is one of its strengths.

Mr Nelless says a big advantage to the farmer lambing the ewe lambs is that no long-term agreements are needed for renting land – all that is needed is for the agreement to cover the production cycle of the group.

“It can be very hard for people to get into farming but for people like Clarke who are good at their job it gives them a start. It works for us and for him.’’

Mr Nelles believes it is a system that could be beneficial to arable farmers.

“Grass in an arable situation is a good idea and it could be an opportunity for restoring damaged arable land.’’