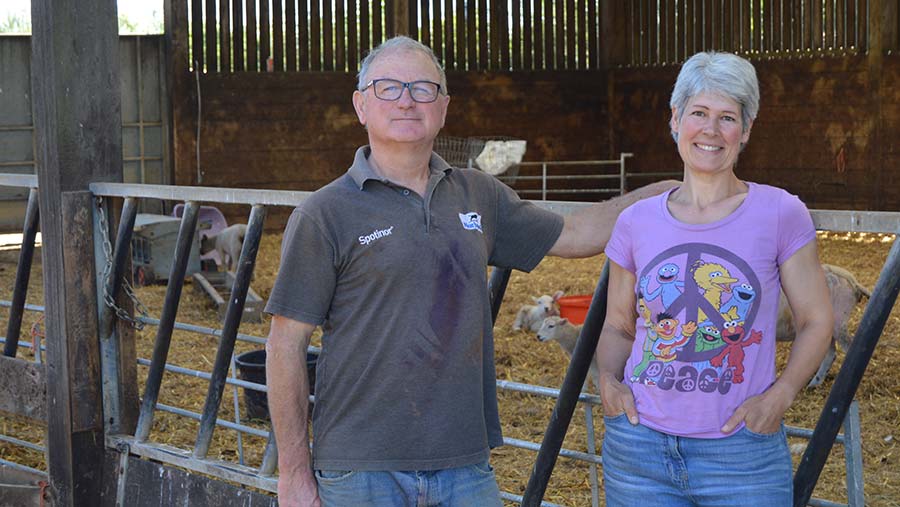 Gloucestershire sheep farmers Martin and Pauhla Whitaker have been placing a big emphasis on flock health, in the belief that if animals are healthy it will help them be more productive and therefore more profitable and resilient for an uncertain future.

This approach is working, with lamb losses at Overtown Farm, Cranham, Gloucestershire, sitting at 7% for the past three years, less than half the estimated UK average of 15%, although many believe the true figure is nearer 25%.

“Five percent is my holy grail,” says Mrs Whitaker, who runs 370 ewes, the majority of which are mules bred to Texel, Vendeen and Lleyn-cross Texel sires.

See also: More case studies, advice and tips about sheep farming in the Know How centre

Their sheep vet, Phillipa Page of Flock Health, has instilled an attitude of spending on prevention rather than reacting to illness – “good spend” rather than “bad spend” – something the Whitakers are very much on board with as they are both keen to minimise any contribution to the risk of anthelmintic and antibiotic resistance.

Flock health planning is all about having a good relationship and regular engagement with a sheep vet who has access to current, evidence-based information, says Mrs Page, who runs her own flock with her husband in Gloucestershire alongside her veterinary consultancy work.

“It’s shifted from a standard paper exercise to a proactive method of engagement,” she says. “There’s always a vet and med spend with livestock – it’s just how it’s spent.”

This year it has paid dividends at Overtown Farm where the flock is lambed indoors, the bulk of it in April. Recently weighed lambs were achieving growth weights of 300-400g/day and the first draw sold was in early July.

Lamb mortality is forecast to be higher than in the past few years – it is at 11% losses since scanning, but this is not surprising given the challenging year.

Mrs Whitaker says the issue now is working out how much of that was avoidable, if any, and forming a plan to minimise avoidable losses next year. She adds that a lot of their planning is about sorting out niggling problems and fine-tuning protocols to achieve marginal gains.

Three of the main areas the farm and vet team have made improvements are:

Hygiene protocols which have helped get lamb losses at lambing down to 3%-4% are:

The protocol at Overtown is to:

A close shave with scab

Having a quarantine protocol in place helped stave off a serious scab issue with a bought-in tup a few years ago.

The tup was bought from a reputable source, brought back to the farm, quarantined and then put in with the other rams.

Four days before the rams were due to go in with the ewes, a couple of the tups starting scratching, and scrapings taken that day revealed scab.

As a result, following treatment, tupping was moved back by 18 days. Had the rams gone in with the ewes, they suspect they would have still been tackling the scab at lambing time.

Because of the flock’s organic status, the Whitakers have to get an annual derogation to use a clear wormer that is effective against scab for use on bought-in rams.

The Whttakers’ use of EID technology and rigorous recording allows them to monitor body condition scores at weaning, drafting, scanning and lambing.

Previously only underperforming ewes were body-condition scored at lambing, but this year they were all recorded, as were lamb birth weights for the first time.

This information, in addition to the continual weighing of lambs, should give a wealth of data by the end of the year.

This will help inform decisions on replacement ewes and terminal sires for the next generation of the Overtown flock, which might get them that bit closer to Mrs Whitaker’s holy grail of 5%.

When you have clinical disease, timely and appropriate treatment is required, and arguably each treatment can be seen as an investment as it prevents further cases.

However, the real challenge is to prevent the cases occurring in the first place.

This can be seen with lameness and abortion in ewes.