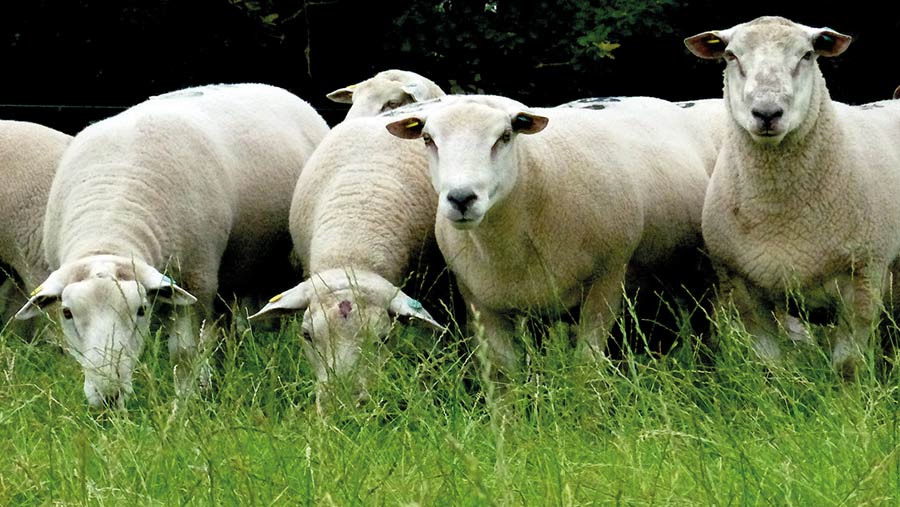 Selecting leading proven terminal sires has resulted in lambs that finished 30 days faster on average for a Yorkshire sheep breeder.

George Fell, who runs a flock of 500 Meatlinc and 300 Lleyn cross Meatlinc ewes at West Grange Farm, Thorganby, York, began outcrossing Meatlinc in 2012 with the help of the Scotland’s Rural College (SRUC).

The project aimed to maintain the breed’s rapid genetic growth by cherry picking top genetics from other breeds.

A secondary benefit was that this would diversify the breed’s gene pool.

Inbreeding is a consideration in any elite flock, but particularly in a breed of just 1,200 breeding ewes, explains Mr Fell.

Now in its ninth year, the project has produced a ram that sired the fastest-growing lambs in last year’s terminal sire progeny evaluation scheme RamCompare.

This was 620g heavier and 30 days faster than the average lamb performance on the trial farm (see “How Thorganby 09012 performed commercially”).

Mr Fell applied for government funding in May 2011 and pitched the idea to the Technology Strategy Board.

He contributed 50% to the £292,150 project and work got under way in April 2012 and enlisted SRUC geneticists to develop an outcross breeding programme.

Top 10% Thorganby Meatlinc ewes were artificially inseminated (AI) with a Charollais, a Suffolk and a Texel chosen on the “5 and 90 rule” to produce a cross-bred Meatlinc 590 (ML590).

Semen cost about £15-£30 a dose and initial outcrosses were done by AI.

“Outcrossing rams had to be in the top 5% and have 90% accuracy for those traits,” says Mr Fell.

“Then we knew we were using good proven tups.”

The entire project used five Charollais and five Texel rams and a Suffolk that was proven for high growth rate in year two, a trait they wanted to harness.

Each generation’s progeny was CT scanned to reveal which grew to the best conformation and all-round lean meat yield on the Fell’s system. Almost 400 CT scans were taken.

The Fells have produced forage-reared Meatlinc rams since 1963, when the breed was founded by George’s grandfather, Henry.

Sheep lamb indoors due to land being quiet heavy and pasture being spread out.

However, they have always aimed to breed fine-boned animals with small heads and shoulders to allow for unassisted lambing.

Ewes are grass fed until Christmas, with the aim of leaving 1,500-1,700kg/ha dry matter covers to ensure fast spring regrowth.

Ewes then strip graze stubble turnips before being housed four weeks pre-lambing and being fed concentrate and silage, depending on scan results.

Commercial ewes are also lambed indoors, but the farm hopes to lamb them outdoors under the guidance of grazing consultant James Daniel, Precision Grazing.

No hard feed is given to ewes or lambs outside. After three-to-four weeks, ewes and lambs are mobbed up and rotationally grazed alongside the dairy-beef cattle.

Ram lambs are grazed on grass until winter, graze turnips for 10 weeks and then graze permanent pasture leading up to sale.

The commercials sell 25% of lambs off their mothers, 25% sold in later summer and 50% sold off turnips in the new year in a typical year.

Mr Fell will continue outcrossing and backcrossing Meatlincs using a spreadsheet, instead of consultants.

Rams will be Sigent recorded and the cross-bred analysis (developed through RamCompare) will help to evaluate animals.

He says the Meatlinc now faces more competition than ever, with more forage-reared, commercially produced rams on the market.

“We used to sell 120 shearlings a year and now we sell nearer 80. I try to keep my costs realistic, selling commercial high-index rams for £650.”

Thorganby 09012 outperformed the other sires on Mark Exelby’s commercial organic farm, Hutts Farm, Ripon, which is testing rams in the Ram Compare scheme.

The ram sired 71 lambs in 2019 and a further 78 this year to the farm’s North of England Mules and Texel crosses, which are bred for two cycles in December to lamb outdoors in May.

Progeny were finished off grass and clover leys with oats fed in a three-in-one feeder at Hutts Farm before the rest were moved down to the farm’s finishing unit near Leeming Bar on the Vale of York.

“We noticed the lambs were very thrifty at birth and weighed well at eight and 12 weeks,” says Mr Exelby.

“There were plenty of Meatlinc sired lambs in the earlier draws, so I wasn’t surprised to see him do well.”