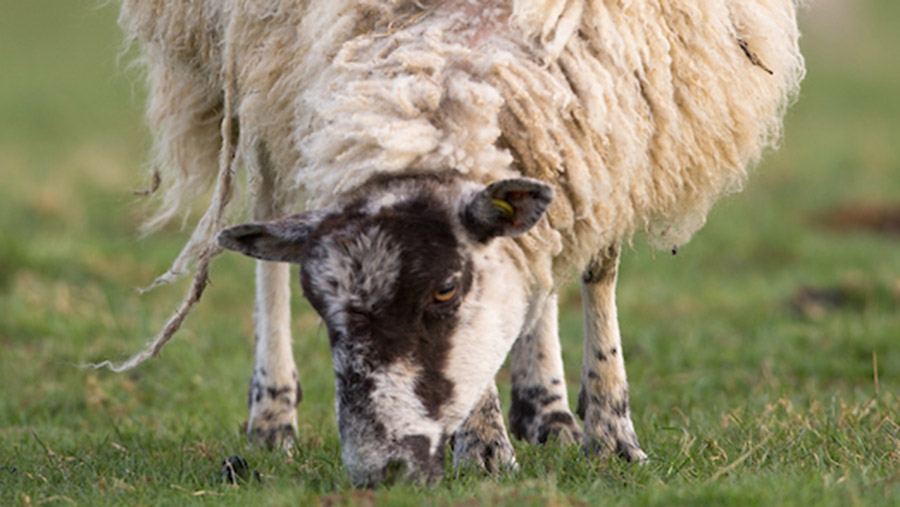 Sheep farmers may want to consider treating their ewes prior to lambing with a long-acting wormer, after a study has found it reduces the parasite burden in lambs and improves growth rates.

A trial by FAI Farms in Oxfordshire last year (2017), compared the differences of treating ewes with either long-acting wormer, short-acting wormer or nothing at all using a control group.

See also: Q&A: How to control spring rise in sheep

What causes a spring rise in worms?

Ewes are more likely to shed worm eggs from around two weeks before lambing until six weeks post lambing, due to a decrease in their immunity.

This is because the protein resource is being taken by the growing foetus(es) and milk production, leading to lowered protection from the ewe’s immune system.

This drop in immunity triggers an awakening in the worm larvae that have hibernated over winter in the ewe and leads to egg shedding and pasture contamination, which is a risk to grazing lambs. This spike in worm eggs is what is known as the spring rise.

How to reduce pasture contamination

Worming ewes prior to lambing with a long-acting product can help minimise the spring rise.

Results show the lower egg output and ewes potentially “hoovering” the pasture meant that throughout the season the pasture contamination continued to reduce in the long-acting wormer treatment group, further reducing the risk to lambs.

The other two groups showed a rebound due to ewe egg output.

“Newly lambed ewes represent the major source of gastro-intestinal parasites for growing lambs and are therefore a priority for parasite control.”

“The findings from this study suggest injecting ewes with long-acting moxidectin prior to lambing could be useful as part of a flock parasite control programme.”

This treatment can also help minimise the use of other anthelmintic treatments in that breeding year, and reduce pasture contamination for those sheep which will graze the pasture in the next year, she adds.

However, combating parasites and the associated anthelmintic resistance that has developed in recent years will require a multi-faceted approach, adds Dr Bright.

“We understand from other studies that long-acting macrocyclic lactones can be transferred from ewes to lambs via the milk, and therefore are aware of the risks of anthelmintic resistance if used annually.

“Therefore, we advise it is used as part of a holistic parasite control programme, including genetic selection based on parasite resistance and resilience, grazing management, nutritional management, targeted selective treatment, effective quarantine procedures and grazing plants with anti-parasitic properties,” she adds.

“With the annual cost of stomach worms to the British Sheep industry estimated to be about £84m, sheep farmers need to be looking at ways to reduce losses on farm due to worms, but in a responsible way.

However, Dr Armstrong warns that controlling the spring rise will not prevent the potential issue of a nematodirus outbreak. “This is because this worm does not overwinter in the adult sheep and in fact, overwinters on pasture and hatches when temperatures are between 10-14C.

“If you use a long-acting wormer at lambing, you will still have to monitor the nematodirus risk on your farm and take necessary action, if the risk is there.”

He added that farmers should also consider using an “exit drench” which effectively means using one of the novel group 4 or group 5 wormers in order to minimise the impact of future anthelmintic resistance.

Note: *250 eggs per gramme is used as a suggested treatment threshold; this will vary on farm circumstances and worm species