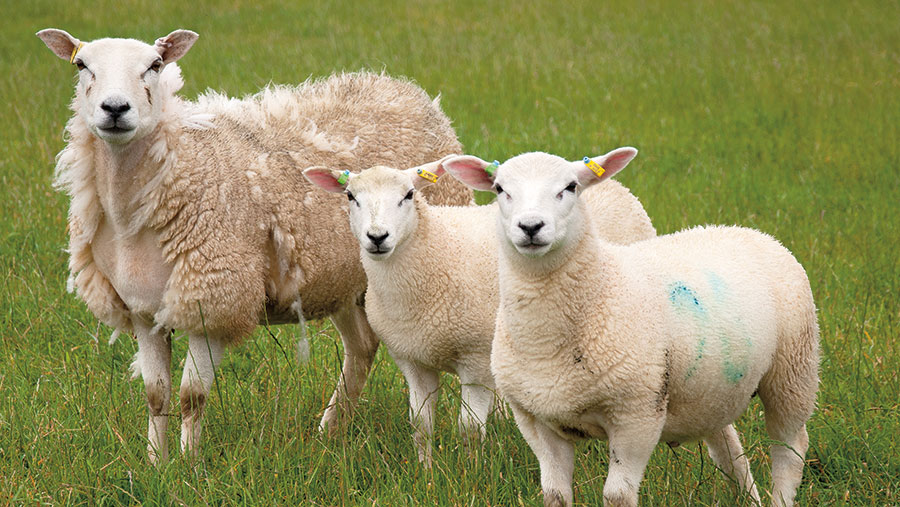 In a short period of time entrepreneur Reuben Saunders has quickly built a 600-ewe Lleyn flock in Gloucester by amassing grass keep.

A first-generation farmer, Mr Saunders says he got the agriculture bug after spending school holidays on a relative’s farm in his native Cornwall.

His route into farming began in 2000 with a national diploma in agriculture at the Duchy College in his home county.

That was followed by a top-up course to higher national diploma level at Harper Adams University College, Shropshire.

From there he joined Velcourt as an assistant manager before moving to Gloucestershire to work on a beef, sheep and arable farm as a head tractor driver.

It was then that he decided to become self-employed, working mainly for a contractor/tenant farmer.

About five years ago the farm’s landlord put most of the land (about 324ha) out for tender on a Farm Business Tenancy.

“We put in a realistic tender that reflected the quality of the land. But we were unsuccessful,” Mr Saunders says. 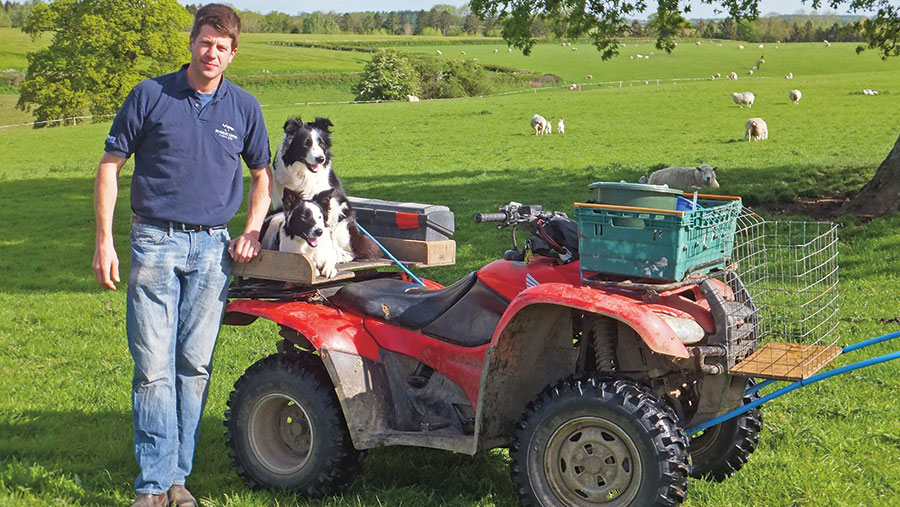 He continued to work with the business before an opportunity arose to buy 200 commercial Lleyn sheep (mainly ewe lambs) in August 2011.

Through contacts and friends at the local young farmers’ club, where he was chairman, Mr Saunders started to pick up grass keep.

Over the past five years he has amassed 10 land parcels around his home. About 28ha is close to his house and another 40ha is about a 10 minutes drive away.

He has a further 48ha with a substantial set of buildings, which he uses to run a “to-order” calf-rearing business (see “Diversification”, below).

Of the total, 90ha is farmed under grazing licence agreements. The rest is on a pence a head a week gentleman’s agreement.

He says the lack of subsidies has made him more focused on cost management and flock performance and he has managed to expand from the original 200 to 600 ewes.

About 140 are still run commercially. The rest are now pedigree under his prefix, Boakley Lleyns.

The commercial ewes are put to an Innovis Aberfield ram.

“Margins are tight so I lamb outdoors to keep housing and labour costs to a minimum,” he says.

Lambing takes place over a seven-week period beginning on 1 April.

“I lamb the ewes on my own but carefully record and cost all of my labour,” Mr Saunders adds.

All lambs are tagged and recorded at birth.

“Keeping labour costs down means I cannot afford to retain any ewes which give me problems. Uncompromising decisions have to be made. I cull ewes if they have prolapsed or had any other difficulty at all during lambing. Their lambs are also given a kill tag.”

The aim is for the ewes to be able to lamb outdoors without getting into difficulty. The ewes are scanned and only those carrying single lambs are housed.

That may seem an odd decision, says Mr Saunders, but the singles are fed on hay alone so unborn lambs do not get too big and cause problems at birth.

The ewes with triplets are run on the best grazing, which is adjacent to the sheds.

“It means the triplets get the highest quality grazing while the single-lamb ewes are close by, making fostering easier to manage on my own,” he says.

Lamb growth rates are then recorded again at eight weeks old, which Mr Saunders says is the most important recording point.

“Crucially it gives the best indication of the ewe’s maternal ability, showing how well she can rear her lambs on her milk. The average eight-week weight this year was 22kg – slightly down due to poor grass growth during March/April,” he says.

To improve the flock, the bottom 10% performing ewes are culled out and only the top 1% of rams are used to breed from.

This focus on improving genetics alongside careful grassland management have raised eight-week weights by 1.5kg since 2014.

Regular blood tests are carried out to provide information on trace element levels.

Some of the land has a cobalt and selenium deficiency. This is corrected using boluses.

At 21 weeks, lambs are weighed again and have eye-muscle and back-fat measured for their carcass index.

All of the fat lambs are sold off by Christmas to Dunbia or Cotswold Livestock Marketing.

The flock averages 19kg deadweight with 97%+ achieving Grade R or above.

Barren ewe rates are running at 1.2% with 94% conceiving during the first cycle.

Anything that lambs during the second cycle is not kept for breeding. At 175% reared, the flock performance is in the top third for UK lowland sheep production.

The rigorous approach to recording costs means Mr Saunders has a solid handle on profit margins for the commercial flock.

With every single input costed and broken down – including labour, rents, accountancy, transport and everything he can put down – lamb production costs are £52 a lamb.

The average sale price for commercial lambs last year was £64 a lamb.

For the pedigree flock about 150 ram lambs are left entire.

These go through a selection process after the 21-week weighing.

They are judged on performance and structure and numbers are cut to 50 before a further final whittling down.

“I took 17 to be inspected by the breed society this year,” Mr Saunders says.

“I then sell to pedigree flocks and commercial breeders off the farm and at society sales.”

Flock performance off grazing without fertiliser

Although the grazing is fragmented, Mr Saunders says this has worked to his advantage.

“I have set up a rotation on a field-by-field basis with nine ewes a hectare and lambs at foot.”

He has ruled out cell grazing even though he knows he could push the grass harder.

“I looked at cell grazing, but when I costed in the extra labour and electric fencing needed it wasn’t worth the extra time,” he says.

Last year weaning weights averaged 57.5kg a ewe at 100 days, but Mr Saunders is determined to beat this.

All of the performance is achieved entirely off grass. Even when grazing is poor, as it was this season, there is still no buffer feeding – only the triplets receive feed blocks.

Mr Saunders carries out regular faecal egg counts to assess when to treat stock for worms.

“The rotation system and distinct parcels mean I haven’t needed to worm the ewes for four years,” Mr Saunders says.

But he stresses that one area where he could not afford to cut costs was on animal health.

The flock is Maedi Visna accredited and ewes are vaccinated against toxoplasmosis prior to tupping. The flock is also treated for clostridial and pasteurella diseases.

Another area where he has invested money is on the handling system.

“A good handling system is essential. I have to be able to operate it on my own and it needs to be totally mobile,” he says.

Mr Saunders invested £10,000 in handling hardware, computer recording equipment and weigh scales.  But he offset some of the cost with a 40% Farming and Forestry Improvement Scheme grant and by selling his old handling set up, which he had welded himself.

“It is a long-term investment that will help me continue to keep costs down and make recording easier as time is a premium to me,” says Mr Saunders who adds that he has an eye on continual improvement and progression.

“I am going to keep striving to improve the genetics – increase growth rates and ease of management as well as produce stock that is pleasing on the eye.”

Reuben Saunders has backed up his sheep enterprise with two further income streams:

Batch-reared calves bought to the spec of client farmers. The calves are sourced from local farms and markets and reared in groups of 80 according to the needs of buyers. They are taken to 120kg.

Farmplan offers a range of livestock equipment enabling you to read cattle tags out on farm as well as check and update animal details. Find out more.