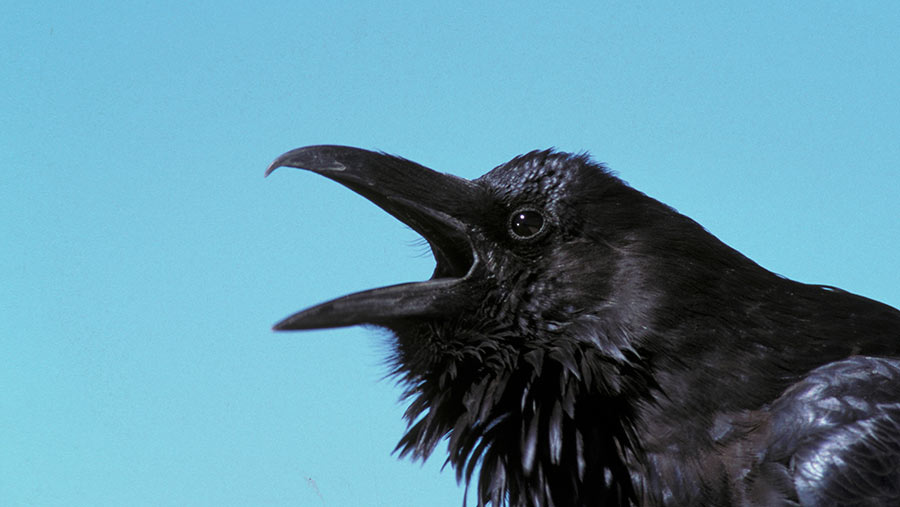 Farmers looking to apply for a licence to cull ravens on their land must first take steps to deter the birds by using non-lethal methods – such as gas cannons and scarecrows – and then prove that the problems persist.

Even though the bird is a protected species, numbers have recovered to such an extent in some areas that they are posing a real menace to livestock. Newborn lambs are especially vulnerable, sometimes having their eyes and tongues pecked out by the birds.

Following media attention surrounding the story, the National Sheep Association (NSA) said it had received numerous enquiries and produced a factsheet for members on how to apply for a licence.

“The position is that, in all UK nations, farmers must first encourage ravens away from livestock using non-lethal tactics,” said NSA chief executive Phil Stocker.

“Where this is not deemed sufficient to protect animals, a licence can be applied for to kill a limited number of birds to aid scaring and encourage other ravens away from the area.”

For farmers in England, it explains that Natural England also requires anyone wanting a licence to first keep a log to prove that non-lethal techniques have failed.

“If granted, a licence will only permit a very limited amount of birds to be killed and only as an aid to scaring. The licence will not permit an open cull of the birds,” says the NSA advice.

The factsheet also provides links to both a suitable monitoring form (PDF) and the application form (PDF).

Similarly in Scotland, Scottish Natural Heritage (SNH) requires “compelling evidence” that serious damage to livestock is occurring. Application forms are available on the SNH website and the applicant must specify the number of birds that are believed to be causing the issue.

Raven culling is seemingly more widespread in Scotland, where figures recently quoted by the Scottish government confirmed more than 400 licences had been issued in the past three years, permitting the culling of 3,334 birds.

Mr Stocker said he was pleased to see both Natural England and Scottish Natural Heritage moving to help tackle the problem.

“NSA members who suffer high losses from ravens, particularly at lambing time, share troubling stories of the damage these birds can cause.

“It is important for farmers, who have respected the protection order on these birds, to be able to apply for licences where the situation cannot be controlled in any other way.”

But the NSA also warned that illegal culling could result in up to six months’ imprisonment and a £5,000 fine per offence.

The RSPB estimates there are now about 7,400 pairs or ravens in the UK and accepts that, in certain circumstances, it may be necessary for farmers to kill a limited number for livestock protection.

“Ravens are great opportunists with a hugely catholic diet and will indeed, on occasion, kill lambs,” says conservation director Martin Harper on the society’s website. “The RSPB acknowledges this can be a distressing situation.”

However, it questions the lack of transparency in the licence application process.

“How would we, either the RSPB or a member of the public, know what non-lethal measures had been carried out by a farmer and why they failed?” it asks.

“How would we know how many licences for how many birds have been issued? How many ravens will NE allow to be culled in England, now and into the future? None of this information is in the public domain.”