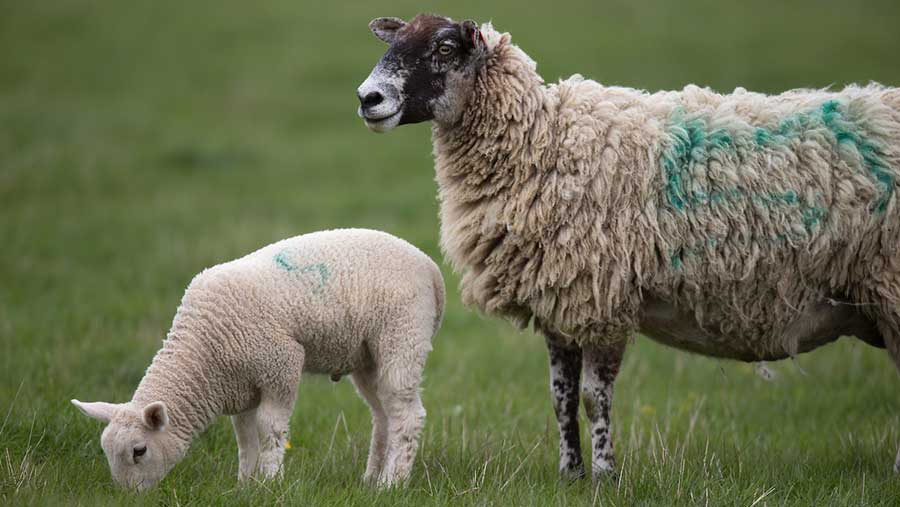 Sheep farmers are being urged not to assume Nematodirus is the only worm causing problems in lambs this spring, after faecal egg count results found other stomach worms to be challenging stock.

In North Wales, sheep farmer Owen Burns at Dan Y Deri, Corwen, who is one of 18 farmers involved in a Parasite Watch scheme run by Zoetis, found he had more than 2,000 eggs per gram (epg) in samples taken in six-week-old lambs, none of which were Nematodirus.

See also: What sheep worms are rife in your region?

Vet Dr Dave Armstrong from Zoetis says farmers shouldn’t assume because of the time of the year that Nematodirus is the only worm challenge.

Dr Armstrong strongly advises farmers to take faecal egg counts and use the information to advise on the right treatment.

When analysing results, 250 epg is a suggested cut-off for most worms. Above this is high enough to be causing production losses.

At Mr Burns’ farm, faecal egg counts taken on 9 April from lambs born at the beginning of March were found to have egg counts of 2,170 epg.

Samples were taken from lambs housed in a field near the farmhouse that is used every year to turn ewes and lambs out on to.

“Mr Burns would normally drench lambs before being turned out onto the mountain when they are a couple of months old, but they are now going to treat lambs with a drench containing moxidectin.”

Mr Jones believes the warm weather seen at the start of April, when temperatures averaged 12-15C, sparked some worm activity on the land earlier than would be expected.

“It’s not Nematodirus though, it’s other stomach worms we have been seeing,” he says. “Although Mr Burns didn’t see any obvious check in lamb growth or much scouring, if he wasn’t doing faecal egg counts then, undoubtedly, he would have had some loss in liveweight gain.”

Mr Jones says the same worm pattern has been seen at the Chatsworth Estate in Bakewell, Derbyshire, where egg counts taken on 6 April in six-week-old lambs found levels at 285 epg.

“Farm manager David Howlett had seen one or two lambs scouring, but not badly, and felt [they] could be doing better,” he says. “They have now treated lambs with levamisole and he has seen an improvement. We will be going back and doing a post-treatment test.”

Sheep farmer Steve Thompson, Trewern Farm, Llanilltern, Cardiff, had an egg count reading of 455 epg from a test taken on 3 April in ewes that were housed. He says he wanted to be involved in the Zoetis Parasite Watch scheme so he could deal with problems on a one-to-one basis.

“Traditionally we would just blanket treat stock without realising the level of the problem. By taking the faecal egg tests we can treat only what we need to treat and treat for the right thing. It will allow us to be more effective,” he says.

Mr Thompson has only been farming sheep for six years and has 250 Welsh Mule ewes and more than 100 ewe lambs.

The high egg counts were found in ewes that had been housed since January. “Everything is still housed at the moment, so the egg count is not a true reflection of what is happening on the pasture. As soon as we turn stock out, we will do another test,” he says.

Mr Jones urges farmers to work with their vet and take faecal eggs counts. “Find out what is happening on your farm and then you can select the appropriate treatment,” he says.

The aim of Parasite Watch is to show what is happening across the UK using an interactive map found at www.parasitewatch.co.uk. Parasite data from each of the farms will be updated regularly, which will allow farmers to see if there are spikes in certain parasites throughout the year in their area and enable them to take appropriate action.

To use the map, click on a farm in your area and details of any parasites that have been found as well as when they were detected will be displayed. Test results will be online within hours of the test being taken.