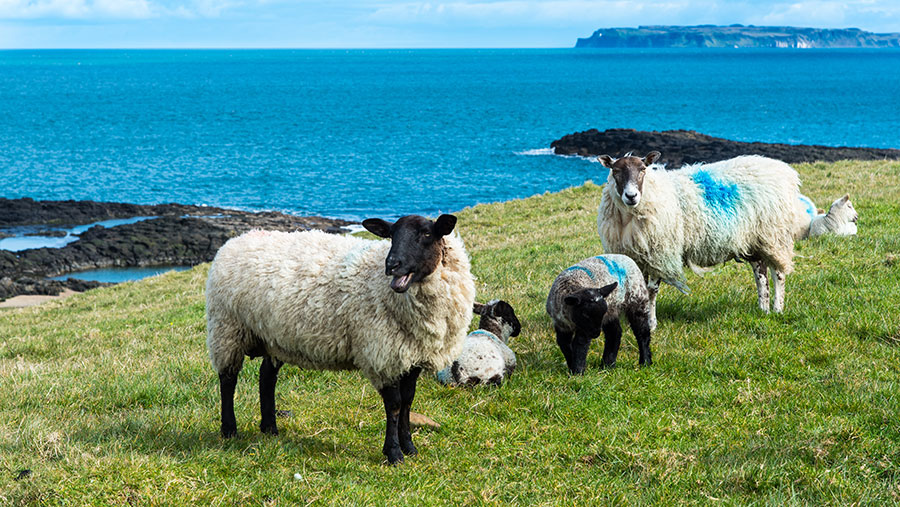 Northern Ireland’s sheep breeders have been reassured animal movements to Great Britain will not be affected by a small outbreak of maedi visna (MV) in the country.

This message follows days of near-hysteria ignited by leaked intelligence from a breed society on a flock health scheme’s advisory board.

Breeders feared millions of pounds of sales were threatened following the discovery of MV in a small number of Northern Irish sheep last month.

The board was privy to intimations that Northern Ireland had lost its treasured MV-free status and breeders would have to join the Premium Sheep and Goat Health Scheme.

The highly infectious iceberg disease was identified in three rams from a Northern Irish flock which tested positive for MV in Scotland. Two other positive rams were also traced back to Northern Ireland.

The Department of Agriculture, Environment and Rural Affairs (DAERA) said movement restrictions and veterinary investigations had been placed on the affected holdings.

Mr Huey said:  “A number of options to maintain Northern Ireland’s disease status are being considered, including the introduction of a Northern Ireland or all-island accreditation scheme similar to that in operation in Great Britain.

“Department officials continue to work closely with stakeholders and their counterparts in Great Britain and the Republic of Ireland. I would continue to stress that anyone moving animals into Northern Ireland should ensure that they source stock responsibly.”

Losing MV-free status would prevent breeders from making sales for at least six months. This is the minimum time needed to pass between the two tests required for MV-free status to be granted.

“That would have precluded breeders from many flagship sales, including Exeter’s Dorset May Fair and the Charollais Premier sale at Worcester,” said Mr Adamson.

“Hearing this was a total bolt from the blue. We want healthy sheep both in Northern Ireland and everywhere else.

“We need a practical solution for Northern Irish breeders, but also must protect members of the scheme. We will now try to pour water on this fire and find a mutual way forward.”

Industry leaders say the lobbying and concern that followed the leaked revelations may have resulted in clarity and a degree of backtracking from the Premium Sheep and Goat Health Scheme run by SRUC Veterinary Services for Defra.

SRUC’s media office said: “We understand that a statement from the chief veterinary officer for Northern Ireland on the subject is imminent and at present we do not anticipate the need for any change in the way sheep from Northern Ireland are considered in relation to the risk of introducing MV infection. We will be keeping the matter under review.”

But he stressed breeders should be aware of the far-ranging consequences for the entire sheep sector should MV-free status be lost, or sheep be considered non-accredited for MV once they arrive in Great Britain.

“There are implications for both shows and sales in Northern Ireland, with the potential for events to have to segregate stock in a manner not previously done in the province, but on broadly the same basis as GB show organisers have operated for several decades. How practical this will be for some events is yet unclear,” said Mr Yates.

He added that this latest news was another seismic blow to NI pedigree sheep breeders who had already suffered immense NI-GB trading difficulties over the past 12 months due to the Brexit withdrawal agreement.

“If current rules are applied for the inclusion of NI flocks into the scheme that operates currently for GB only, every animal over 12 months old will need to be blood-tested twice at least six months apart – with sample testing alone costing £3.20 a head,” he added.

“Ultimately, whether NI flocks need or choose to become MV-accredited will be a cost: benefit decision for individual flock owners to make based on their own situation, their trading patterns and any further information made available by DAERA.”