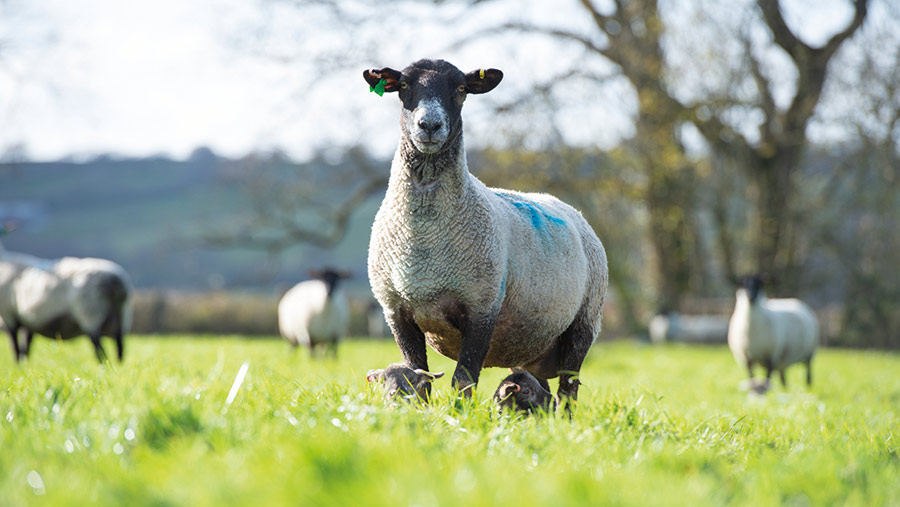 Efforts to grow income from lamb sales should start with having sheep in optimal condition at lambing and tupping, a farm trial has shown.

A Rothamsted study, which analysed how flock records relate to eventual carcass value, adds to growing industry advice on the importance of body condition scoring of ewes.

The trial, which took place on Rothamsted’s North Wyke study farm near Okehampton, Devon, ranked “predictor” metrics (see “What are the different types of metrics?”). It found the top three for economic benefit were:

The team suggested this was because ewes in good condition milked well and lamb growth rates were higher. This meant lambs finished faster and left the farm earlier.

A lower stocking rate for autumn grazing would flush ewes, help fertility and scanning, or build up grass covers to minimise wintering costs.

This would knock on to the next year, taking ewes into tupping and lambing in good condition.

By contrast, the three metrics of least economic benefit were ewe weight at weaning and BCS at tupping and weaning.

What are the different types of metrics?

The 10 “predictor” metrics were correlated with eventual lamb values to assess each metric’s relevance as a predictor of economic return.

Andy Jones of Rothamsted Research said the analyses showed a positive economic benefit from recording information on farm, but stressed that information gathering was seldom free.

Whether it be labour cost on larger commercial farms or taking up time and affecting the profitability of a traditional family farm, there is a cost to gathering data.

Speaking on a GrassCheck webinar earlier this month, Dr Jones said: “We are certainly not telling farmers not to record or to record less. The message is to focus in on data and consider what drives income and what you can change practically and cost-effectively.”

1. Time is short, so prioritise ewe data over lamb data

If forced to make a choice, focus on ewe body condition score (BCS) and weight at tupping and lambing because these affect carcass value and have other knock-on effects

Every farm and system are different, so look at flock performance to see what impacts earnings. The optimal number of predictor KPIs in the study was four. At North Wyke, this was ewe weight at lambing, ewe BCS at lambing, weaning weight and birthweight

Ewe weight at lambing: Don’t try changing the farm to lift a KPI if it’s impractical or costly to do so. For example, the biggest earning ewes weighed 84kg (range 69-86kg) at North Wyke, but breeding bigger ewes and putting condition son them increased maintenance and feed cost. The data showed ewes weighing at 77kg could earn almost as much

Birthweight: Also, while the heaviest third of lambs averaged 157.3 days to slaughter compared to the medium third of lambs, at 177.1 days, and the smallest third at 197.2 days, the practicalities of farming for heavy lambs would be outweighed by dystocia and possible increase in mortality

BCS: Ewe BCS at lambing could be manipulated with feeding but deferred grazing post-lambing or high-quality grass silage could be more viable

Birthweight: A small increase in birthweight at North Wyke could be investigated as it is an indoor lambing, terminal sire system. For an outdoor lamber, birthweight is best moderated or controlled