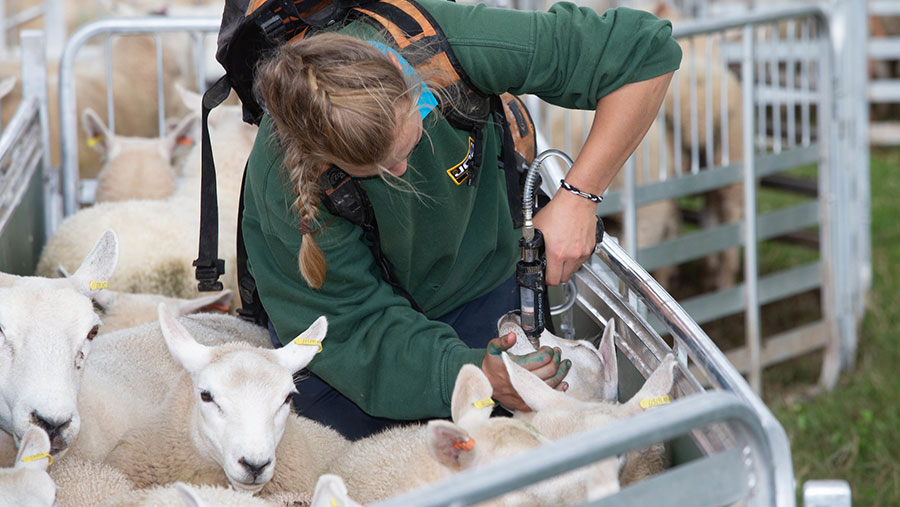 A project in Wales has detected resistance to one or more wormer groups on 98% of participating farms.

The initiative, which was fully funded through the Farming Connect Advisory Service, used a flock faecal egg count reduction test to establish whether resistance to anthelmintic drenches existed.

Testing was carried out last year between June and November on 49 sheep farms.

See also: How to test for wormer resistance in sheep

FECs were taken from at least 90 lambs that had not been wormed for a minimum of four weeks.

Once this baseline was set, lambs were split into four treatment groups with 20 in each group. They were dosed under strict protocols with either a white drench (benzimidazole), yellow drench (levamisole), clear drench (3ML) or moxidectin.

A sample was taken from each lamb by a trained Techion technician – this was repeated at between seven and 14 days later, depending on the type of drench used.

The samples were then sent to the laboratory to assess the efficacy of each wormer group.

Resistance was found to one or more wormer groups on 98% of farms.

Sheep specialist James Hadwin, of JH Agri Consultancy (AgriPlan Cymru), who delivered the service for Farming Connect, says the results are concerning. However, if the farmers take positive action to reduce their reliance on wormers on the back of their results, then they can achieve good worm control.

“At first sight, this seems worrying but, because the testing is relatively sensitive and accurate, it means that on many farms we are identifying resistance in the early stages.

“That’s great news for the farmers involved because it means if they are careful and take advice, they can maintain good levels of worm control,” says Mr Hadwin.

“The results in 2020 have shown that there is an issue with wormer resistance in the industry and that we need to act now.”

He hopes the project will encourage farmers to work more closely with their vets and animal health advisers to formulate a robust flock health plan.

“A team approach to this issue is always best. We need to protect the wormers we have available and especially protect the new wormer groups by using them strategically.’’

Farmers are advised to follow sustainable control of parasite in sheep (Scops) principles when treating sheep for worms, to prevent product overuse and development of resistance.