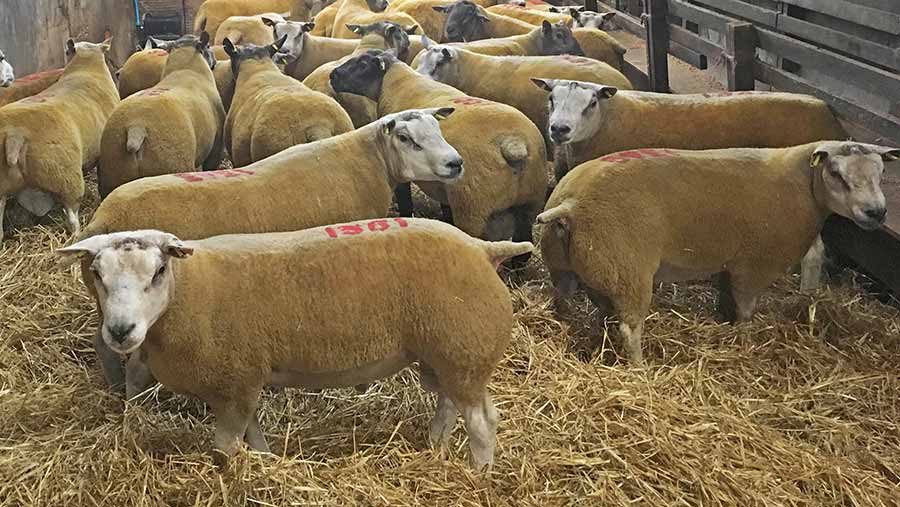 The NSA’s South West sale, in Exeter, allowed cross-bred entries for the first time in 2015 and has seen numbers more than treble from 18 to 65 this year.

Beltex-crosses in particular are being used to put conformation on a larger-framed sheep. Sales of this type of terminal sire have increased 50% at Kelso since 2008 while other crosses have more than doubled in throughput.

Elsewhere, modern composites like Sufftex, Easycare or Innovis are also growing in favour, suggesting hybrid vigour and longevity are becoming key attributes desired by some buyers.

On the ewe side, hybrid ewes have been marketed for decades as a combination of the prolificacy of a large-framed prolific sire on to a smaller and hardy hill breed to create mules.

Heterosis is also championed by sheep consultants who often advise that cross-bred males make the best teasers when vasectomised because they have hybrid vigour and last longer on the farm.

How to work out the cost of tups per lamb

He says that cross-bred terminal sires will generally combine shape and conformation from one breed with length and scope from another.

However, he urges buyers to ask questions about stock.

“Whatever breed you choose I recommend the rams should have been born easily themselves, from performance recorded flocks, reared on a forage system and not pushed too hard on concentrates before sale,” says Mr Jones.

He explains that heterosis is often seen best in a first-cross ewe but paternal heterosis is seen in cross-bred rams. However, it is not advisable to go beyond one cross from a terminal sire when retaining and breeding stock, but if this is done then maternal EBVs are advisable.

“Hybrid vigour or heterosis is generally seen best in a first-cross ewe where the two breeds are quite different, such as crossing a ram on a hill ewe then putting them to a terminal sire ram.

“Getting repeat customers is a sign that they work and some people prefer them to purebreds. They have a bit more size than a Beltex and some can almost get lambs away as fast as pure Suffolks.”

Hybrid vigour (heterosis) is the term given for the “extra” bit of performance in almost anything you want to measure in an animal, explains sheep geneticist Dr Jo Conington, Scotland’s Rural College.

Heterosis is known to improve longevity, vigour and fertility in first-cross (F1) animal, bringing a 2-3% performance gain in growth and 12% in maternal traits in the F1 animals.

However, heterosis usually leads to worse lamb uniformity in the second-cross (F2) generation.

“Hybrid vigour is a ‘non-additive’ part of performance that is not passed on in full to the next generation and is diluted if back-crossed to one of the original breeds,” explains Dr Conington.

“The amount of heterosis retained depends on the number of breeds involved in the crossing system.”

Dr Conington explains that a farm can expect a 2-3% performance gain for growth and 12% for maternal traits in first cross (F1) animals and the more genetically diverse the breeds, generally, the greater the amount of heterosis. 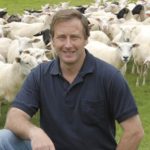 Combining crossbreeding with performance recording has allowed some customers to cut average days to slaugther by three days every time they buy tups form his sale, according to Sufftex breeder Peter Baber.

From two pure-bred Suffolk and Texel nucleus flock, Peter Baber began crossing for hybrid vigour in 2004 on the edge of Dartmoor. Now half the 80-100 rams sold each year are Sufftex.

He maintains the higher tupping ratios (80-120 ewes per ram) and greater longevity (5-7 working years) can get some cross-bred tups costing commercial farmers as little as 40p-50p a lamb some cases. Industry estimates range from around £1 a lamb sired up to £7.

He believes research and science are showing the value of performance recording and breeding functional rams that tup more ewes per lifetime.

“AHDB Beef & Lamb figures are showing that the daily liveweight gain benefits off grass that performance-recorded lambs have are worth £2.75-£3.50 a lamb more,” says Mr Baber.

Mr Baber’s approach is to breed from or sell the top 25% of rams, pricing them individually and correlating price to index.

Rams start at around £350 for a top 25% ram and go up to around £850. “Rams serve 80-100 ewes a year and hold condition while doing it. I would be disappointed by a ram that didn’t do four years; they should be managing at least five.

Cross-bred convert Jake Freestone initially went to Weir Park Farm to buy Texels to breed Texel-Cross ewes out of North of England Mules but has been impressed by the value of cross-bred terminal sires.

Now all terminal sires bought are Sufftexes, with the other half of tups being Innovis breeds to breed low-input replacements.

Tupping 80 ewes as shearling and averaging 500 ewes per life, the tups cost around £600 and are working out at a cost of 68p a lamb at a 175% lambing percentage.

“I partly tried the crossed rams out of curiosity,” explains Mr Freestone. “I was interested in the hybrid vigour and it seemed to be a good thing to try – and they have EBVs.”

Overbury manages to finish around 10% of lambs off Higher Level Stewardship natural grasslands on the estate by August at a 19.5kg carcass.

The bulk of fattening lambs go on to kale and stubble turnips where they achieve daily liveweight gains between 200kg and 400g.

“The tups have fitted in well, shown good longevity and have a bit more go about them,” says Mr Freestone. “EID and data recording shows there isn’t much to choose between them and the pure Texels for performance but cross-breds are better value.”