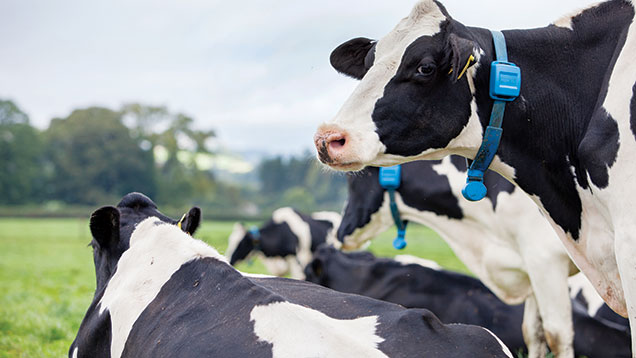 The adoption of precision technology has become customary on many arable farms for those seeking to drive crop yields at a more efficient cost. But dairy farmers are also taking advantage of the benefits it can offer.

It has also enabled him to expand the herd by 50 cows without having to increase staff.

Previously Mr Jackson was using heat detection collars on his 300-cow herd to observe heats before serving cows himself. But when the system needed updating he started to consider other options.

A fully integrated system was attractive so he decided to opt for Cogent’s Precision Reproductive Solutions. He started using it in the all-year calving herd in August 2014.

As soon as the cows calve they are assigned a Pinpoint collar, which is put on to enable staff to spot a reference heat, ideally at 21 days. Serving starts at 45 days post-calving and any animal not showing signs of heat during the 45-day voluntary waiting period (VWP) is presented for a vet check.

“We will start to intervene with an Ov-synch program if we need to,” Mr Jackson explains.

He says the benefit of the Pinpoint technology is cow activity is monitored more regularly, which prevents the team from missing heats.

Data is downloaded to a base station within the cubicle shed every four hours, 24 hours a day.

“It is a big improvement, because before data was only getting uploaded twice a day as cows were milked through the parlour.”

Each cow gets two services using sexed semen and one straw of conventional, but if they haven’t conceived on the fourth service they get served to a British Blue.

“We are using more sexed semen now because we are getting better conception rates and we can target cows more effectively,” says Mr Jackson.

He adds: “We have got some that go straight to beef – those that have had issues at calving and ones with poor fertility and legs and feet.”

Sires are selected by a Cogent WMS breed evaluator who visits the farm four times a year to score the herd and pick the best-matched bulls.

“We want easy calving cows that last with high health-traits, good feet and legs and I also like a bit of strength,” he adds.

The system’s cloud-based technology means everything can be accessed from mobile devices through an app to a smartphone or iPad.

“We used to write everything down on paper and then transfer it to the computer. But now myself and the staff have the app on our phones and we’re able to pull it up at any time to see cow activity and individual animal information.”

Cows are individually recorded and presented with colour-coded cards to make information simple to understand and use.

For example a cow’s breeding status is presented as:

Cows are inseminated after being pre-examined by the technician and are subsequently PD’d at 42 days. The collar is left on for one month in case the embryo is reabsorbed.

Mr Jackson says the service and its cloud-based software system has simplified record-keeping, making it a far less cumbersome chore.

“For instance, calves can be registered on the system and the information can be sent directly to BCMS.”

NMR records can also be uploaded into the system so it acts as a “one-stop shop” for all cow records, from yields, cell counts and calving records, to disease status.

Percentage of cows eligible for service that become pregnant in a given period (best calculated in 21-day intervals). Calculated by multiplying the herd’s submission rate by the conception rate.

The percentage of cows bred from all eligible cows following the voluntary waiting period.

A measure of the number of cows that have conceived from the animals served.

Where prostaglandin injections are given to synchronise ovulation.

“That element of it is brilliant because we are not recording things twice.

“It is also less time consuming for me and my staff because previously we were operating a DIY AI system and inseminating cows between us. But now they do all that.

“It has allowed us to gradually increase cow numbers by 50 over the past six to eight months without having to increase labour.”

It is also helping the team at Longpools Farm manage other aspects of cow health such as lameness and medicine use.

“If a cow is tubed or injected you can go into your phone, type in her number and add the information to the database and it feeds it back to the computer.”

Cows get locomotion scored every quarter as they exit the parlour and these scores are updated in the database using an iPhone.

“The beauty of it is it is all bang up to date and is backed up in the cloud in case my phone breaks.”

Monthly fertility stats alert the team to any problems and, if necessary, diets can be reformulated at the click of a button using a Keenan Pace box.

“Hefin [Richards], my nutritionist can actually alter the diets at his house and it will change the ration on the box with 24 hours.”

Mr Jackson says using the breeding technology has helped them to break out of a vicious circle.

“We aren’t getting fat cows anymore because cows are getting in calf quicker, milk is going into the tank quicker and they’re getting dried off at the right stage. That’s led to improvements in cow health.

“Cows are now in a better condition going into the dry period so they calve more easily.

“We were finding that when we had fat cows we had problems post-calving and that then leads to poor fertility the next time round. It is a downward spiral of challenges.”

With the milking ration costing £3 a head a day, Mr Jackson also expects feed savings to be made by getting cows in calf and dried off sooner.

He adds: “We will have many more cows calving a year and as soon as you see that it improves profits.”

Average days in milk has fallen from more than 200 to 183 so daily yields are higher because fewer cows are stale.

“We’ve been lagging behind our arable counterparts, but now dairy technology is catching up with the arable sector.”