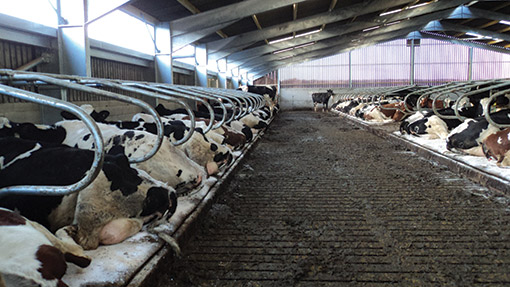 Use of slatted flooring in housed dairy systems could provide UK farmers with a slurry storage solution while bringing long-term foot health benefits.

Vet Owen Atkinson of Dairy Veterinary Consultancy, says there is a real need for a change in attitude towards slats.

“Dairy farmers need to start thinking differently about using slats. Traditionally slats have had a bad reputation for causing slipping or feet getting trapped in the gaps, but modern slats offer more solutions and are a more attractive option,” he says.

New British standards that set the gap between slats at 30-40mm for adult cattle have solved the issue of feet getting trapped.

Slipping can still be a problem on precast concrete, with grooving of slats also creating issues with concrete chipping.

However, rubber matting and the new design of some slatted systems can help prevent this problem.

Mr Atkinson says one of the primary benefits of using slatted flooring lies in keeping feet dry and making them less prone to digital dermatitis (DD).

“Digital dermatitis is the most common cause of lameness in the UK and costs about £75/case.

Most farmers probably believe digital dermatitis lives in the slurry, but that’s not the case – the reservoir is the cow.

The slurry damages the skin [on the feet] so digital dermatitis can penetrate and infection can take place,” he says.

As a result, the key to controlling DD is keeping feet dry and preventing cows from standing in slurry.

DD incidence is generally higher on farms that have poor slurry management or automatic scrapers that result in a big wave of slurry being pushed over the cows’ feet.

Floor space and overcrowding is often a contributing factor, so to address the problem a farmer could choose to reduce stocking density or increase space.

However, slats could also help alleviate the problem in existing dairy systems.

“You could put an 18in slatted channel down one edge of the full length of a cubicle passage. The amount of ‘fall’ you have for the slurry is a limiting factor, but any dairy with housed cattle on cubicles should think about it – it’s about getting slurry away from cows’ feet,” says Mr Atkinson.

Even on a system that uses tractor scraping, slats will help take urine away between scrapings, while a slatted channel will reduce the wave of slurry on automatic scraper systems.

Mac Mackie of Westertown Farm, Aberdeenshire, has retrofitted a 0.3m (1ft) slatted channel down one side of each cubicle passageway to help reduce the amount of slurry cows have to stand in.

This has helped halve digital dermatitis incidence over six years in his year-round housed, 300-cow herd.

“We were looking at ways to make feet drier as we were tending to get a build-up of slurry in the passageways.

By cutting out a channel, slurry is continually drained and slurry is pushed down the slats [over the channel] as the automatic scraper comes past,” says Mr Mackie of Mackie’s of Scotland ice cream.

Mr Atkinson also believes slats could be retrofitted in areas prone to high slurry build up. “I visited one farm where they dug out a cubicle passageway and put it all down to slats. This area lent itself to slats as every cow had to go through it on exit from the parlour, which meant there was a lot of traffic and slurry,” he explains.

Exit races from parlours – and in particular, rotary parlours – may also benefit from having slats fitted.

Larger cow numbers generally associated with rotary systems, coupled with a single-file passage on the parlour exit means this area is prone to slurry build-up.

Slats could help keep feet dry, and this slatted area could then be linked up to the slurry collection system in the yard.

However, Mr Atkinson says slats have a more significant role to play in new dairy cow buildings and believes anyone putting up a new system should think about installing them.

The study carried out by vet Owen Atkinson showed cows had a greater stride length on Surefoot slip-resistant concrete slats.

“From this we can presume cows will be more confident at showing signs of heat and there will be less slip injuries,” says Mr Atkinson.

This is significant considering results from a recent UK survey of 233 dairy farms, which estimated about 1% of cows are prematurely culled each year due to slip injuries.

The added grip on these particular slats was also shown not to have any negative effect on foot wear. Anecdotally, Mr Atkinson also says cows appeared cleaner on both old and new slatted systems.

Pressure on slurry storage was one of the main reasons the Glover family of Barnes Hill Farm in Staffordshire, invested in a new, fully slatted cubicle building for their 100-cow herd.

Jane Glover says improvements in cow comfort were the main driver for moving away from the farm’s cow kennels and investing in a new shed.

Furthermore, to meet NVZ storage requirements and have room to expand in the future, the added slurry storage was a significant bonus.

Having taken advantage of a Rural Economy Grant to help with the shed, the Glovers put up a 41.91×27.43m building with a suspended, non-slip slat floor.

The under-slat slurry storage tank provided enough storage for six months’ worth of slurry, parlour washings and run-off from the collecting yard for 200 cows.

“The slats protect from excess rain and it means for the first time ever we’ve got 6ft left in the pit [at the end of March], despite it being such a wet year,” says Ms Glover, who farms in partnership with her parents Ann and Gordon.

“It’s also cut labour. In the old shed we scraped out three times a day. Now we do it by hand once a week along the heel stones.”

Ms Glover says cows and heifers are more confident on the non-slip slats, and show stronger signs of bulling.

Foot health has also improved. “We don’t seem to have as big a problem with DD. Since December we’ve only had two cases of foul in the foot, when we’d normally have been in double figures.”