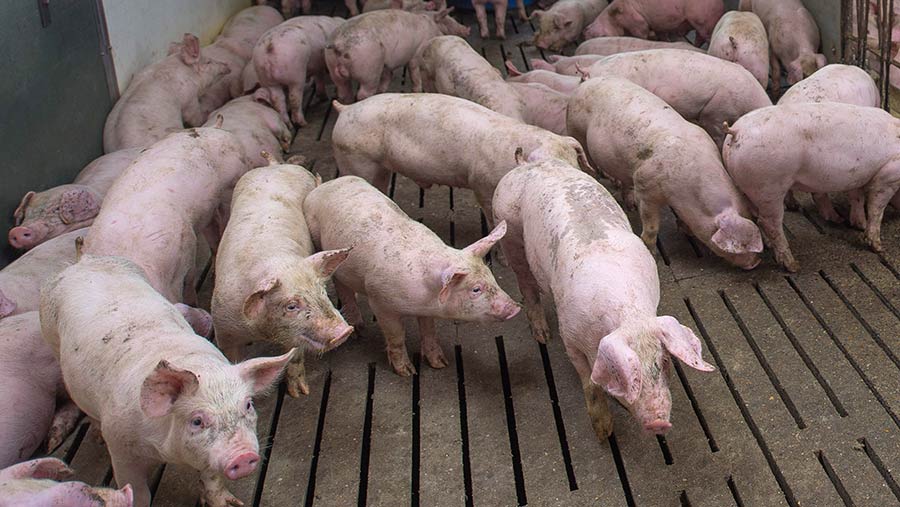 Mild acidification of slurry is a solution to help pig farmers meet targets to reduce ammonia emissions, as outlined in the government’s Clean Air Strategy launched earlier this year.

However, pig farmers should be exploring other options to help reduce ammonia levels and meet the targets, explained independent consultant Nigel Penlington.

Options for lowering ammonia emissions on pig farms include:

Mr Penlington said: “The Clean Air strategy is a huge juggernaut coming down the road for the industry.

“For many farmers, investment in some technology to reduce ammonia emissions may be the only way they can grow their business.

“Mild acidification of slurry and high-speed fans are generally a solution for a lot of pig farmers,” he said.

Mild acidification works by dropping the pH of the slurry to below 6.

When the pH is less than 6, the chemical reaction stops and ammonia is changed to ammonium, which doesn’t evaporate.

What studies looking at mild acidification have found

The easiest way to acidify slurry is in the pig housing as it can also improve air quality in the building for pigs and staff.

Slurry is pumped directly from the housing into a processing tank, where sulphuric acid is automatically added.

The dosage is controlled by pH sensors. The treated slurry is then pumped into the storage tank and back into the housing.

Pig producer Sam Godfrey, from Lincolnshire, manages 6,500 sows and is one of the first producers to install a mild acidification system.

He has installed three so far across different sites and has started work to acidify slurry on a further three sites.

The first systems were up and running in February this year and already he noted an anecdotal improvement in the air quality in the pig housing.

He said: “There seems to be less ammonia in the buildings and the pigs are coughing less.

“We are still waiting on the weights from the first batch finished since installing it, but they looked good,” he said.

Before installing the system, Mr Godfrey visited Denmark, where 20% of all slurry is acidified prior to land application.

“Legislation is encouraging us to reduce ammonia levels, so we have to look at ways to do this.

“Mild acidification has lots of benefits to pig health, improvement to the quality of the slurry, improving atmosphere in the buildings and reducing fertiliser costs.“

The biggest drawback is the capital outlay, explained Mr Godfrey.

“You are looking at a six-figure sum for the system, pipework, slurry separator and mixing tank.

“It can be difficult to retrofit, which is why we have installed a slurry separator for a better flow through the existing pipework.

“There are additional costs to factor in such as electricity and sulphuric acid.”

Mr Godfrey received a 40% grant under the Countryside Productivity Scheme to help fund the systems.