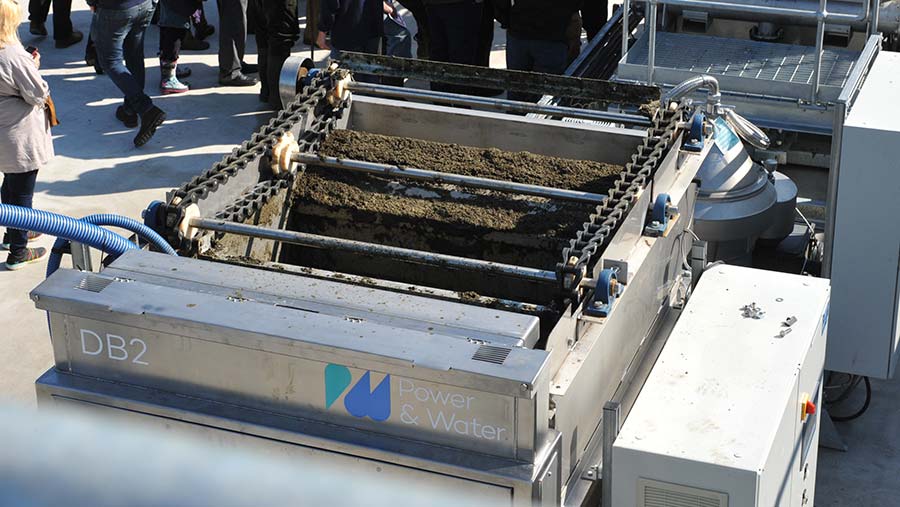 A dairy farm with a 500-cow herd could potentially make savings of nearly £50,000/year and reduce its risk of polluting watercourses by removing the water from slurry and purifying it, according to a Welsh farm trial.

The treatment plant at Coleg Sir Gâr’s Gelli Aur Campus is in its first week of operation and farmers have had an opportunity to see how it works and potential benefits of introducing the technology in their own systems.

More than 250 farmers from across the UK attended the joint Prosiectslyri Project and Farming Connect open day.

The equipment at Gelli Aur is processing 35t of slurry daily and is already exceeding expectation.

The company behind the technology, Swansea-based Power and Water, had anticipated extracting 80% of liquid from the slurry, but is achieving 90%.

The purification process needs further work – the filtered water is not yet clean enough for discharge into local watercourses or to re-use on the farm, but this is within reach, says Gareth Morgan, Power and Water’s chief executive officer.

“We are refining the processes as we go along,’’ he explains. “The treated water does need analysis before being discharged. We are working with Natural Resources Wales to define discharge quality parameters.”

The system works by pumping slurry in its original form from the cubicle housing into a separator.

The solid material, a 10th of its original volume because the water has been extracted, drops into a storage area below the separator.

Once the holding area is full, this stackable material is scooped up and stored in a covered area, ready for spreading.

The filtered liquid, which is around 4-5% dry matter (DM) once it has been through the separator, passes to another part of the plant, where a patented system of oxidation breaks down the ammonia to nitrogen and hydrogen and removes those remaining solids, which are routed back to the front-end of the treatment process for adding to the compressed slurry beneath the separator.

There are two separation systems being trialled – one uses centrifugal force to remove the solids, and the other, a screw press filter, forces slurry through a mesh screen.

“We will establish which produces the optimum results,’’ he explains.

At Gelli Aur, with its 500-cow herd, it could mean annual savings of £16,908 on bagged fertiliser due to the higher nutrient content of the compressed slurry and better use being made of these nutrients.

The project will seek to confirm these estimates, and assess the nutrient value of the dehydrated slurry when applied to the land, over the next two years.

Re-using the water and reducing spreading and diesel costs would result in further cost savings of £32,296.

Slurry is a nutrient for grass but a pollutant in rivers and lakes so reducing its volume while producing a good-quality fertiliser will minimise the risks associated with nutrient storage and management on Welsh farms, says Dewi Hughes, technical development manager at Farming Connect.

John Owen (pictured below), farm manager at Gelli Aur, who is managing the project, says the farming industry is very aware of issues associated with on-farm nutrient management. 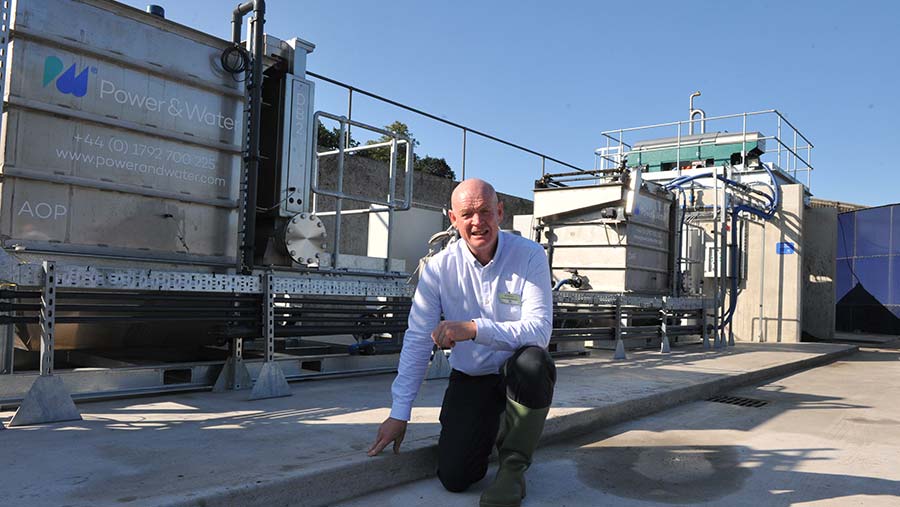 “As an industry we are taking the lead, adopting new technology that has been used in other sectors to make better use of the nutrients we produce.”

The system, says Mr Owen, needs to be appropriate to all farms, whatever their scale.

“It is not just about the big boys, it has to be suitable for everyone. If it wasn’t it wouldn’t make much of a difference to overall water quality.’’

Farmers Weekly will be bringing you updates through Farming Connect as the project progresses and results become available.