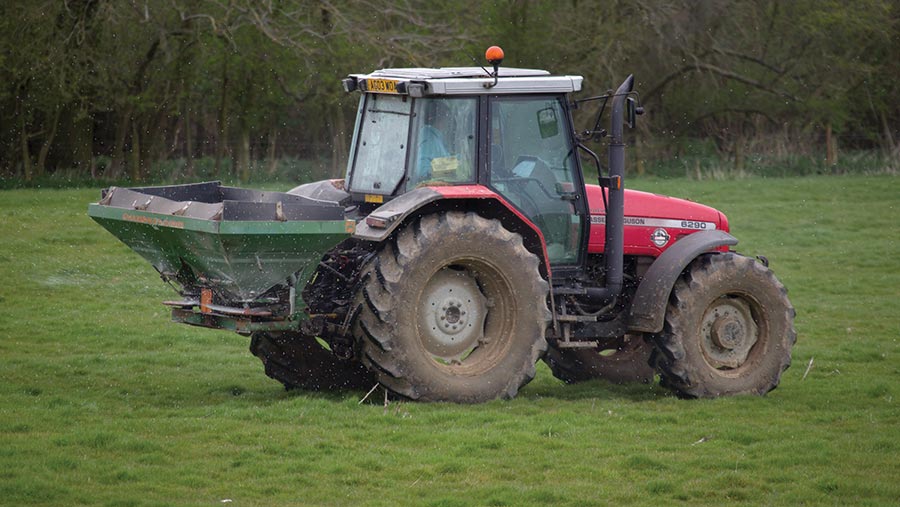 The techniques, underpinned by a combined package of computer and practical analysis, have already helped farmers reduce inputs and adhere to nitrate vulnerable zone (NVZ) rules.

Agronomist and sheep producer Ryan Came-Johnson says the precision methods used were more commonly seen on arable farms in the past. But uptake among livestock units was increasing, with more than 50% of his grassland clients, through the Hutchinsons group, already signed up.

It is not just the larger farms, but also smaller acreages where squeezing productivity and profit from limited acreages is increasingly important for business resilience, says Mr Came-Johnson.

One of the drivers has been increased fertiliser costs, which has forced farmers to review their traditional approach. “Historically, fertiliser has been spread on grassland units in a relatively standard way.

Slurry or farmyard manure (FYM) was also applied, with little knowledge of its nutrient profile and no calculation of grassland requirement, risking nutrient losses.

A second key driver has been tighter legislation. Livestock farmers, particularly within NVZs, are looking more carefully at what they apply.

Under the rules, from 1 January each year, nitrogen from grazing animals and manure spreading must not exceed 170kg/ha.

It’s a precise amount and impossible to know whether it has been met or broken without detailed analysis and records, Mr Came-Johnson says.

This is where the package developed by Hutchinsons, known as Omnia, comes in.

How does Omnia work?

Omnia establishes an accurate picture of a farm’s nutrient requirement and the availability from slurry, FYM and grazing stock. The process begins with a programme of soil analysis. Initially, 25% of the farm’s grassland is analysed.

This is repeated annually over four years to build a picture across the whole unit. Soil sample results are imported into the software programme from the lab analysis and allocated to each field or grazing block.

At the same time, the nutrient levels in FYM and slurry can be analysed. Data on livestock numbers, types and age ranges are added, along with tonnages of FYM or slurry produced.

Physical features such as boreholes, wells and muck heaps can all be mapped using the programme. 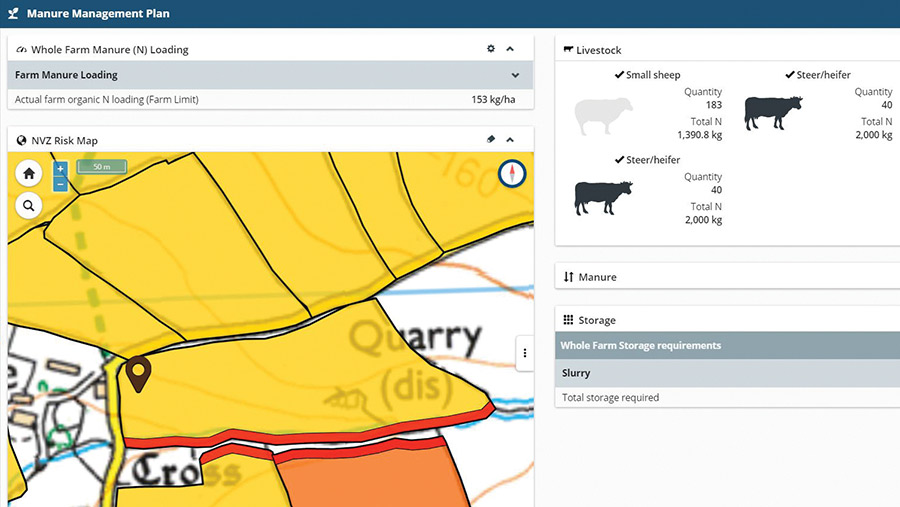 From the information, the required nutrients and application rates can be determined. The farmer is then presented with a detailed nutrient plan on a desktop, tablet or as a hard copy.

This can be used as a shopping list on a field or block-by-block basis, for whatever extra nutrient is needed as a top-up to the organic fertiliser on the holding, explains Mr Came-Johnson.

Records are then logged on the system, which is fully compliant with NVZ regulations, cutting out the paperwork and saving management time for farmers.

This removes the guesswork and provides farmers with peace of mind that they are not going to break any rules.

As well as the peace of mind and savings in paperwork, farmers are also seeing improved stock performance and reduced input costs.

“We are finding that many farmers are applying the wrong ratio of N, P and K,” Mr Came-Johnson reports.

For example, one farmer had applied 20.10.10 each year for 50 years. But the system highlighted phosphate levels were good and potash needed bringing up.

“This allowed us to cut out phosphate, which is one of the most costly elements of the fertiliser, and address any deficiencies,” he explains.

The set-up can also be used to log grass leaf sampling results to assess levels of trace elements such as selenium and cobalt.

On Mr Came-Johnson’s farm near Helston in Cornwall, lamb performance was lacking and a lot of the flock had mucky rear ends.

Detailed soil sampling and mapping through the programme were combined with blood testing, grass sampling and faecal egg counts to identify the problem.

Egg counts revealed there was no worm burden, but the soil and plant tissue samples highlighted areas of the farm with cobalt and selenium deficiencies.

Mineral drenches have since been applied to offset the poor cobalt and selenium levels, and average growth rates have risen by 90g a day.

The trace elements and improved grass quality has also seen scanning results jump from 170% in-lamb, prior to the soil analysis, to 207% this year.

Cornwall-based beef and sheep farmer Jonathan Strout has recovered the costs of the Omnia package within months of the first soil sampling.

The farm’s 130 cattle are bought in as calves and sold as forward stores and graze the 48ha unit along with a flock of early-lambing Dorset cross Mules.

“We have always applied N, P and K from 20.10.10 bagged fertiliser, but after discussions with Hutchinsons wanted to develop a more targeted approach,” Mr Strout says.

He signed up to the Omnia package in January this year and one quarter of the farm’s silaging and grazing fields, were soil sampled. Results showed pH levels were good at between 6.2-7.1, nitrogen and phosphate were also acceptable, but potash varied hugely.

“The visualisation of the farm is very powerful and left us in no doubt about the fields with deficiencies as the low K scores showed up bright red.

“The red areas were the silaging fields. Unbeknown to us, our fertiliser programme was failing to address the drain on nutrients from successive cuts,” Mr Strout says.

On areas where the K was sufficient 25.3.3 plus sulphur was applied.

“Cutting down on the phosphate – the most expensive of the nutrients – saved us about £250 on our fertiliser bill and paid for the package within the first four months,” he reckons.

The tailored nutrient plan is also helping grass growth on the silage fields. The next stage is to use the extra grass growth by adopting a paddock grazing system with higher stocking rates and increase in the ewe flock to 300 head.