Slurry storage in these NVZ-regulated days involves rather more than just pumping the stuff into a large tank and awaiting the arrival of spreaders.

It’s now all about preventing smells, stopping ammonia evaporating and discouraging the dilution of slurry by rainwater. And the answer to most, if not all, of these problems is lids.

It may seem extravagant to invest in a cover for a slurry store, but there are now sound reasons for doing just that. In fact several northern European countries made covers mandatory more than a decade ago.

For a start, anyone hoping their slurry will provide a cost-saving alternative to inorganic fertiliser won’t want to see valuable ammonia wafting off into the atmosphere. But without a suitable cover, up to 10% of the nitrogen content of slurry can be lost.

Essential as ammonia retention is, there is another important factor to consider. Depending on where you farm, there is going to be a significant volume of water dropping into the tank in the form of rainwater.

Simple maths reveals just how much water there is likely to be. An annual rainfall of 100cm (40in) falling in a 20m diameter tank will add the thick end of 320cu m of water.

This not only dilutes the slurry but also means extra work to empty the store.

Using, say, a 12cu m tanker, that extra 320cu m of liquid could mean another 26 loads has to be transported and spread.

So what’s the answer? There are several covering systems available. The simplest and cheapest way of reducing ammonia loss is to allow the lagoon to crust over and create its own cover. But where slurry is being added on a daily basis this is not going to work.

Covers that float on the slurry and create a barrier for gas emissions have advantages when it comes to price and ease of use. The simplest floating barriers use lightweight clay aggregate like Leca or foam glass which can be easily installed, doesn’t cost much and can accommodate all shapes and sizes of store or lagoon. Pumps are apparently also happy to cope with these materials.

On the minus side, users have to factor in a 10% loss of material each year and there is no protection against rainwater. 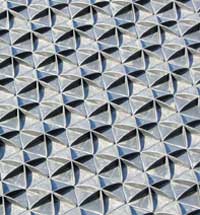 It’s also possible to use floating plastic plates like the Hexa-Cover system (left) imported by Suffolk firm Tramspread. These are hexagonal 220mm wide plates that mesh together to form a barrier capable of preventing up to a 95% reduction in emissions. But, again, there’s no rainwater protection.

If you want an impermeable floating cover which will prevent rainwater mixing with slurry, Jackson Pumping Systems has a plastic sheet system which is tensioned around a plastic hoop – the whole sheet rises and falls with the level of the slurry.

Rainwater needs to be pumped off the sheet and there are likely to be problems when it comes to obtaining access for de-sludging operations. However a built-in hatch does allow access for agitation prior to emptying.

A slightly different principle is involved with Cunningham Covers’ made-to-measure store covers (left). Made from polyester woven fabric with a PVC covering to protect against slurry and UV light, the covers are usually supported on a central pole and attached by straps to the diameter of the store.

Cunningham points out that it’s not just a matter of “erecting a tent” over the top of a tank – consideration needs to be given to loadings from snow and high winds.

The company also adds that provision for rainwater run-off should be taken into account; it’s no good channelling it into a tank and then mixing it back with the slurry, it points out.

Such systems may not be suitable for all stores – they need to structurally able to stand the forces generated by a cover which may be of some considerable size and weight.

To provide access for agitation during emptying, a removable hatchway is incorporated in the design and is usually positioned near the top of the steps and platform.

A word of caution here: Do not even think of entering an enclosed slurry store, before it has been properly and thoroughly ventilated. The gasses which build up inside can be lethal.

And finally, there is one store covering system which does not rely on central poles for support but, like a bouncy castle, uses air pressure to create and retain the shape of the cover. 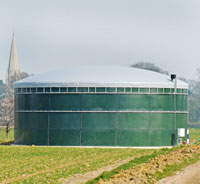 The Genap Airhat store cover (left) is made in Holland by Genap and marketed in the UK by Skipton’s Reliant Installations. Made from a tough polythene material it is spread across the store and anchored down by a network of straps attached to a ring positioned on the outside of the store. Air is then pumped in to raise the material and create a neat dome-shaped cover which sheds the rain and, it is claimed, reduce ammonia loss.

Genap adds that the system can be fitted to all new or existing slurry tanks without any structural modification. Power required for the electric pump which runs continuously, is about 150W.