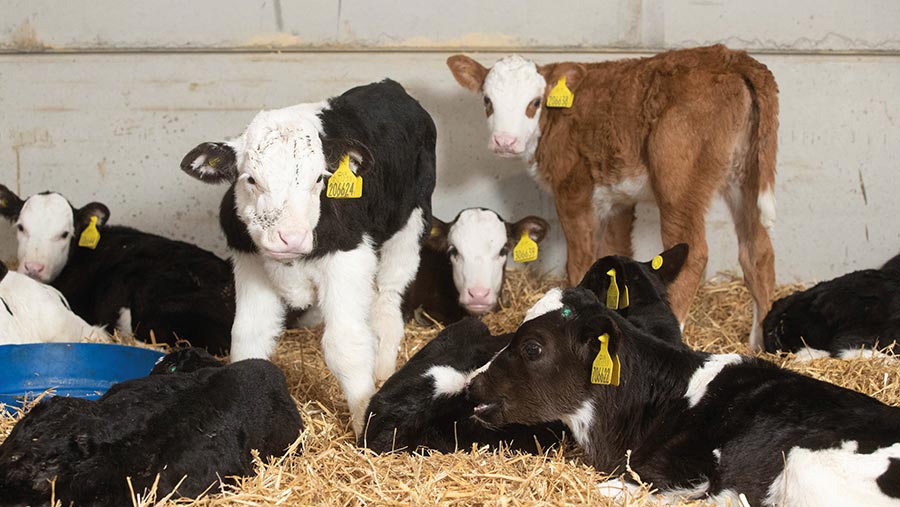 A new monitoring and management tool to detect bovine respiratory disease (BRD) in its early stages is being launched next month.

It has been developed to pick up sub-clinical BRD, so that affected calves can be isolated, minimising the spread of the disease, and treated sooner, reducing lung damage.

Clinical cases of BRD are the tip of the iceberg – a 15-month study by Zoetis showed 68% of apparently healthy calves had lung lesions associated with reduced weight gain.

How the system was developed

Earlier research at SRUC focused on the data needed to identify sick calves. This showed that calf activity and feeding behaviour differed between healthy and sick calves before the development of clinical symptoms of BRD.

Sick calves spent more time lying down and had longer bouts of lying in the three days before and after the “disease peak”. They also made fewer feeding visits and spent less time feeding each day during these periods.

The researchers concluded that there was scope to use these changes in behaviour to develop a health alert to get the farmer to check the calf, and that a system could be generated to help monitor and manage calves.

Well-Calf gathers information at three levels via an ear tag:

Any day-to-day anomalies in activity, behaviour or environmental conditions, and any differences between individual calves and their groups, are relayed to the farmer via an alert on their mobile device.

An assessment can then be made, and treatment given if needed.

This information can also help support management decisions about trends in sickness, the robustness of protocols, and potential changes in infrastructure, as well as assessing performance across groups of calves.

Monitoring of 170 calves with tags was carried out using SRUC’s automated calf-feeding facility and bucket-feeding pens for the pre-weaning period.

At the same time, calf health was assessed using the Wisconsin health-scoring system, which scores individual calves on a scale of 1-3 based on their demeanour. The total score indicates a need to treat.

Established in 2005 and rated as the gold standard of clinical assessment, this gives accurate results but requires handling and can be very time consuming.

Smartbell has so far studied all the alerts that the system generated and compared them with the Wisconsin scores and other health conditions recorded for 118 of these calves, as well as 100 additional calves on two commercial farms, one dairy and one dairy-beef rearing unit.

So far, performance is consistent. The correlation with scours and pneumonia across all animals and all days was measured and there was a positive predictive value (the probability that a calf actually has the disease) of 80% and a negative predictive value (the probability that an animal definitely doesn’t have the disease) of 85%.

Reducing mortality saves £300 for each death avoided, and reducing severe pneumonia saves £165 a case, according to Jose Chitty, one of Smartbell’s founders.

Well-Calf is due to launch in December. A starter kit, with 20 tags, the gateway that interfaces with the tags and the internet, and full-service support, costs £1,500.

The importance of early detection

It is very difficult for farmers and vets to spot calves with BRD in its early stages. This is because changes are slow to develop.

In addition, calves are programmed to hide illness because in the wild a sick calf would have been picked off by a predator.

The economic impacts of poor calf health include calf losses, veterinary treatment, increased labour, and poor growth rates, both as calves and later in life.

Because sub-clinical BRD is hard to detect, there is a risk of either recording false positives, resulting in increased treatment rates and antibiotics use, or missing cases, leading to delayed treatment, reduced cure rates and compromised welfare.

The risk of disease spreading is also increased. The challenge is to pick up these more subtle cases.

“If you minimise disease in the first 10 weeks, you gain health and efficiency in later life,” says Parklands vet group clinical director Eamon Donnelly. “But when the lungs are damaged, they are damaged for ever.”

The past few years have seen a growing interest in smart farming technologies, but they haven’t been widely explored in youngstock, according to Carol-Anne Duthie, head of SRUC’s beef and sheep research centre.

There is a lot of potential, she says – the health status of dairy-beef calves, which account for 50% of UK beef production, varies widely, and disease incidence and antibiotics use are high.