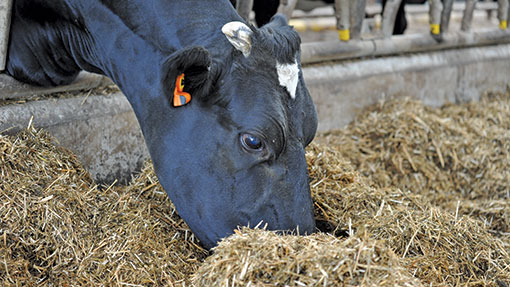 Ear tags are no longer just about identifying cows, the latest smart tags have sensors which constantly monitor their health, fertility and nutrition, and alert farmers by phone of any health problems.

This technology helped Stephen Morse pick up cows in his Holstein Friesian herd that were at a high risk of rumen acidosis before it was too late.

He had changed the feed ration of his high-yielding herd on the advice of a nutritionist, which resulted in a reduction in fibre intake. At that time, he was trialling an electronic ear tag sensor system, which records cow movement associated with eating.

“We thought the change in diet was the right one at that time, but the cows responded badly,” recalls Mr Morse, of Capel Farm, near Carmarthen.

“The system alerted us that the eating pattern had changed and we knew we had a problem. We immediately switched back to the original diet.

Within seven days we had two or three cows that went down with acidosis, but it could have been far more serious had we not acted when we did. We caught the cows early and were able to treat them promptly.”

Mr Morse runs a fully housed system with his parents, Roger and Jean, partner, Nicola, and sons, Morgan and Joseff. The 130-cow herd calves all the year round, yielding an average of 11,300 litres.

The family was keen to improve heat-detection rates and trialled the Agis CowManager SensOor. This double temperature sensor takes multipoint measurements and also records movement specific to eating and ruminating, as well as walking and oestrus activity.

Wifi routers gather data from the sensor and relay it back to a central coordinator, delivering information to Mr Morse’s computer.

If there are deviations from the herd’s normal pattern, an alert is sent to Mr Morse’s computer. The warnings are flagged up in three colours, with red alerting him a cow needs immediate attention. Alerts can also be sent to smartphones.

Following a two-month trial, the Morses invested £14,000 in installing the new system, fitting the whole herd with ear tag activity monitors. Every animal is tagged as soon as she has calved for the first time.

“It allows me to identify potentially sick cows before visible symptoms appear and it means they are treated earlier. Because of this, we can often avoid a drop in yield.”
Stephen Morse, dairy farmer

“Often cows will come into heat overnight and are only on heat for a couple of hours. Previously those cows were being missed,” he explains.

Although Mr Morse can’t put a figure on the improvement in heat detection rates, he is confident they have improved considerably. He also spends less time observing cows.

The system gives farmers the option of buying modules for fertility, health and feeding separately. Mr Morse chose to buy all three and says he can keep a close eye on the health of the herd, because it allows him to quickly identify sick cows.

The sensor enables him to see how long a cow spends ruminating 24 hours a day. He can monitor how the herd reacts to changes in the ration and make adjustments faster than waiting for a milk response.

By combining temperature with activity, Mr Morse can see how often the cow is lying down and chewing her cud, or if she has a temperature.

“If a cow is running a bit of a temperature we can catch her before it gets too high,” he says. “Also, if a cow isn’t ruminating, we can treat her immediately, which means she is less likely to get a displaced abomasum and need an operation.”

Previously, a drop in milk yield might have alerted Mr Morse that a cow was unwell, but this was not always spotted.

Before he installed the system, he had been in charge of every milking, but he now employs a new member of staff to milk in the mornings.

“The new system definitely helps from a management point of view. I can rely on it to give me the information I need when I am not in the parlour.

“It allows me to identify potentially sick cows before visible symptoms appear and it means they are treated earlier. Because of this, we can often avoid a drop in yield,” he says.