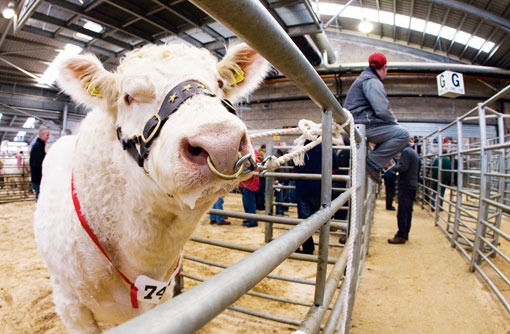 As the spring bull buying season kicks off, Jeremy Hunt takes a look at some of the decision factors when buying a bull.

Don’t “penny pinch”, don’t make a rash decision and don’t underestimate the importance a bull’s performance figures can make to the profitability of your business – just some of the key considerations that make bull buying one of the most critical investments of the beef production cycle.

And with cattle values continuing to rise, the start of this spring’s bull buying season is focusing an even greater need for buyers to adopt a strict and systematic approach to bull purchases.

Getting it right can bring a significant improvement to beef margins – whether selling suckled calves, finished cattle or even breeding replacement females. Getting it wrong – and dead calves caused by calving difficulties in a suckler herd will potentially cost you about £800 a time – making a big hole in bottom-line profits.

Faced with making the largest single “stock spend” of the year, the purchase of a bull should be made well in advance of it actually being needed for work, but ample time should also be given prior to the sale to study the catalogue in detail.

“It’s certainly time well spent and if it means you buy the right bull instead of the wrong bull, the benefits over its working life can make a marked impact on the profitability of your business, says beef specialist with the Scottish Agricultural College Ian Pritchard.
“The time and effort put into selecting potential sire purchases – prior to the sale and on the day – cannot be underestimated,” he says.

Studying the catalogue and a bull’s EBVs

Studying the catalogue ahead of the sale is essential to assess the Estimated Breeding Values (EBVs) – and how they compare with the breed average – of the bulls entered and to make an initial selection of potential purchases based on the figures that will most suit the bull’s role in your herd.

“Mark the bulls that have EBVs in the top 10% for the breed for the traits you feel are most relevant to your needs, but in all cases calving ease is very important.

“But be aware that if the bull’s job is primarily to breed replacement females, a high growth rate EBV could end up producing daughters that are too big. Bulls for this job can have a growth rate EBV in the top 25% because growth isn’t a priority trait that’s needed, whereas they must have a calving ease figure in the breed’s top 10%.

“Gestation length is another critical EBV figure for bulls bought to breed females as suckler herd replacements. Sires that lengthen the gestation period and upset the calving pattern can prove very costly so it’s important to realise that practical herd management issues can be tackled at the very root cause by selecting the right bull for the job.”

With greater understanding among beef producers of the important role EBVs can play in terms of performance and profitability, competition for sires with good “figures” is expected to be stronger than ever this spring – which is why breeding experts are stressing the importance of arriving at the sale fully aware of the bulls that a buyer feels need closer inspection.

“Identifying too few bulls prior to the sale and ending up buying a bull on its looks alone rather than making a complete assessment of its figures and its conformation is a trap many buyers fall into – and unintentionally buy in a panic.

“High growth rate and ease of calving are the key traits for suckled calf producers, but expecting a bull to do two jobs – produce good “growy” calves and a crop of replacement heifers – is a tall order because the sire traits needed aren’t the same,” says Mr Pritchard.

For newcomers to buying a bull using performance figures it’s important to know how to strike a balance between all the traits under consideration. And to do that Mr Pritchard advises close scrutiny of the coloured charts now sited at sales above the stall of each bull.

“These show clearly how the bull is ranked. The further the trait line is to the right hand side of the chart the better the bull is for that trait compared with the breed average. So that gives buyers a quick and easy way to assess individual bulls simply by walking along the stalls.”

Those buying a bull at an official sale this spring are advised by vets not to turn it out for work without first allowing it to “melt” naturally and lose some of its pre-sale conditioning. Ideally, bulls should have at least two months “wind down” before being used, but that usually means the animal has gone beyond its post-sale warranty period.

Vets suggest a fertility test is undertaken when the bull arrives home to avoid any issues that arise once the bull is turned out with cows and also for the peace of mind of the purchaser.

Cumbria vet Chris Swift, of Frame Swift and Partners at Penrith, says bull buyers who haven’t bought at a major sale before should talk to their own vet about the importance of the various herd health schemes and even consider speaking to the owners of any bull they are interested in ahead of the sale.

“If bulls are identified in the catalogue before the sale it’s perfectly acceptable to contact the owner and see if he will allow you to speak to the farm’s vet. If he has nothing to hide and is agreeable at least it provides an opportunity to discuss health issues,” says Mr Swift.

Although bulls offered for sale will have passed the vet inspection, Mr Swift advises buyers to look closely at legs when evaluating bulls and to take account of testicle size as an indication of fertility.

“Even though a bull may have a semen test certificate proving his fertility, that doesn’t mean he can actually do his job. So although we advise newly purchased bulls to be put into isolation for about three weeks, it is worth allowing the bull one natural service to ensure that he can mount the cows and actually serve it. It’s no good finding out when the warranty has expired.”

Douglas and Linda Graham, who run 100 pedigree Limousin cows in their Burbank herd near Stirling, say newcomers to buying bulls at major sales should study the catalogue well in advance to select bulls they feel best suit their needs.

“It’s not just about figures. In my opinion, a bull has to fit the bill in terms of conformation as well as figures, but the EBV data gives buyers the opportunity to buy bulls with the specific traits they require.

“So if you need a bull to produce finishing cattle you want high growth rate and good muscle depth EBVs; if it’s a bull to breed females focus on the milk figures and if you are producing stores you want a bull with a good growth rate at a young age,” says Mr Graham.

Farm manager Patrick Lambert, who uses Charolais bulls on the suckler herd at Grieg Farms, Fife, advises anyone taking account of EBV figures of potential bull purchases at this year’s spring sales to take careful note of the accuracy values.

“It’s critical and shouldn’t be underestimated. Look closely at the accuracy value for all the traits and in particular those that are most relevant to your buying criteria. If accuracies are 30-40% they aren’t good enough; I want an accuracy of 55-60% when I’m considering a bull’s EBVs and there are still a lot of bulls that don’t achieve that.

“And my second piece of advice would be to make sure you know who you are buying from and that they have a good reputation. If you’re prepared to make a big investment in a bull you need to be sure any problem will be properly and fairly dealt with,” says Mr Lambert.

A suckled calf producer from Eire, who asked to remain anonymous, reckons high ranking EBV bulls will meet a very strong trade at Stirling. He says UK beef producers are “very lucky” to have performance figures available to help them buy the best bulls they can afford.

“Here in southern Ireland we only have a combined performance figure for bulls, we don’t have individual rankings for traits. I’ve got used to buying bulls of moderate shape to try and avoid calving problems, but the EBV figures will give me confidence to buy an easy calving bull at Stirling without compromising on growth.”

This week, Farmers Weekly reporters Aly Balsom and Gemma Mackenzie, along with photographer Tim Scrivener, will be at Perth Bull Sales bringing you up-to-the-minute information and pictures from the ringside. We will also be posting daily video interviews with United Auctions auctioneer David Leggat online, as well as speaking to buyers and sellers around the ring and bringing you some predications about the day’s trading. Keep up to date by visiting the Taking Stock blog