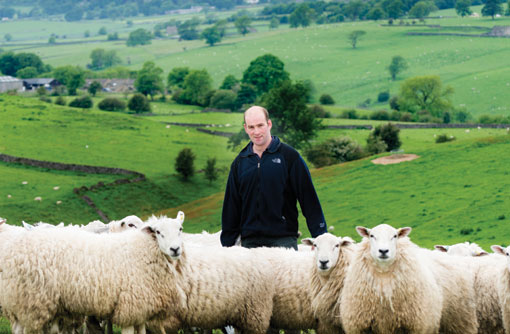 There are many great opportunities for young new entrants to get involved in farming, and for one North Yorkshire producer, it was a passion for sheep that marked his entry into the industry.

Simon Kavanagh, aged 35, has moved on leaps and bounds from being a young lad with a couple of sheep and some hens, to now running an extensive mixed enterprise at the tenanted West Berwick Farm in Draughton near Skipton.

“Farming is something I’ve always wanted to do since I was a little boy; it’s a lot of hard work, but if you’re interested in something you are much more likely to do well in it,” he says.

“When I came to this farm two years ago I only had sheep but I have built up a very mixed enterprise. I’m interested in all the different sectors and it spreads the risk as well as ensuring cashflow at different points in the year.”

His interest in farming resulted in him working on a small mixed unit in Eldwick when he was at school, before studying land and farm management at Harper Adams University College. Since then he has worked at several units including NSA chairman John Geldard’s farm in Kendal, Cumbria.

“I was fortunate that my parents had a tiny bit of land which I started out with, and in between having jobs, I built up my sheep numbers and managed to take on more land,” says Mr Kavanagh.

“I was then working for pig producer Mike Barker in Lancaster and was lucky enough to be able to rent grazing land from him. I then took on this farm in June 2010, and my brother Michael came on board to help to progress the business, enabling us to work together.”

He says the challenges he has faced getting where he is are the availability of land and financial backing. However, through hard work and determination, he now has a steady future ahead of him at West Berwick Farm after forming a limited liability partnership with the farm’s owner.

“If you don’t own land or property and you are trying to do it all of your own back, it’s a bit harder; I had to build up quite a lot of stock before I took this farm on. Me and the landlord have formed a partnership for the land – all stock, machinery and working capital is mine and they just put in the farm.

“From where I started to taking this farm on was quite a big hurdle. We had to convert all of the old cattle buildings at the farm, and did most of the building work ourselves. But now we are using all the building space efficiently and spreading the risk of the business.”

So what advice does he have for others wanting to get into the industry?

“I think sheep are a great way to get started in farming because, other than the purchase of the actual stock, you don’t need much else – there’s no need for a lot of expensive, flashy equipment to get started,” says Mr Kavanagh.

“If people want to get started it’s absolutely critical to have, in the first instance, experience. Business planning is also important because if it doesn’t work on paper it won’t work in practice.”

He says people should be prepared to work hard and make sacrifices in order to succeed. “There’s a lot of hard work and you have to watch what you’re doing with your money to progress, but it’s very rewarding.”