Cattle breeders are being advised against purchasing a Limousin bull’s semen straws until the British Limousin Cattle Society (BLCS) can verify its dam.

DNA testing work is ongoing to clarify a parentage identity issue for the 24,000gns Ballinloan Jaegerbomb, BLCS members were told in a letter.

The BLCS said the results from the DNA tests will be communicated to breed society members when information becomes available.

Farmers Weekly contacted the breeder, who did not want to comment at this time. 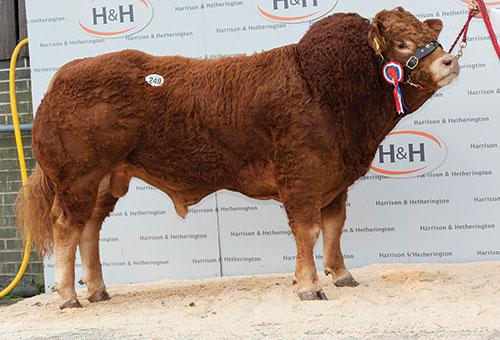 The letter said both the Ballinloan herd is “taking all steps to help in identifying the dam” and that the current owner – the Gunnerfleet herd – was in agreement and full support of the BLCS statement and the action being taken by the society.

The letter, sent out by the society earlier this month, said there was “no implication, impropriety or wrongdoing” on the part of the bull’s current owner in connection with this matter.

Taurus data states the bull was born on 6 July 2014 and had his first progeny registered in October 2016; one year after being crowned junior champion at Carlisle.

In the meantime, the BLCS is advising members as follows:

Breeding stock: The BLCS has advised no further purchase or use of semen from this bull from the number of outlets it is available from until further notice and to note this issue at any future sales or purchases of cattle sired by Ballinloan Jaegerbomb.

New calves: Pedigree calves by this sire can still be registered and put in the society’s “holding tank” but they “will not be fully registered until the situation is resolved”.

Calves already registered: According to the Taurus database, there are 93 progeny registered from 22 October 2016 onwards.

All progeny registered to the bull will be temporarily suspended in the Limousin Herd Book until a resolution is reached and members owning such animals will be contacted by the BLCS as soon as the situation is verified.

The letter, signed by BLCS chief executive Iain Kerr, said: “The society understands the concern this issue will cause and for this reason has brought it to members’ attention at this early stage. All members will be kept informed as the origin DNA enquiries progress.”