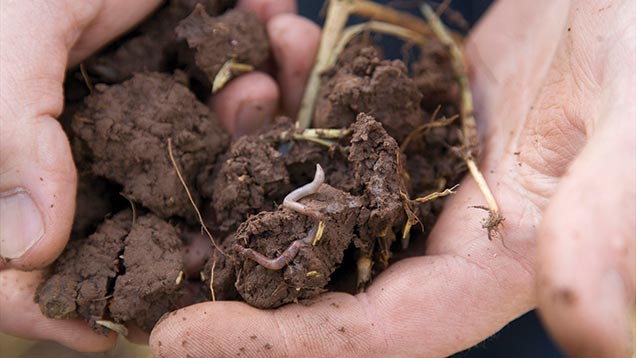 After crop yields on one field continued to worsen for beef and sheep farmer Duncan McEwen, despite receiving tonnes of manure, he began searching the farming forums for help.

This is where he first heard about the Albrecht soil test – an in depth test looking at soil nutrient balance.

“It’s so simple, the test identifies which nutrients are needed to ensure the soil is balanced and there are no limiting factors to production. For example, if one nutrient is in excess, this may lock up the availability of another nutrient,” says Mr McEwen of Arnprior Farm, Stirlingshire.

In the problem field, the standard soil test identified high levels of magnesium at index 4 (index 2 is considered normal), but the Albrecht test showed the opposite result – a 124kg/ha deficit.

“We added a magnesium spray and the crop greened up over the next two to three days.”

Cation exchange is a process that takes place in the soil to allow plant roots to absorb many nutrients required for growth (calcium, magnesium, potassium, sodium and trace elements).

The total exchange capacity (TEC) reveals the soils potential to hold and exchange these nutrients.

Soil TEC can vary from 3% to over 40% in the space of a few fields, says Mr Franklin. It is this variation that can lead to inaccurate test results and unbalanced soil, as most standard UK soil test guideline levels are based on every soil having the same nutrient holding capacity of 15% TEC.

Dr Albrecht, the researcher who the test is named after, believed soil needed to be balanced in every element, not just N, P and K. The optimum soil has 68% calcium, 12% magnesium, 4% potassium and 1% sodium, says Mr McEwen.

“There are 16 known trace elements that affect plant growth and nitrogen is the driver of the system. But if the trace elements aren’t concentrated on and balanced, you won’t get efficiency and you have to put more nitrogen on to compensate for this, further pushing things out of balance,” he adds.

After the success of the poorly yielding field, the 323ha Forth monitor farm ran a trial treating half of one 5.6ha field with a standard NPK programme and the other according to the Albrecht soil sample results. Sixty finishing lambs were introduced into each half for 40 days and were weighed on entry and exit.

Lamb daily liveweight gains were also 15% higher on the Albrecht half. This is due to the higher quality of the swards. Crude protein was 274g/kg, D value was 73% and sugars were 114g/kg. This compared with the standard half analysis of 226g/kg crude protein, 68% D value and 79g/kg of sugars.

Metabolisable energy also increased by 0.8MJ/kg, to 11.5MJ in comparison to the standard half of the field.

“A far higher proportion of the lambs were actually fat and ready to sell after the trial,” adds Mr McEwen.

The improvement in grass quality was clearly highlighted by the difference in liveweight gain between the two batches over the trial period. The Albrecht half averaged 0.8kg heavier, equating to £1.39 a lamb at a selling price of £1.74/kg.

Although there was a 25% reduction in nitrogen use on the Albrecht half, the targeted use of fertiliser and trace elements on the trial plot was £8/ha more expensive than the standard NPK treatment.

However, the uplift in lamb value grazed on the Albrecht side was still £54/ha more than the standard side, even taking into account the additional cost of soil rebalancing.

So while the alternative soil treatment hasn’t saved any money at the moment, Mr McEwen believes the more precise use of products to balance out soil nutrients will enable him to reduce nitrogen fertiliser costs further in future.

Following the successful trial, Mr McEwen has now Albrecht tested half the farm and is about to have the other half tested. However, the test is considerably more expensive than the standard soil test.

“It costs £15-£20 per standard sample and £80-£90 for the Albrecht sample, which should be carried out every four years, but you get the benefits so it’s worth it,” says Mr McEwen.

Mapping out all the fields is also clearly highlighting those used for hay or silage have very low potash levels.

“Historically there was P and K in the soil, but this won’t last forever. It’s like a bank account, you can’t keep withdrawing funds,” he says.

“Now we’re trying to put back what P and K we take off, plus a bit more by spreading dung on the hay and silage fields in late winter to early spring,” he adds.

“At least if you test, you understand what limiting factors there are. We never considered magnesium to be the limiting factor and were lucky it could be easily fixed.

“The aim of the game is to provide more nutritious food for humans. If we can maintain grazing quality and growth rates throughout the season, we can finish as much as possible off grass alone,” says Mr McEwen.

He also believes if the plant is healthier, the animals immune system will be stronger leading to lower disease levels and reducing pesticide and vet med use.