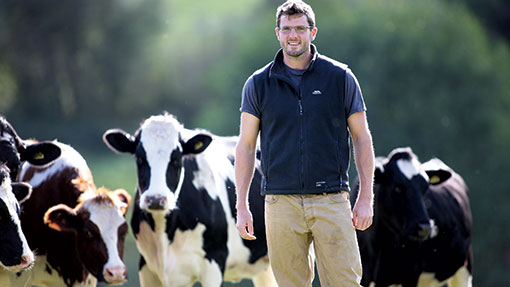 Having a protocol in place for monitoring freshly calved cows has helped improve transition health at one Monmouthshire dairy farm.

Making sure freshly calved cows get off to the best start possible has helped improve yields and cow health at Lower Buckholt Farm, Monmouth.

Since securing a 10-year farm business tenancy four years ago, brothers Oli and Ed Partridge’s focus has been on driving the family dairy business forward.

The herd of pedigree Holsteins has expanded from 100 to 270 and the ambition is to further increase numbers to 350.

A switch to three-times-a-day milking and a more precise approach to farm management have seen yields climb from 7,000 litres to almost 10,000 litres sold a cow a year.

This has led to a renewed focus on the management of freshly calved cows. “To ask a cow to give more than 40 litres a day you have to give her a good start,” explains Oli Partridge.

Implementing a strict regime for monitoring freshly calved cows has been crucial in maintaining good cow health, while pushing yields.

Mr Partridge says the management of freshly calved cows turned a corner last year when protocols switched from being reactive to proactive.

“It has been nearly 12 months now [since we started doing fresh cow checks] and we have seriously upped our game,” he explains.

“We have stepped up the way in which we monitor and record information, which gives us more of a heads up if problems are coming,” he explains.

Employing an additional worker to milk has freed up “invaluable” time for weekly fresh cow checks.

Fresh cows are kept in a small group of about 14 cows for roughly three weeks, at which point Mr Partridge says he has to be satisfied with the health and feed intake of individual animals before they join the main herd.

A blood ketone test is completed five days post-calving to monitor the level of beta-hydroxybutrate (BHB) in the blood, which can be an indication the cow is suffering from ketosis.

Mr Partridge’s consultant, Richard Cooper from Evidence Based Veterinary Consultancy (EBVC), says signs of subclinical ketosis are essentially impossible to spot, so a blood test is an accurate way of diagnosing the disease.

“You can also look for ketones in milk, but a blood test gives a more precise reading.

“An acceptable reading is 1mml/litre or less. Between 1-1.4mml/litre is a sign that cow has a borderline problem. Above 1.4mml/litre is sub-clinical ketosis and that will be putting cows at risk from poor fertility, poor milk production and other diseases,” explains Mr Cooper.

“If the reading shows it is above 1.4mml/litre, it is subclinical, at which point I will intervene and treat with 250ml of propylene glycol for three days,” says Mr Partridge.

Routine checks are completed every Monday and Friday, during which every cow is given a ketone test, their temperature is taken and a vaginal check is completed.

A cow’s normal temperature is 39.5C – anything above this could indicate infection.

“Temperature checks can help identify early signs of infection present after calving, such as metritis, and we can investigate further by doing a clinical and vaginal examination,” says Mr Cooper.

Mr Partridge says one of the most important aspects of his fresh cow management is ensuring cows are eating enough, so rumen fill and appetite assessments are key areas of examination during routine checks.

“Putting a hand on the left flank of the cow and pushing against it will tell you how full she is,” says Mr Cooper.

He adds: “The rumen should feel firm and defined, but it is the fullness that’s important.”

Mr Partridge says putting a hand on cows rather than relying on visual assessments alone has helped him pick up on cows that have not been eating properly.

“I also make sure they are eating their cake in the parlour. If they’re not it’s an indication something isn’t quite right and it could be linked to a displaced abomasum.”

In this instance, Mr Partridge investigates using a stethoscope to listen for a “ping” sound, which is a sign the stomach has twisted.

At 21 days after calving, cows are presented to the vet for routine post-natal checks. But Mr Partridge says close monitoring of fresh cows beforehand allows him to spot problems earlier and as a result fewer cows need aggressive treatments, including antibiotics.

“It gives me the ability to treat early so problems don’t spiral out of control. If we have a case of subclinical ketosis I can deal with it before it becomes clinical,” he explains.

Information is recorded on a whiteboard in the farm office and a traffic-light system is used to flag up any problem cows, so anyone involved with cow management on the farm can come in and get a quick overview.

Mr Cooper says: “It is all about engaging staff and giving quick and easy interpretations of how things are going.

“If I walk in and see a lot of red pen I instantly know there’s a problem. You would expect the odd animal to be ill, but if there are a lot of sick cows it can suggest there’s an underlying problem with the way we are feeding those cows or managing them that’s putting them at undue risk.

“It is a prompt to look at what might be going on. Is it that the silage has changed and the cows are getting subclinical milk fever, for example?” says Mr Cooper.

“Most of the problems we see early after calving will be related to how well we manage cows during the dry period,” explains Mr Cooper.

During the winter, far-off dry cows receive a maintenance ration of haylage, while in the summer they mop up grazing paddocks after the low yielders, which prevents them from putting on too much condition.

This helps prevent milk fever at calving, which occurs when cows are unable to draw on sufficient calcium reserves from their bones and diet, and calcium in the blood suddenly falls.

Transition cows are housed in straw-bedded pens next to the fresh calvers, with the aim of reducing social stress.

“It is not a change of scenery. They literally move a few metres. I try to avoid big changes to avoid stress at calving as much as possible,” explains Mr Partridge.

Taking a holistic approach to cow management year round means cows are better able to cope with the demands of calving.

“Mobility is important for the cows to be able to get up and eat,” Mr Partridge says.

Therefore cows are routinely foot-trimmed twice a year. First at 100 days in milk, followed by a second trim at drying off. All cows also get mobility scored once a month and any scoring 1 or 2 get their feet lifted, explains Mr Partridge.

“Having the extra time to do scoring and fresh cow checks is definitely time well spent.

“The cows go into the foot-bath every milking, which has almost eradicated digital dermatitis.

Close monitoring of fresh calvers has been valuable in dealing with the legacy of problems caused by the wet weather in 2012.

“We fed a lot of maize last winter to make up for poor-quality grass silage and we had a lot of overfat cows,” Mr Partridge says.

As a result antibiotics use and vet costs have fallen considerably, from £3,500/month to £1,500/month.

Records also show that since October 2012, retained cleansings have reduced from 18% to 12% of cows calving, and half of these cows had milk fever.

“Our aim is to have fewer than 8% of animals calving each month with retained cleansings, and fewer than 5% with milk fever,” adds Mr Partridge, who says having clear KPIs gives them clear targets to focus on.