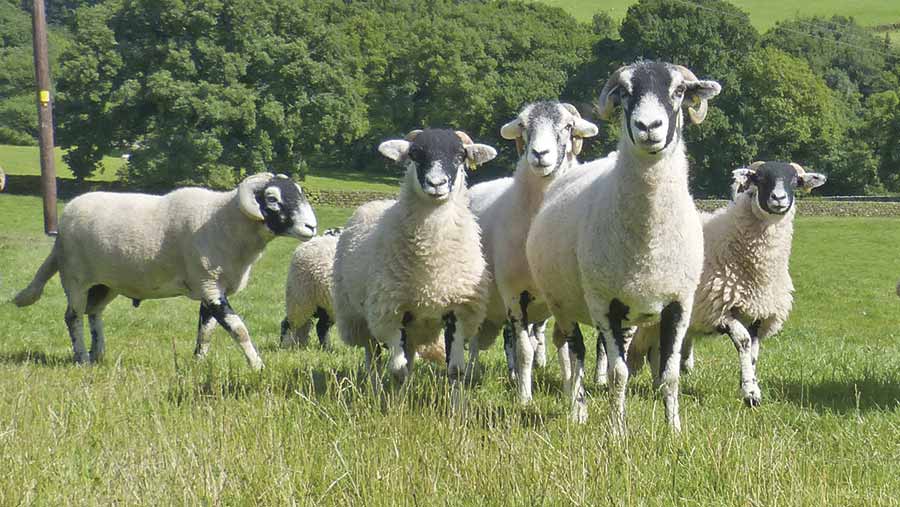 A three-year performance-recording project across four nucleus flocks in North Yorkshire has set out with the bold aim of improving carcass quality in the Swaledale breed.

Results from the first crop of lambs are still being compiled by the AHDB’s Signet Breeding Services, as part of an initiative to improve carcass grading and reduce days to slaughter.

The project covers 800 ewes across the farms of Barry Wheldon and Tim Dunn (Helmsley) and Mark Graham and Andy Fawbert (Goathland), with 1,500 ewes expected to be performance recorded in the final year.

Breeders are aiming to lift carcass grade from an O to an R-grade and improve store weights, while hoping to improve conformation in cross-bred sheep.

The performance recording is a key part of the project which is looking into upland sheep farming viability. In coming years different lamb finishing systems will be compared to assess which methods bring the best margins.

“Roughly speaking about 60-70% of carcasses across the four farms are O-grade on the Europ grid,” explains Mr Dunkley.

“We don’t expect to see huge gains after the three-year project but, longer term, if we can get to a situation where the split between Os and Rs is 50:50 rather than 75% or more Os then that will be a useful gain.

“Ultimately, we want to get the lambs away sooner, ensuring we have better-grown lambs in the autumn that can then reduce finishing times,” says Mr Dunkley.

“We are also looking to reduce the number of small lambs that have historically been finished over three to four months with concentrates; the margins of which are questionable and rely on a rising market in the new year.”

“However, we may find on some systems that store lambs are the best approach. But even if we can produce 32kg stores in November rather than 26kg stores that will be of great benefit.”

How it is working in practice

Sheep scanner and Swaledale breeder Tim Dunn, of Breck House, Bransdale, is one of the breeders hoping to benefit from the initiative.

“I travel around and see a lot of farms doing my sheep scanning work and over the past six to eight years I have seen plenty of farms experimenting with other breeds and looking for possible alternatives to the mule.”

He hopes that performance recording his flock will help him adapt to the harsh climate upland sheep farms are facing post Brexit.

“I see performance recording as part of many ways we can adapt to keep sheep on the moors and hill farms viable. It would be a shame to lose the hefts in our area, they are living ancient monuments.”

He also hopes performance recording will help create a bigger demand for the tups he sells at Ruswarp and Hawes each year.

“In the future, I hope there will be a market for performance-recorded tups. Most people are keen on conformation in tups now and it would be interesting to see if that leads to people buying tups on figures.

“I would hope that a pass-on benefit of this would be to keep condition on the mule better.”

Lambs are single-sire mated in small fields and, this season, Mr Dunn has used more than 17 different tups with progeny weights recorded at birth, at eight weeks and 21 weeks and back fat scanning also conducted. However, the task hasn’t been as time-consuming as originally expected.

“I’ve learned that the Signet system is flexible and can work within a hill farming system. Signet has allowed us to class lambs as small, medium and large rather than weighing absolutely everything.

“The data-recording points coincide with the daily lambing round, shearing and weaning respectively, so it fits in with our workload and it’s not been as much hassle as I expected.”

Recorded sheep were chosen on hefts that were easier to record.

“We chose one heft of 100 sheep on Laskill Pasture that were tupped by four sires. This is helpful for gathering as it is one separate piece of land but for that reason, it will be hard for me to expand my nucleus flock there.

“I could look to record on other parts of the farm and may end up recording all my hill sheep eventually.”

Mr Dunn has already been able to pinpoint a tup that’s breeding lambs that grow faster.

Although he says he will probably need two generations of sheep over 10 years to see a significant difference in the sheep, he believes the three-year project is a great starting point.

“Most Swaledale breeders have been single sire mating and recording parentage for decades so they could switch to performance recording relatively easily.”

“Turning O-grade lambs into Rs at 10p/kg amounts to a £1.70-£1.90 a head with most carcasses being 17kg,” says Mr Wheldon, who hopes to have slightly bigger lambs without affecting lambing ease.

“This is a small gain but if I can achieve a better carcass in less time with less bought-in feed then this is helping farm profitability.”

Mr Wheldon has noticed the next generation of sheep breeders going down the performance-recording route and is considering buying his second Aberfield sire.

“Some breeds are getting way ahead of us in their methods. I’ve used an Aberfield for crossing this year and I am thinking of getting another.

“But we are fortunate with the Swaledale in that we are starting with an easy-lambing ewe. I might have to lamb 1% of them at lambing and I don’t want to lose that.”

By weighing lambs three times through the year, Mr Wheldon believes he has identified a period in late summer when lamb growth rates plummet. He thinks one tup gives 40g/day more on his progeny around shearing time.

“It’s too early to draw firm conclusions from the recording I’ve done, but I think there may be a case to wean lambs earlier,” says Mr Wheldon, who mated pure for three weeks before using Charolais chasers.

“One thing I’ve noticed from performance recording is a big drop in daily liveweight gain between the eight-week weight and weaning.

“Better lambs can grow at 270-280g a head a day on heather moor, but this then halves to as low as 100g/day. Growth rates depend massively on the ground they are on and whether it’s a twin or a single, but late summer growth rates tend to drop to 120g-150g/day.”

His nucleus flock is made up of the younger sheep to allow him to focus on the younger genetics.

“I started with shearlings and then one-crop ewes and will work my way up to all my 450 Swaledales in the last year of the project.

“I’ve chosen to record on a piece of moor which is easily gathered. They don’t stray far because they are contained by three neighbouring hefts.”