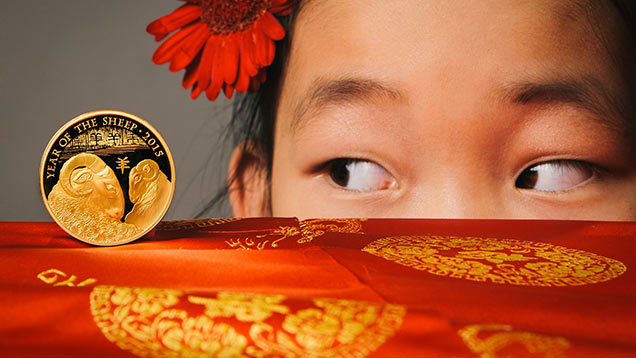 A pair of Swaledale sheep feature on a coin marking the 2015 Lunar Year of the Sheep.

Two Swaledales are pictured with their heads bowed towards each other, while the Chinese character for sheep – a pictograph of the head and horns of the animal – completes the design.

The British sheep breed was chosen because of the appearance of their smooth curled horns and the swirls of their wool coats, a contrast in textures that translates well into the intricate detailing of the coin’s design.

British Chinese artist and printmaker Wuon-Gean Ho designed the 1oz silver coin for The Royal Mint, as part of celebrations for the Chinese New Year.

“I recall observing sheep as part of the British landscape – in the grounds of Blenheim palace, on the hillsides of the Peak District and in the rolling Brecon Beacons,” said Ms Ho, who trained as a vet in the UK before becoming a printmaker.

“My memories of the lambing season and the close bond created between mother and child was particularly helpful in capturing the passion for company symbolised by the Year of the Sheep.”

The Swaledale sheep breed was developed in Yorkshire after the First World War. Farmers wanted a breed able to withstand the hardships of the British climate.

Herds can now be found across Britain in exposed or mountainous regions, but are mostly concentrated in Yorkshire, County Durham, the Lake District and the Cumbrian Fells.

The Royal Mint’s lunar coin series reflects the Shēngxiào tradition, linking each year to one of 12 animals and their traits, which are attributed to those born in a given lunar year.

The commemorative £2 coins, which are legal tender and start from £82.50, are the second in The Royal Mint’s Shēngxiào lunar coin collection.

Just 495 of the coins have been minted and they are available to order from www.royalmint.com.