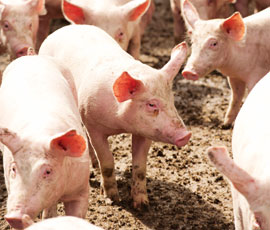 Swine dysentery remains a real threat on UK pig farms, so what can producers do to get on top of the problem?  Debbie James  finds out.

Swine dysentery can decimate pig productivity, but despite efforts to encourage farmers to report cases, the true extent of the disease on UK units is feared to be much greater than the level of reported outbreaks.

The disease, which can result in a £10 loss on a finished pig, is spread easily. And although many producers have agreed to report outbreaks to BPEX through its Swine Dysentery Producer Charter, others have not signed up.

Zoe Barker, BPEX regional health co-ordinator for the South, says: “It is difficult to understand the scale of the problem because there are no official surveillance figures. We have no way of knowing how many producers have a problem and, if they have, whether they are keeping it under control or not.”

“Farms can have 20 or 30 infected pigs and the disease can cycle around the farm for a very long time. If the situation is hidden, no-one knows where these cases are and this makes it difficult to control.”

Swine dysentery causes severe inflammation of a pig’s large intestine. The first signs are diarrhoea that leaves a stain on the skin under the anus. Tail twitching and hollow flanks resulting from poor growth are other common indicators.

Pigs will also suffer a partial loss of appetite and have a slight reddening of the skin. And as the disease progresses, the pig rapidly loses condition and has a gaunt appearance, with sunken eyes.

The disease is spread quickly when carrier pigs shed the organism in faeces, and infection occurs when a pig eats the contaminated faecal material.

It is most likely to enter a farm in carrier pigs or in infected faeces picked up on equipment, tyres, footwear, birds and rodents. And poor sanitation and overcrowding will intensify the disease.

Ms Barker says the disease is one of the most economically damaging to the pig industry, costing more than £10 a finished pig when you take into account medication, mortality and pigs that cannot be marketed.

Depopulation or long-term medication are the only options for completely ridding a farm of the disease.

And depopulation was the course of action taken by a Yorkshire farm that suffered a serious swine dysentery breakdown last November. The farmer had signed the Swine Dysentery Producer Charter and, according to Ms Barker, there is no doubt that the farmer’s action in reporting the outbreak curtailed the spread of the disease.

“It just took one farmer to stand up and admit he had cases of swine dysentery to bring the problem to the forefront,” she says.

The BPEX charter gives producers access to a control centre that tracks the disease, assists in recovery when breakdowns take place, and records when units become free from the disease.

Angela Kirkwood, who runs a breeder finishing unit in East Yorkshire, signed up to the charter on the advice of her vet. She now receives text messages and emails advising her of outbreaks and the course of action being taken.

She admits it gives her peace of mind: “There are a lot of finishing units around us, so there are pigs coming into the area from all over the country that could potentially be carriers.”

The charter also gives useful information when Mrs Kirkwood needs to transport pigs. “We can put in a postcode search and it will flag up units around us and whether or not they have the disease. When we are planning routes and movements we can take this into account,” she says.

It was information sharing that appealed to Stuart Bosworth when he joined the charter. “It was important to me to know where infected herds were,” he says.

Mr Bosworth runs a closed herd of 270 sows in Essex. He believes the charter has got farmers thinking about the disease and what they must do to keep it off their farms. “Producers have come to realise that it is no good acting in isolation to combat disease, we have to work together,” he says.

• Do not visit other pig farms

• Don’t share staff, tools or equipment with other farms

• Do not spread pig waste

• Clean and disinfect vehicles and equipment taken off the unit

• Keep visitors to an absolute minimum

After further cases of dysentery were identified in the North Yorkshire region, BPEX is hosting a meeting on the subject to raise awareness.

The event will be held on 20 March at The Crown Hotel in Boroughbridge, North Yorkshire, YO51 9LB at 7pm.

Those wishing to attend or request a factsheet should email pighealth@bpex.ahdb.org.uk or phone 0247 647 8877.