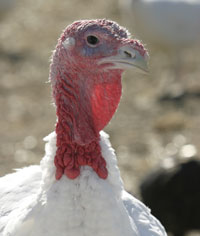 Swine flu has been detected in turkeys at two farms in Chile, the first time the H1N1 virus has been found outside humans and pigs.

The country’s farming leaders said the outbreak had been controlled on the farms, 75 miles from the capital Santiago and that both farms had been placed under quarantine.

The virus was detected last week (13 August) after turkey producers reported anomalies in the output of eggs.

Chilean authorities urged people not to be put off from eating turkey meat.

“We call on the public to consume turkey products with confidence,” a statement from the country’s farming and livestock agency said.

Laboratory results ruled out the presence of H5N1 or bird flu virus, it added.

It is not known how the animals were infected.

It is the first time the disease has been found in animals other than pigs.