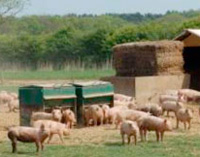 The prevalence and economic impact of swine influenza in the UK is underestimated, with the disease estimated to cost €28 a sow a year, according to Merial’s Ricardo Neto.

Speaking at the launch of Gripovac 3, the first swine influenza vaccine in the UK, Mr Neto explained how he thought the prevalence in the UK was higher than many may expect. “Although at the present time it is difficult to estimate the true prevalence, with the number of confirmed cases small, this is likely due to under-reporting.”

Symptoms of swine influenza include raised temperatures and respiratory disorders with abortion also a key feature in sows and medium-term fertility problems in boars. “Swine influenza affects productivity and welfare and has been shown to extend slaughter time by up to seven days, making it a severe economic problem,” he said.

In Europe economic losses have been estimated at E28 a sow a year and when costed on one farm in the UK where farrowing rates were reduced by 10% as a result of swine influenza it cost about 20p/kg deadweight. “This is why it is cost-effective to vaccinate,” he said.

Vaccination for sows consists of two 2ml injections at a three-week interval for primary vaccination and a booster at each gestation of subsequent lactation. When the booster is given two weeks prior to farrowing, piglets will be protected via colostral immunity.

“Gripovac 3 has demonstrated broad cross-protection against influenza strains present in Europe and can be used at all stages of production of sows and gilts, as well as the feeding herd. In addition, by vaccinating you are cutting out the need to use antibiotics to treat swine influenza,” said Mr Neto.


All the news from Pig and Poultry