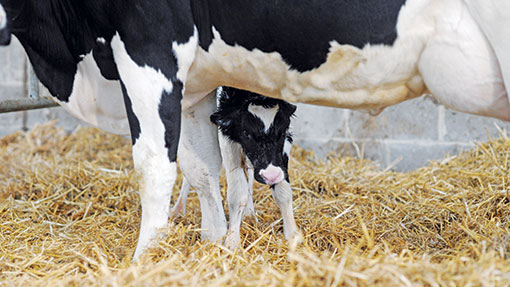 It is the most common and costly viral disease of cattle in Europe. According to studies from Reading University it costs UK farmers £39.6m/year.

In the UK it is estimated that 87-95% of herds have been exposed to BVD virus.

“Until we are BVD free as a whole country, uninfected herds are still at risk [from contracting the disease from infected herds],” says Dr Berry.

She says BVD remains a huge problem in parts of the UK because the disease is “hidden” and often goes undetected.

“It is a virulent and infectious disease and often you don’t know if you are buying a persistently infected [PI] animal. Some PI animals can look perfectly normal and people can sell them in good faith – they may genuinely not know they have BVD.”

BVD can have long-lasting performance implications on infected animals, and because it causes immune suppression it makes them more susceptible to other illnesses such as pneumonia.

“In a herd with BVD infection you can probably have 2-3% of those animals that won’t hold to first service and another 2-3% that will abort.

“Also, if a beef cow suffers from an abortion, you have got nine months where that cow doesn’t give you any income.”

As a result she says the disease can be very costly and will vary massively from farm to farm depending on the severity of the outbreak.

Recognise the signs of BVD

These symptoms are all associated with BVD infection. If they are familiar on your farm talk to your vet about screening for BVD infection:

Dr Berry says that known BVD-free herds often have a better health status and in most instances benefit from tightened biosecurity measures.

“It helps control other diseases. There looks to be evidence that herds with BVD can be more susceptible to TB. They tend to excrete more TB virus.”

Dr Berry believes that unless British farmers take immediate action to eradicate the disease there is a real risk of being left behind.

Sweden and Norway pursued effective, government-led eradication programmes in the late 1990s and as a result are now BVD free, she explains.

“Scotland and Ireland are already ahead of the game. When that happens you get a disparity in trading.”

Since the introduction of a compulsory national BVD eradication programme in Scotland in 2010 disease exposure has been reduced from 40% to 18%.

Farm vet Den Leonard from Lambert, Leonard and May practice in Broughall, Shropshire, agrees trading could become an issue.

“Most of Europe is heading towards BVD freedom so where we are twiddling our thumbs we will end up out in the cold when it comes to trading and our products will be sought after less than in Ireland and Scotland,” he says.

“BVD is one of the cheapest diseases to test for and vaccinate against and yet it is one of the most costly diseases on farm. It doesn’t make sense to live with BVD. The cost benefits of getting rid of it are massive,” adds Mr Leonard.

Animal Health Ireland estimates the financial gain equates to €10 for every €1 spent on eradicating BVD.

Mr Leonard believes the only way of beating BVD is by getting the industry to work together.

“We need a coherent representative body to take a lead on disease control,” he says.

But until that happens Mr Leonard says farmers cannot afford to wait for the governments in Wales and England to act.

In essence, healthy cattle will make for healthier profits – and at a time when UK beef and dairy farmers face increasing pressure on margins, no one should underestimate the benefits of introducing an eradication programme.

So, over the next two months, Farmers Weekly will be publishing a series of articles offering practical advice on how to detect, monitor and reduce BVD prevalence within your herd through farmer success stories and expert advice.

Compulsory testing may be required from this year following a pledge from NI agriculture minister Michelle O’Neill.

On the 1 January 2013, following on from a 12-month voluntary period, Ireland’s national BVD eradication was made compulsory. The legislation stipulates that:

The Animal Health and Welfare Strategy Steering Group in Wales identified BVD as a priority last year. Its purpose is to consider how the industry can address BVD in Wales and it is due to present its recommendations to the Welsh government this year.

Farming Connect is subsiding BVD testing on farms as part of a workshop between farms and local vet practices.

A national, industry-led eradication scheme was launched in 2010. Since then, more than 90% of Scottish herds have complied with mandatory screening.

The next stage of the programme will see herd status made compulsory and movement restrictions placed on infected cattle. Farms that fail to test will also face restrictions.

By the end of 2014, farmers will be required to test animals brought into the country for breeding.

There are three regional initiatives in place: