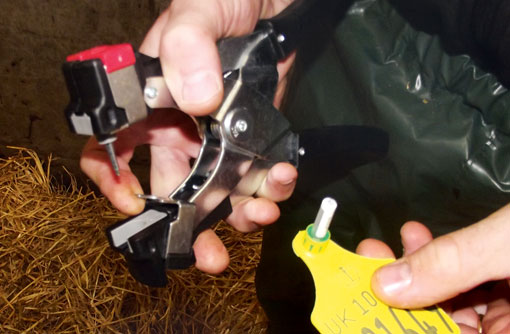 Tag and testing calves for BVD could be a massive step forward in the control of the disease, as Sarah Trickett finds out

Vaccines and tools to control BVD have been around for years in the UK, yet the industry is no further forward in controlling the disease that is costing up to £40-50m annually.

Part of the problem with BVD control is the lack of disease-specific symptoms, with as many as 80% of herds thought to contain the disease – a sure sign that many don’t know it’s there.

The other issue is there is no simple route to eradicating it. A shot of vaccine may help along the way, but it certainly will not stamp it out or stop the spread.

But with Scotland now in the process of rolling out an eradication scheme, many producers are going to have to think about individual farm BVD status, not only to secure trade north of the border, but also to maintain efficient animals at a time when margins are being squeezed.

And two farmers thinking about the trade implications and going out of their way to make sure BVD is not an issue in their herds are dairy farmer Tony Smith and suckler producer David Neve, both farming near the Scottish borders in Cumbria.

Tag and testing in the dairy herd

Mr Smith, who milks 190 cows in Cumrew, north Cumbria, says although BVD is not a big problem on his farm, tag and testing calves is being used as a way of monitoring the herd.

“The main advantage of me monitoring BVD is to say with confidence that my breeding heifers and stores are clear, which, being in the north of England opens up a significant market in Scotland. We are also not running an efficient herd if we have got a sick animal. We can not afford to carry a BVD cow or calf in a dairy herd,” he says.

Ear tags used in tag and test look like a normal tag and are applied in the usual way, but when the tag is applied, an ear tissue sample is collected in a barcoded vial attached to the tag applicator. This vial can then be sent for testing.

Mr Smith routinely tests for BVD through bulk milk screening and also vaccinates all of the cows. He sees the tag and test method as a way of “finishing the job off” and as an insurance policy.

“We do vaccinate, which keeps the disease nailed down, but the tag and test method will allow us to pick up any persistently infected (PI) calves, if there are any, and get rid of any PIs before they have a chance to spread infection.”

And at a price of about £5.99 quoted by manufacturer Fearing for a ministry-approved pair of tags which includes the test, it is cheaper than a blood test.

Mr Smith sells both stores and breeding stock, and the tag and test system means all calves tag and tested clear can then be sold certified as BVD free.

The other advantage to the tag and test is the speed with which farmers find out the results, compared with other testing methods, says vet Colin Lindsay of Capontree Vets, Brampton.

“Although now it is possible to blood sample a calf as early as six-weeks-of-age to check if it is a PI, this is a new development. Prior to this you could only blood sample for antibodies, and had to wait until the calf was nine-months-old, by which point a confirmed PI could have infected other animals.

“But the advantage of the tag and test method, which also screens for actual virus, is that calves are tagged and tested straight away, so you don’t need a vet call-out at six weeks. Plus the cost of tag and testing is similar to, if not cheaper than, a blood test, and you are going to tag the calf anyway,” he says.

Mr Lindsay says should the test come back positive, those PI animals should then be removed from the herd, so preventing the risk of transmission to other animals and removing the costs of rearing an infected animal.

Tag and testing in the beef herd

Beef farmer Mr Neve, who farms 50 to 60 Limousin cross cattle with his father John at Tindale Fell, had a problem with BVD several years ago, despite vaccinating after bringing two PI animals into the herd.

The issue raised its head when difficult calvings were observed, with a blood test indicating BVD as the cause.

Mr Neve then began a strict programme of blood sampling the whole herd, which was a major financial investment in terms of screening and also removing carriers from the herd.

From then on he blood tested a crop of calves at nine-months-old, but as Mr Neve says, he was “always chasing his tail”.

“Because we couldn’t blood test to find whether a calf was a PI until nine-months-old, we were always nine months behind, so were always chasing our tail. But had we had had the tag and test system back then, we would have been able to pick up PIs straight off.”

Mr Neve describes the tag and test system as “revolutionary”. “Tag and test will be a massive step forward for suckler producers and folk selling breeding animals. It is definitely a step in the right direction to controlling the disease,” he says.

Mr Neve used to have a tight calving pattern, calving batches over 12 weeks with most giving birth in the first six weeks. Now the calving pattern is extended over the whole 12 weeks.

And although he is now clear of BVD, he is continuing to screen calves using the tag and test system.

“Because we are buying-in cows with calf at foot, we now blood test heifers and will use one of the tags in the calf. We have also stepped up quarantine until we get the results of the test.”

Mr Lindsay says the advantage of beef producers using the tag and test method is the importance of knowing you have a PI calf.

“Because beef calves are running with cows that are being served, if you have to wait until six-weeks-of-age for a blood test, the damage may already have been done.

Also, the last thing any farmer wants to do is start handling cows with young calves at foot. So putting a tag in quickly at birth is a lot easier and safer way of testing,” he says.

Mr Lindsay started working with farmers in his area to eradicate BVD 20 years ago. “What’s been an eye opener for me is the lifespan of a PI and how much havoc they can cause, even in vaccinated herds. It’s important producers realise you can’t pick up PIs just by looking at them, you need to test.”

BVD – what you need to know

1. What is a persistently infected animal?

The BVD virus is maintained in the herd by PI calves that are infected in the uterus between days 42 and 125, before the foetus has a competent immune system. A PI animal will always give birth to a PI calf.

Animals that contract BVD after birth are not PI and will never become a PI. They can test virus negative, but antibody positive.

This animal is what is called transiently infected, which is like the human equivalent of the common cold.

They have contracted the disease, but will usually recover in about four weeks. It’s only when cows become infected during pregnancy that the disease can be passed on to the calf to produce a PI.

2. Why are PI calves an issue?

PI animals are a major source of BVD infection as they are born with the virus and can shed huge quantities of disease.

3. Can you tell if an animal is infected with BVD?

No. Symptoms, if present, can be quite generic. So calves will often not thrive, will be more susceptible to respiratory diseases and may take longer to reach target weights.

Cows many also see reduced milk yield and have fertility issues and be more susceptible to diseases such as salmonella, pneumonia and Johne’s.

4. Will vaccination eradicate BVD on my farm?

It can help in the fight against BVD, but it will not eradicate it. Vaccination does not deal with PI animals. They are too highly infectious and will still be able to spread infection.

5. Can BVD be spread by wild animals?

Sheep can carry BVD and can re-infect your herd, but only if they have been in contact with BVD cattle in the first place. There is little evidence to suggest wild animals pose a problem.

6. How long will it take me to eradicate BVD?

The majority of farmers following the CHeCS scheme have eradicated BVD in under two years. Test to find your PI cattle, slaughter them, buy-in only BVD-free cattle or isolate bought-in cattle and test.

7. If a test comes back positive does that definitely mean that animal is a PI?

No test is absolutely 100%, however, tag and test is very accurate. Advice from the SAC is that any test coming back positive should be retested to make sure it is definitely the case.