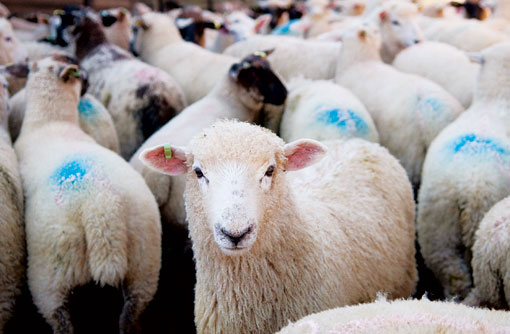 Lameness is an underlying problem on most sheep farms. While it may go undetected, producers failing to address the issue and take appropriate steps to minimise its spread are never likely to get on top of it.

What is more, according to independent vet consultant Paul Rodgers, unless producers have a good quarantine procedure in place and pay attention to hygiene at areas of gathering and handling, the problem is guaranteed to spread.

For one West Country sheep producer, putting infrastructure in place around water troughs and salt licks has helped to reduce foot-rot and scald to a manageable level.

Five years ago, Michael Trevelyan, who keeps 74 Suffolk x Mule ewes at Wranglea Farm in Wellington, Somerset, was facing a serious lameness problem in his flock, with scald quite badly affecting lambs.

But following an EBLEX meeting into foot-care on his farm, changes were made to the farm set-up, and since then foot-rot and scald have been more or less eliminated.

“We are on quite heavy ground here and it’s rather wet. So what I have done is put down concrete pads, from pre-fabricated concrete flooring cut into slabs, in every field which is big enough to hold them,” says Mr Trevelyan.

“They are about eight inches high and I cover them in builders’ hydrated lime a couple of times a week. I have put them beside water troughs and in areas to hold salt licks.

“I think it’s far better than foot-bathing the sheep because they don’t like going through the foot-bath, but with the lime-covered concrete pads, the sheep like to jump up on them; they are treating themselves.”

He says by adopting this approach, the scald problem has been more or less eliminated. “If you eliminate scald, you eliminate the access route for the foot-rot.”

The use of a mobile handling system has been instrumental in reducing the incidence of lameness at FAI Farms’ Oxford site, where the five-point plan (see diagram) was originally launched.

According to farm manager David Crutchley, who manages the flock of 1,200 mainly Coopworth ewes, one of th 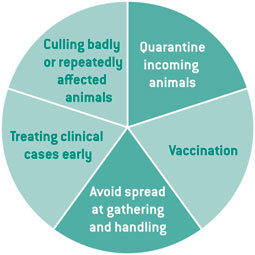 e key drivers in reducing lameness to 2% or less is working to avoid the spread of foot-rot at gathering and handling.

“Since adopting the five-point plan we have whittled lameness levels right down, and one of the key things we do is try and keep all sheep out of very wet areas – usually anywhere where we have mineral blocks or water troughs – and try to maintain them so the sheep are not walking on muck all the time,” he says.

To prevent sheep walking through the same areas all the time, all main standing areas are constantly moved around fields, and a mobile handling system is used to rotate areas where treatment is carried out.

Mr Crutchley says: “We can set it up anywhere on the farm so we are not always handling sheep in one area and increasing the risk of disease spread. As a result, we don’t have to keep bringing the sheep back to a central place to deal with problems.

“If you are treating animals for health problems and always bringing them back to the same place to do this, what chance do you have of preventing disease spread? With this mobile handling system, we have seriously reduced this risk.”

Each year, all sheep on the farm are vaccinated against foot-rot, and any lame sheep are treated, and have their feet examined to identify what has caused the lameness. Any repeat offenders are culled, adds Mr Crutchley.

The only way sheep producers can protect their flock against lameness from outside sources is to set up a strict quarantine procedure, says Mr Rodgers.

“If there is an underlying incidence of lameness in the flock, there will be a number of sheep that go untreated. And this is why it’s so important that you have quarantine protocols in place, because if you are not seeing the disease you don’t want to bring animals in that can trigger the disease,” he adds.

And although quarantine is crucial to preventing entry of lameness into a flock, he says it only works as part of a bigger control program. (See the Quarantine Tips box for advice on how to devise an effective quarantine routine for your flock).

To avoid the spread of lameness, which is carried on sheep’s feet in cases of contagious foot-rot, he says producers need to try to prevent trigger factors such as damp, muddy areas beside troughs and mineral licks, and warm, damp conditions in winter housing.

“For those who say it’s impossible to arrange an isolation area, I say to them that because they are unable to address the issue, they are not going to be the efficient farmers of the future,” he says.

“If you have lameness in your flock, it’s absolutely essential that you have good conditions underfoot. And you have to assess what the major risk factors are all the time. But first and foremost, anyone with lameness in their flock should take the time to diagnose the cause. There are a lot of iceberg diseases causing lameness and it isn’t always foot-rot.”