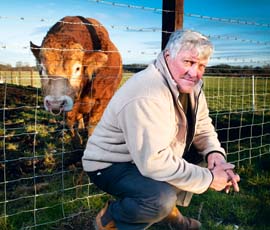 The owners of a prize-winning bull which tested positive for bovine tuberculosis have won a High Court battle to have a DEFRA slaughter notice on the animal quashed.

DEFRA ordered the bull, Hallmark Boxter, to be slaughtered after a TB-positive blood sample was taken last April.

Mr Jackson claimed it was, therefore, contaminated and wanted the sample retaken, offering to pay the costs.

But DEFRA refused and the issue ended up in the High Court in London, where Mr Justice McCombe quashed the slaughter notice, ruling that the test on Hallmark Boxter was flawed.

Mr Justice McCombe added that the case was “really about one animal” and the problem had been caused by DEFRA “making a policy mountain out of what was a farm molehill”.

He also refused DEFRA permission to appeal, although it could still apply to the Court of Appeal.

Julie Anderson, appearing for DEFRA, had argued that the bull posed a dangerous threat of spreading bovine TB and must be destroyed.

She submitted there was “no evidence whatsoever” that the positive blood sample had been contaminated.

A DEFRA spokesman added: “We are naturally disappointed by this judgment and will carefully consider its implications and our next steps, including whether to appeal.

“The judgment does not, however, undermine our comprehensive TB testing regime for cattle.”

What are your views on Boxter’s reprieve? Have your say on our forums.