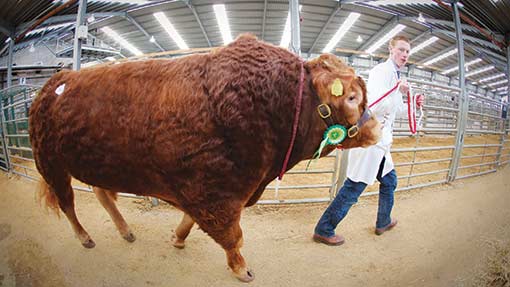 It’s not if but when online livestock auctions become a mainstream approach to selling in the UK. That’s the opinion of Somerset beef producer Ed Green after his experience of online selling on a Nuffield scholarship in the USA.

Livestock farmers may still have unhappy memories of online selling when it was introduced temporarily in the wake of the 2001 foot-and-mouth outbreak.

However, Mr Green feels there have been so many changes to the way livestock producers operate their businesses in the intervening years that the emergence of online selling in the UK is inevitable.

Keep up to date with all the latest livestock sale news

And he’s already in discussions with other interested parties with a view to taking the concept a stage further in the UK.

“But I don’t see it as something that will pose a threat to live selling and I don’t want farmers to be deprived of the option of selling stock through the ring.

“There is room for both if a complimentary system to live selling can be created,” says Mr Green, whose exploratory discussions are seeking to formulate an online selling “package” that would also be of interest to auctioneering firms.

“There is, however, an on-going generational change in thinking about the way livestock businesses are run. I am 41-years-old and don’t have the time my father had to spend a day at an auction mart buying cattle. Online marketing is something I would use and if it were available in the UK and I’m convinced there are many others who would so the same.”

During his Nuffield scholarship looking at the global beef chain, Mr Green says it was the volume of cattle traded through online auctions in North America that sparked his interest. He thinks about 60% of store cattle in North America and Canada are sold online.

His observations of online selling in North America highlighted two distinct systems: Live-bidding where lots come into the ring and an eBay style of selling, where buyers have a time-window in which to make a bid.

Live bidding involves a buyer opening up an app on a smartphone or connecting through a laptop to access the auction site. Images of the stock being sold are on screen; this is achieved by the auctioneers providing recent video-footage of each group of cattle being sold so bidders can also make a visual assessment.

An accurate description of the cattle is also provided. These descriptions point out any shortcomings of individual animals so that buyers are fully aware of what they are bidding for. 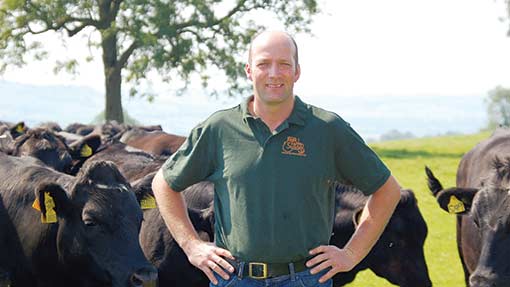 As a lot appears on screen – and the number of cattle a “lot” can vary depending on the size of the vendor’s holding – a 15-second clock controls the bidding. As a bid comes in the clock goes back to zero and then starts again until the 15-seconds runs out; when no more bids are made during a 15-second window it indicates that the previous bid secures the lot. Vendors can also impose a reserve price.

Because of the large distances involved Mr Green says an agreement is reached between the buyer and seller – via the auction company – about when the cattle have to be moved from the vendor’s holding.

Online selling can also follow an eBay-style format where cattle are advertised and potential buyers have a time-window in which to make a bid. Again, accurate description of the stock being offered is fundamental to this system of  selling.

Mr Green says the first concerns many people have are based on how sure they can be about the quality of the cattle they are buying and the risks of a vendor not being totally truthful. So in both types of online selling it’s essential vendors are honest about the stock they are offering for sale.

“Buyer and seller feedback is very important so there’s a lot to lose by selling cattle that are not as they are described.”

And Mr Green believes there are many reasons why it’s now an appropriate time to start considering online livestock selling in the UK.

“Minimising disease spread has to be one of the most important benefits of trading stock online as a means of avoiding mixed batches of cattle brought together in one place to be sold.

“If you have a major disease outbreak like foot-and-mouth there would be no interruption in trading if an online system was already established and stock could be moved from holding to holding under licence.

“I don’t see online selling ever replacing live selling, but I believe it can complement it. Everyone has a smartphone and technology is getting better all the time so online selling would seem to be an inevitable move forward.

“Using a smartphone can enable you to put together batches of cattle more quickly while still doing other things in the business. It’s saving time and money.” 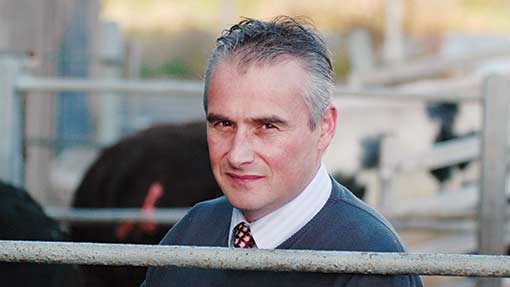 Chris Dodds believes the ring is still the best way to select stock.

However, the Livestock Auctioneers’ Association (LAA) are sceptical about such a system of selling livestock.

Chris Dodds of the association says we should not sacrifice systems that clearly add benefits and therefore value to our red meat sector just because change to online is seen to be “sexy” by a few.

“The only true way to select the animals best suited to your farming practices, or abattoir business, is by seeing them pre-sale and buying the animals that your individual business requires. This can only be done in the live auction sale ring,” says Mr Dodds.

“The system failed due to a lack of support from the buyers, who were only too pleased to move back to the live ring as soon as they re-opened,” adds Mr Dodds.

“There is little doubt that our live auction system has stood the test of time while other marketing systems have failed.

“Live auctions offer the buyer the opportunity to inspect, select and then buy the animals they want, rather than the animals that someone else has a marketplace for.”

Livestock auctions have stood the test of time – but some farmers suggest an online system could bring benefits.

Superior Auctions based in Texas sells one million head of cattle a year online. In January it held a sale offering 28,900 head of cattle including yearling steers and heifers, weaned calves, replacement heifers and cows with calves at foot.

Mitchell Lichtie, from the company’s internet division, says online trading is the way forward for all cattle producers. “It’s the way for farmers to take their business to the next level and to ensure sellers get top dollar for the stock they have to sell.

“It brings everyone together into one place via an internet platform and to be able to conduct an auction in real-time reaching millions of people across the USA who have an interest in trading in cattle.”

He’s convinced it benefits both buyers and sellers. “Sellers have more people in competition for their stock while buyers can bid for cattle sitting at home or anywhere they choose. They just log-on and it’s there.”

All money transactions are cleared by Superior Auctions. Buyers make the payment – via bank transfer, cheque or online.

Superior Auctions says if any less than 95% of a “unit” of cattle bought through the sale is not as described the buyer does not have to pay. The cattle are taken back. “There is a lot of buyer confidence involved. It’s what underpins the success of the system,” says Mr Lichtie.

Superior Auctions has 400 fieldsmen sourcing cattle for its online sales and all buyers undergo a thorough financial screening before being signed up as a buyer.

“Online auctions are regulated in the USA and they certainly provide the maximum exposure for stock being put on to the market. We’re bringing together the best buyers to compete for the best cattle through an auction system – it can’t be better than that for all concerned.”