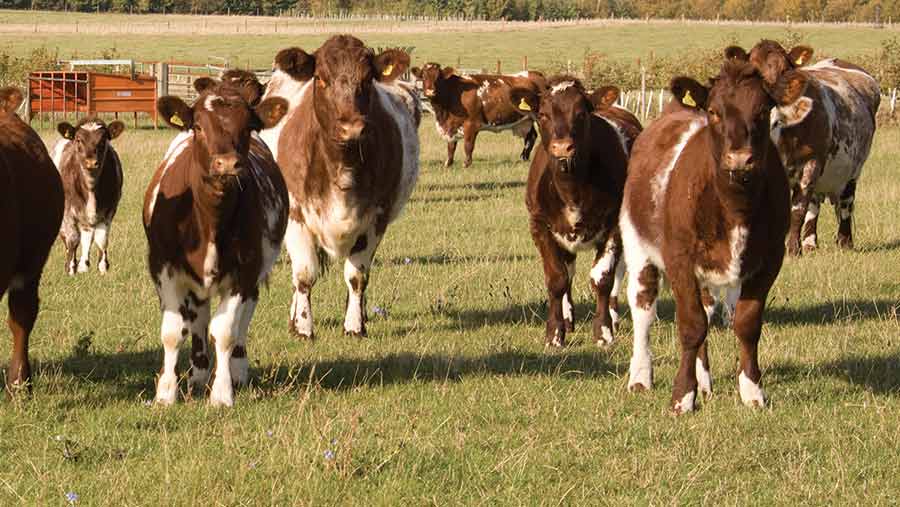 Striking a balance between producing cattle with sufficient muscularity, while still maintaining natural fleshing ability, is the challenge that underpins the breeding policy of a new Beef Shorthorn herd in Lancashire.

Tom Richardson, who is establishing the Catterall herd near Garstang, picked the Shorthorn due to its ability to finish off on grass.

However, they then took the decision to set up a pedigree herd of native-breed cattle to take advantage of the area’s ability to grow grass.

“We’re in the Fylde area of Lancashire, which is renowned for growing grass, so it made sense to select a breed that would exploit that,” says Mr Richardson, whose grandfather Ted, aged 91, is still actively involved in running the new herd.

“We were keen to use embryo transfer to speed up the breeding progress of the herd and we’ve used sexed semen – initially from the Canadian sire Shady Brook Power Play.

“Last year we bred 20 heifer calves and have since used sexed semen from Rothesay Eildon and Meonhill Fire Fox,” he says.

“But you’ve got to look to where your market is when you’re setting up a new venture like this. There’s an increasing demand for good-quality Beef Shorthorn females and that’s where we saw our main sales, but we’ve also sold young bulls as well as surplus embryos from our flushing programme.”

Initially, an arrangement with well-known breeder James Playfair-Hannay, of the Tofts Beef Shorthorn herd at Kelso, enabled a group of cows to be “loaned” for a flushing to provide the new herd with its foundation.

“There were some really good females among the cows we flushed and it’s from them that we’ve established some of our strongest female lines,” he says.

Females have also been bought from Geoff Riby’s Stonehill herd and more from the Tofts herd. The aim is to establish a herd of 50 pedigree Beef Shorthorn cows.

Mr Richardson is keen to embrace all the modern cattle breeding tools that are available as he develops the herd – and that has included type classification which was introduced by the Shorthorn Society this year.

“One of the calves we retained from the initial flush from the Tofts herd has established our best family and she has just classified Ex92. She’s a big cow weighing 944kg and produced 19 embryos in her latest flush.”

Numbers have also been built up by purchasing in-calf heifers from the Stirling sales, while embryos and semen have continued to introduce Canadian genetics to the breeding programme.

“We’ve bought some very good female lines from both the UK and Canada to create a solid but fashionable breeding base. We purchased an embryo that had been imported from Canada which has established another good family for us.”

Bloodlines have been studied very closely as the herd has been developed but there has also been strict selection of females retained. “You have to make your own evaluations about what you want to breed and stick with your convictions.

“I’m convinced we’ve selected the right breed. The introduction of classification by the breed society has been a great step forward. We had 10 females classify VG and Excellent and we’ll now be using EBVs to back up type and performance as we select future sires.”

With a breed like the Beef Shorthorn that continues to be influenced by imported genetics, best use has been made of the internet to evaluate Canadian herds and the genetics they have to offer.

“It can be a bit like jumping in at the deep end but you’ve just got to do your homework and find a good breeder that you can work with.”

But introducing more muscle into the Beef Shorthorn continues to be a hot topic of discussion among breeders.

“If we develop too much muscle in these cattle we’ll lose the important maternal traits – although some buyers do want cattle with muscle.

“With the genetics we’ve imported from Canada we reckon we can safely bring in a little more muscle, but it’s a “dip in and dip out” scenario. After a dash of imported genetics we can go back to focusing on more traditional traits.

“There is a compromise, but we don’t want to lose sight of the Beef Shorthorn being a as a grass-fed breed.”

Cows in the Catterall herd are in-wintered on silage and straw, but bulling heifers – which are bulled at 420kg (around 15 months) – are also fed small amounts of concentrate.

“We’re calving some heifers at 23 months to speed up our breeding programme, so we want to keep them growing.”