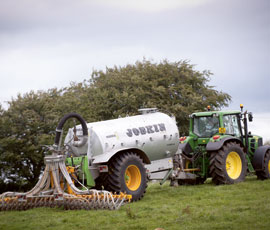 Sixty-five percent of slurry nitrogen value could be lost by incorrect slurry application.

Making the most efficient use of the nutrient value of slurry is directly linked to the way it’s applied. And with nitrogen fertiliser costs currently about £300/t and the value of slurry before spreading about £15/ha (£6/acre), getting it wrong can be costly.

Spreadwise consultant Fred Percival says the real “cash” value of slurry is at the point of spread – a value that can range from a minimal 5% loss using an injection system to about 50% loss when using a splash-plate.

“The method of slurry application has a huge impact on how much of its nutrient value you actually deliver to the land – and it will directly affect how much money you save on bought-in bagged fertiliser.”

“It’s important to remember when you can smell the fertiliser when spreading, the operation is costing you money because it means nitrogen is being lost.

“Slurry being sprayed into the air when it’s being applied by a vacuum tanker is losing at least 50% of its nutrient value.

“Surface spreading may be the cheapest way of getting slurry on to the land, but it also creates the most expensive level of financial loss in terms of wasting the nutrients that should be made available to the grass,” he added.

A trial of four different application systems (splash-plate, dribble-bar, trailing shoe and injection) at John Gate’s sheep and beef monitor farm, Knutsford saw about 3,000gal an acre (34,000 litres/ha) applied to grass fields that had been “bared” by overwintering sheep.

The consistency of the slurry was “thick” at about 8% dry matter and it delivered 1.1kg/cu m of nitrogen and 1.75kg/cu m of phosphate.

Slurry that was surface spread using a splash plate was estimated to have lost 50% of its nutrient value – primarily because the slurry was “thrown into the air” and its cash value as a fertiliser was severely reduced. The value of the nutrient delivered was estimated at £7.50/ha (£3/acre).

The second and third areas of evaluation in the trial used dribble-bar and trailing-shoe methods of application.

Both delivered the slurry more efficiently and showed an improvement in nutrient retention compared with the splash-plate system. Both the dribble-bar and the trailing-shoe applied an estimated nutrient value of £12/ha (4.80/acre).

“The dribble-bar, simply because it’s not throwing slurry into the air as the splash-plate did, achieves a much greater reduction in nitrogen losses. Compared with 50% of nutrient loss when applying slurry using a splash-plate, the dribble bar loss is about 20%.

The land at Langford Farm treated by slurry injection saw just a 5% loss of the slurry’s nutrient value and was estimated to have delivered £14.25/ha (5.70/acre) in fertiliser cash terms to the grassland – by far the highest in the trial.

“Injecting slurry is by far the most efficient in terms of ensuring the maximum amount of the slurry’s nutrients are applied to the land – but if you’re using a contractor you need to do your sums carefully. A contractor won’t cover the same amount of ground using an injection system compared with a dribble-bar.

“An injection system will deliver 16-17,000gal an hour compared with a dribble-bar at 20-25,000gal an hour. And contractors’ charges are higher for injection application,” said Mr Percival.

And there were added benefits gained by the physical process of slurry injection. “The ground is opened up and oxygen can get into the soil,” he said.