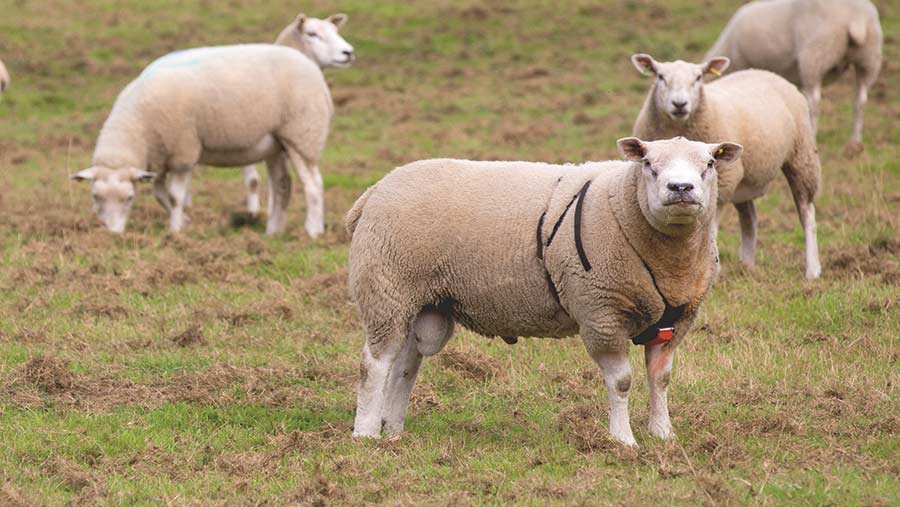 Three new estimated breeding values (EBVs) have been generated as a result of a major sheep industry breeding initiative.

The new values will help commercial producers select rams that have the best potential to produce progeny that is more likely to meet market specification. Currently, only 62% of new season lamb carcasses hit EUR 2,3L in Britain.

The values have been produced as a result of the culmination of phase one of the AHDB’s RamCompare project, assessing the performance of progeny from 70 rams across five breeds (see About RamCompare project (right) for more information). The new traits include:

Currently, the traits are only available for the rams compared on the trial, but the long-term aim is to incorporate them into the National Terminal Sire Evaluation – which will be analysed on a combined breed basis in the future (see Combined breed analysis, below).

Revealing the preliminary results at the Sheep Breeders Round Table on 17 November, Signet’s Sam Boon said one of the most interesting findings was that rams that had better CT scanning EBVs bred lambs that killed out with higher carcass traits.

In particular, there was a clear correlation between CT lean weight EBV and carcass weight, he added.

He said the results showed that pedigree breeders needed to pay more attention to CT scanning information. Meanwhile, he said commercial breeders could capture greater financial rewards at the abattoir by looking more closely at these EBVs when selecting sires.

“It shows the value of purchasing animals of higher genetic merit, because there is a real financial difference [between the top and bottom],” Mr Boon added.

The RamCompare project was launched in May 2015 and is the UK’s first commercial progeny test for terminal sire rams.

Over two breeding seasons more than 4,000 ewes were mated to more than 70 leading rams (Suffolk, Meatlinc, Texel, Hampshire Down, Charollais) through artificial insemination and natural service on six UK farms.

Performance of 6,000 progeny has been recorded from birth to slaughter, with the information fed back directly into genetic evaluations.

Abattoir data has been collected in collaboration with Sainsbury’s, Dunbia and Randall Parker. Saleable meat yield information is also being carried out on at least 15 lambs per sire.

This information will be available in May 2018 with the inclusion of a further 1,500 carcass records.

Phase two of the project is well underway, involving eight farms in England, Wales and Scotland plus a research farm in Northern Ireland.

This means more data can be collected on hard-to-measure traits and rams from more breeds are being tested.

In February 2018, there will be a major change in the way terminal sire evaluations are delivered. A Combined Breed Analysis (CBA) delivered by Signet will replace the existing individual breed analyses.

The CBA evaluates all terminal sire breeds together in a single best linear unbiased prediction (BLUP) run, with results from each breed then reported individually – similar to that carried out by the dairy industry.

A new base will be set for each breed, with new EBVs from CT data.

It will allow evaluations to be carried out faster and more regularly to allow quicker breeding decisions to be made. It also means cross-bred rams can be compared more accurately than previously.

Currently, cross-bred ram genetics are underplayed because one-half of the pedigree is treated as unknown, but with the new evaluation both sides of the pedigree will be taken into account.