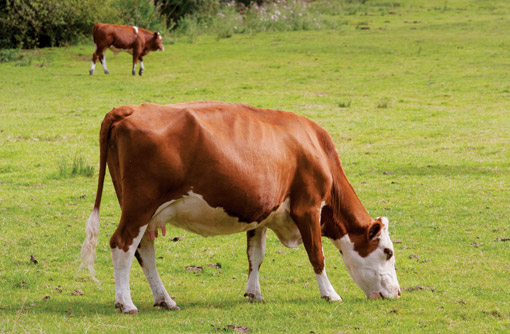 Now is a good time for farmers to review their summer grassland performance and correct problems to maximise performance next spring.

According to Simon Trenary, Countrywide Farmers agronomist, soil samples should be the number one priority on farmers’ list this month to ensure optimum soil pH and P and K levels.

“If you have the soil in good heart everything else will come right.”

Target soil pH is 6.5, whereas indices for potassium and phosphorus should be 2.0.

Weeds have thrived in the recent dry spell of weather. As a result, many grassland farmers have seen a surge in the growth of thistles, nettles and docks so weed control should also be to be high on the agenda.

“They are lower in cost, but they’re not effective long term. They will kill surface growth, but you won’t kill the roots and they will recover from the root and re-establish next spring.”

Instead, he recommends topping weeds first and waiting 10-14 days for the flush of September regrowth so weeds are “young and fleshy” before treating with a systemic product.

He says topping will ensure the treatment reaches the roots and will give a higher level of kill.

The prolonged hot weather this summer has exacerbated soil compaction issues on many farms and September offers a window of opportunity to address problems before it gets too wet later on in the year to work heavy machinery.

“Go out into the field and dig a hole and see what damage you’ve got. Once you know, you can decide how best to sort it,” says Mr Trenary.

“If the damage is severe you may have to consider completely renewing the pasture with a subsoiler to lift and shatter the soil.

“If the damage if not too bad and is higher up in the grass, you could consider using a grassland subsoiler,” he adds.

Mr Trenary says making sure ditches are clear to allow water to run off is paramount.

He says ditches have been forgotten about in the last few years, but if they’re not in good working order any grassland work will have been a complete waste of money.

Lois Philipps from the British Grassland Society says poor pastures left last autumn will have been exacerbated by low rainfall this summer and are unlikely to recover in the autumn flush.

Some farmers may have left some poorer fields intact if they had a lot of remedial work to do last year, but Ms Philipps stresses those poorer leys must be earmarked for re-seeding, or else farmers could risk yields.

She predicts the dry summer and consequent slow grass growth may have also caused a higher spate of “sod-pulling” – where cattle graze too hard and pull up grass roots- and pastures may be left looking patchy as a result.

“If grass failed to grow back lush and green after first grazing, the animal would have been hungry and may have tried to get more nutrients by biting lower,” she explains.

Consequently, bare patches will succumb to weeds and swards will be less productive, she warns.

Meanwhile, she warns grazing must be brought under control before the winter.

“Don’t go into the winter with great swathes of grass,” she warns. Instead grass should be grazed down to about 3.5cm in length to prevent die back and protect against frost damage.