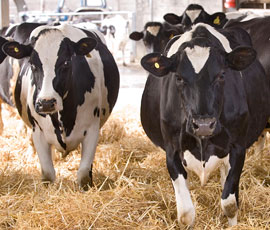 High yields, breeding and a lack of investment are often used as excuses for poor fertility. But with the correct management, reproductive performance does not have to suffer.

The herd of 400 pedigree Holsteins at Broompound Dairy, Dorchester, are achieving better-than-average fertility results, yet yielding more than 10,000 litres a cow a year.

And all this is achieved on a unit that reflects many of the older set-ups seen on British dairy farms.

The recent Metricure National Fertility Survey – representing 5% of the UK cow population – found more than half of dairy farmers considered fertility something that should be improved.

And yield appeared to be one of the key influencers to poor fertility. Only 8% of high-yielding herds surveyed (more than 9,000 litres a cow a year) had a calving interval within the preferable range of 365-390 days.

Low-yielding herds (less than 6,000 litres a cow a year) accounted for 58% of the herds in this bracket. These herds were also more likely to achieve the target level of culls for fertility (5%) compared to high yielders.

Mr Burnell, a vet at Synergy Farm Health, talks about the key findings from the survey and the team at Broompound explain how they achieve good fertility:

“Fat cows are more likely to experience extended lactations. Somatic cell counts will creep up and the cow will be set up for a worse start to her next lactation.”

“We want a consistent business model and this stems from getting cows in calf. Our aim is to achieve a calving interval of 385 days for all our herds.”

For optimum milk production, the business targets between 160-175 days in milk. “Extending this figure by 10 days will result a loss of a litre a day in milk production, adding up to at least 120,000 litres less milk sold a year.”

According to Mr Cobb, achieving these figures all comes down to cow health and comfort. “Our lameness is almost non-existent. Cows are comfortable and show good, strong heats because the ration is consistent.

“There are a lot of constraints on this farm, but despite an imperfect system, we are still achieving good results.”

After taking on the farm four years ago, a new herd manager was employed, sand beds installed and the parlour updated to help create the best environment for the cows.

A roll-over crush has also been bought and the farm has worked with Bristol Veterinary School to improve mobility scoring skills as part of the Healthy Feet Project. The herd is now scored four times a year by Mr Burnell. Herd manager, Nick Moore also picks out any lame cows at milking and ensures prompt treatment.

Survey: “More than 50% of farms are above the target culls for fertility”

“These cows are not necessarily infertile, but are not in-calf at the right time, meaning it is a management issue, rather than a cow problem. These losses represent a huge waste. Ideally culling rate for fertility should be below 6%.

“The key is to learn how to manage the high yielder without comprising fertility, There comes a point where farmers need to realise they can’t get something for nothing.”

Broompound has a rolling average culling rate of 21%, with 5.1% of animals culled for fertility.

Fresh cow problems and lameness levels are low, with 7% score two and three at the last mobility score. Because they can walk well, they eat well, says Mr Burnell.

“Cows are averaging more than 10,000 litres a cow a year, so are working hard, but the environment is set up to accommodate for the cow’s needs.”

All stock are also vaccinated as an insurance policy. “During a vet visit we talk about management changes rather than disease.”

Good heat detection is also key to achieving good fertility results. Although heat detection rate does not determine conception rate, by picking up cows quickly, they can be served earlier. And by getting cows pregnant at the right time, they stay fresh.

The farm uses RMS (Reproductive management systems) to chalk cows and monitor oestrus. However, the team at Broompound are still actively involved in fertility management, using RMS to release the pressure, rather than rely on it completely.

We installed a herringbone management race two years ago and decided it could only enhance fertility results if we picked out cows ready for our RMS technician, explains Mr Moore. “This saves the technician time and also helps farm staff feel involved and thus interested.”

Survey: “24% of those surveyed did not set any fertility targets”

“It is worrying that any business should not set any targets,” says Mr Burnell. “Targets will be farm specific, so discuss with your vet what is appropriate on your farm.”

Mr Burnell likes to screen all cows before breeding – ideally from 25 days post-calving onwards. “Non-bullers should be non-bullers and not dirty cows. When a cow has not been seen bulling 65 days post-calving, don’t forget her after the vet has seen her – track her through.”

Broompound has weekly vet visits with pre-breeding checks carried out on all cows 25-30 days after calving. Any cows with whites are then monitored.

“Breeding targets are also strict – when an animal has not been seen bulling by day 65, we’ll do something straight away,” says Mr Burnell.

“Cows must fit with the system and there should be no exceptions outside of the plan – making decisions based on individuals doesn’t work.”

“I am surprised by this figure – I would have thought the importance of nutrition on fertility was more widely understood,” says Mr Burnell. “By not feeding cows correctly, they are more likely not to cycle or be cystic and are more prone to endometritis.

“The focus should be on energy supply in early lactation, which is governed by dry cow feeding. However, energy must be provided in a safe and balanced way in. Close attention must be paid to how clean troughs are and how much feed is being rejected.”

“Feeding has to be right and well balanced. By feeding a high-energy ration, we are seeing good heats for the yield they are giving.”

High yielders are receiving 22kg maize silage, 10kg grass and lucerne silage, 5kg Trafford Gold, 5.2kg blend and 0.25kg fat. This is then topped up in the parlour with between 2-5kg cake depending on yield, body condition and status.

A mycotoxin binder is also included in the ration to counteract any potential mould in the silage which could cause abortions.

“If nutrition consistency is maintained, I anticipate further improvement in fertility. Getting the transition period right – three weeks before and three weeks after calving – is crucial and this partly depends on maintaining optimum body condition in late lactation.”

Fresh cows and heifers are housed in a separate building for the two weeks post-calving. A low stocking rate and plenty of feed space helps heifers settle in and allow fresh cows to be monitored.

Dry cows are managed on a separate unit allowing the team at Broompound to focus on milk production, rather than calving cows. Cows are dry for 45 days and kept on the same ration up until calving. By keeping it simple, it makes it harder to make mistakes, says Mr Moore.

“Fresh cows are given the same ration as the high yielders, but with the inclusion of more hay. This eases the transition from the dry-cow diet onto the high-energy diet.”

The bovine egg takes 60-80 days to develop before being released to be fertilised, so when service takes place from 40 days post-calving, the egg will have formed during the dry/transition period, explains Mr Moore.

“As a result, poor nutrition, health or other insults at this time will affect egg viability. Similarly when eggs are formed around calving, any metabolic disorders could affect conception due to poor egg quality.”

Mr Moore says that having an overall holistic approach is key to achieving good fertility. “Being in tune with the cows and making adjustments to the way we use the facilities to suit them better, truly reaps rewards – they tell us what they like.”