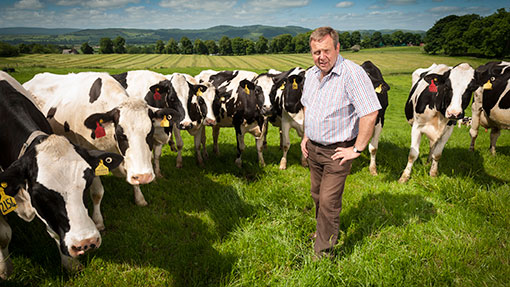 Using manures better on grassland has helped the current Farmers Weekly Dairy Farmer of the Year to cut the amount of purchased fertiliser by two-thirds.

One of many trials being carried out at SRUC’s Crichton Royal Farm, Dumfries, is looking at ways to increase the use of organic manures.

“The farm is mapped regularly for soil status and the amount of purchased N is now at 50t from the 150t 10 years ago, with no P and K purchased in the past eight years,” SRUC’s Hugh McClymont told farmers at an open day earlier this week.

“This has been done by shallow injection, underground pipe network, slurry separation mechanical and natural, analysing and budgeting of nutrients required for each crop requirement.”

It has led to further research work by the DairyCo Grassland Forage and Soil Research Partnership.

Farmers across Britain are also benefiting from work at Crichton Royal in terms of genetics. “Choosing the right bull to breed the next generation of cows to suit UK systems has become much easier, helped by the work carried out at Crichton,” said Marco Winters, head of genetics at DairyCo.

“In the past few decades we have seen many significant improvements in the breeding tools available for use in the dairy industry.

“The information available on AI sires today is more complete and more accurate than ever before. An important source of many of these developments has been the information generated by the selection experiments of the Langhill and the Crichton Royal herd.”

The Crichton Royal herd has attracted world-wide interest because of the vast amount of data, alongside unique genetic and genomic information that it is able to contribute to some exciting new research; such as the genetics of dry matter intake and genomic discoveries.

The UK dairy breeding industry has gained from this acquired knowledge and has incorporated this into the development of the dairy indexes, known as the profitable lifetime index (PLI).

The PLI will see a further update in August 2014 and much of the groundwork on genetics of body condition scoring, body energy requirements and predictions of mature liveweight were developed using Crichton data.

The event was jointly organised by SRUC and RABDF. The college has 550 milking cows, divided between Crichton and nearby Acrehead farms, producing some 4.3m litres a year from a three-times-a-day routine, from the all-year-round calving herds.