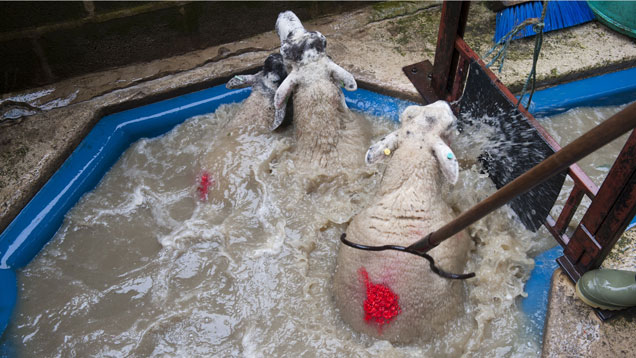 Stringent action against sheep farmers not tackling scab were proposed at the conference with common grazing identified as a key reservoir of the disease.

Since 1992 when mandatory treatment was de-regulated the number of reported cases had increased significantly, explained Richard Wall of Bristol University.

“In 1992 there was a round 100 cases a year and we know that’s increased, but we don’t have clear data (to determine the current level).”

“In a survey of 800 farms in 2007/8 75% reported scab had never been a problem. Of those who did have scab 30% had it repeatedly so we know we don’t clear it from these farms. Many used common grazing where if one producer doesn’t take action the rest will get it anyway.”

This indifference had been tackled successfully in the North East, explained Joe Henry of the Alnorthumbria Vet Group, by ensuring affected producers took responsibility of the disease.

“If we discover scab we ask the farmer to ring all his neighbours and tell them or – if they’re reluctant – we ask permission to do it on their behalf.”

Neighbours then attend a local meeting within a week to nominate a chairman and agree an action plan for the treatment of all sheep within a defined period to stop the spread of scab. “You have to consider non-farm stock such as feral sheep and take action to cull them,” he explained.

And he would go further suggesting all sheep could be tested and treated in February – avoiding disruption to the breeding season for hill farms – to stamp out the disease nationally.

“I don’t see why it cannot happen and those that don’t comply should face having part of their SFP taken away just as you do for not having the correct eartags.”

Professor Wall was fearful scab couldn’t be cleared nationally due to devolved countries taking differing stances on whether or not to make notifying scab mandatory (recently the Welsh Assembly decided to the contrary).

“Accepting this view we can at least start to mange the disease,” he reflected. However, his experience suggests this will get more difficult in the near future as resistance to organophosphate and pyrethoids had been reported in scab mites since the mid 1990s.