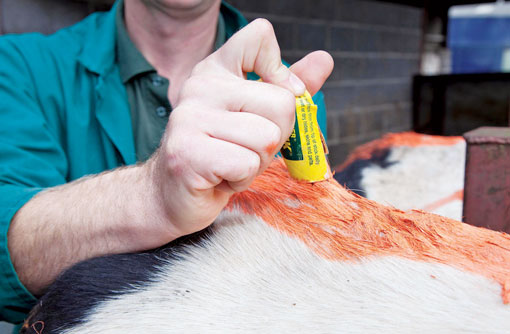 A targeted approach to breeding has helped expand a herd with excess heifers to spare on one Wiltshire farm.

Finding the time for dedicated heat detection can often be a challenge on many dairy farms. But farmers Jane and Guy Lewis and their son Chris have clearly found a solution that works for them, with 21-day rolling pregnancy rates hitting 25%.

After switching to a dedicated breeding service 10 years ago, the Lewis’ have stricter breeding protocols in place and swapped their DIY AI for trained technicians.

All the cows in the herd are AI’d with conventional semen and heifers with sexed semen to increase the numbers sold. Mrs Lewis says one of the biggest differences they saw was the increase in heifers.

“While maintaining the cull rate there were still excess heifers, we were able to sell 15-20 annually for a good additional income.”

The Lewis’s have now succeeded in expanding the herd using their own heifers and still have surplus stock to sell.

When changing to a dedicated breeding service, results were seen from day one, with about 30 cows being artificially inseminated in the first week.

There was an immediate impact, says Mrs Lewis “Within six weeks the first lot of pregnancies were confirmed and there was a reduction in pressure for the stockman. The results were phenomenal,” she adds.

The breeding service has had many benefits for the Lewis’s. A 1% increase in pregnancy rates is worth £24 a cow/year and £4 a day/cow is saved for each day that calving interval improves, depending on the yield.

“There has been a psychological impact too. A friendly face comes in to take some of the responsibility away; there is a feel good factor,” says Mrs Lewis.

The Lewis’s were first introduced to the Reproductive Management System (RMS) when Genus ABS were setting up their breeding service on a neighbouring farm. The breeding advisor didn’t even get five minutes down the road, recalls Mrs Lewis.

“At that time we were not making good breeding decisions and with nowhere to go, it was an easy decision to make.”

RMS is a systematic approach to maximising pregnancy production on large dairy farms. It is a whole-herd approach, where a technician walks the cows 365 days a year, identifying both primary and secondary signs of heat.

“To have not just the technician, but several pairs of eyes on the herd is important. What was once a fragmented business became a team effort. Everyone came on board, even those who were unsure were sold by the results seen,” says Mrs Lewis.

RMS technician, Laura Spencer, explains how they can improve pregnancy rates. “I do the same thing on every farm, yet others are achieving 16–19%.” Good communication and the team approach is what really makes the difference at Mile Elm Farm.

Mrs Lewis says the person visiting the farm is the front line, but without the backup they won’t survive. “You buy into the system, not just the technician,” she adds.

This was emphasised when the Lewis’s decided to move away from RMS. “As soon as we left we realised why it was so important to have the support network,” says Chris Lewis. The next 12 months saw pregnancy rates crash to 13% and the cost them £30,000-£40,000 in reduced milk yield. “Cows were left empty and open, it had a massive knock on effect on our cashflow,” he adds.

This time round, joining RMS was an equally easy decision, but one born out of necessity to save the family business. Mile Elm Farm still had to ride out the delayed financial impact for a further 11 months until milk production increased.

Even after that there were still problems with the then over-fat cows not getting in calf the following service either.

As Bryn Jones, Technical Services Manager of Genus ABS explains, maintaining a steady flow of pregnancies drives farm efficiency and farm income. “Fluctuations create management difficulties and maintaining pregnancies at a high level pays dividends. Ensuring pregnancy rates are high means you don’t end up with fat dry cows with metabolic problems and it’s easier to get them back in calf,” he adds.

The price for RMS is £38 a cow a year, which includes 365 day heat detection, AI, data collection and analysis. These payments can be spread over 12 months.