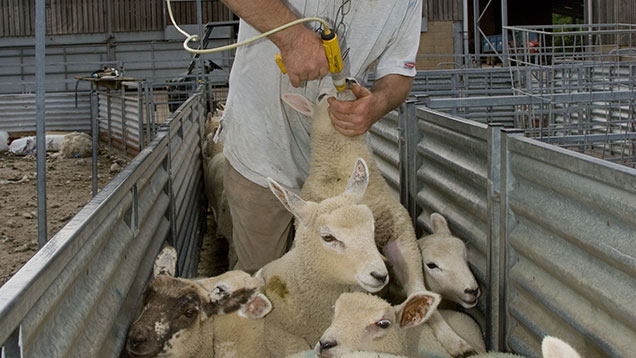 Using multi-active wormers in lambs to kill as many resistant worms as possible has been shown to slow or reverse wormer resistance, according to recent trial results.

Researcher Dave Leathwick, principal scientist at Agresearch, New Zealand, found when a multi-active wormer containing ivermectin and levamisole was used on lambs in a three-year field trial, it slowed the development of resistance, with the best response shown in groups that also had 10% of animals left untreated.

In another study of 20 commercial farms, chosen because of their worm resistance, the effectiveness of the multi-active drench improved.

Speaking at a meeting on the future of sheep worming last Tuesday (4 August), Dr Leathwick said farmers in the UK needed to look at protecting some of the susceptible worm population. This would allow the susceptible worms to outcompete with the worms resistant to treatment.

By reducing the number of resistant worms any resistant survivors will be more likely to breed with susceptible worms, which will dilute their resistant genes.

For example, Dr Leathwick said by using a single active treatment farmers may be able to kill up to 98% of worms, but it’s the remaining 2% that are the resistant ones and those are the ones farmers need to worry about.

When using a multi-active, if the second drug is also 98% effective – but crucially is also effective against those that survived the first drug – this results in 99.96% of worms killed or a a 50-fold decrease in the number of resistant worms that have survived treatment.

So identifying the worm species on farm and testing the effectiveness of drenches used against these is vital to allow farmers to make an informed decision on treatment, he added.

Lesley Stubbings of Scops agreed that using an effective treatment was key.

“We know a large proportion of UK sheep farmers are using wormers that are not fully effective and as a result are getting reduced lamb performance. Testing to see if your wormer is working is a critical first step along with making sure that the dose rate is correct and administered properly.”

The Sustainable Control Of Parasites in Sheep (Scops) guidelines recommend using one of the two newest drenches, called 4-AD also known the orange drench (single active), or 5-SI also known as the purple drench (multi-active), plus moxidectin as a quarantine treatment in order to kill all worms to avoid importing resistant ones.

“Using only one product risks allowing worms that are resistant to that product surviving and entering the flock,” she said.

What is worm resistance?

Resistance is the genetic ability of the worm to survive a dose of anthelmintic, which would normally be effective. Resistance is said to exist when more than 5% of the worms are drug tolerant. As more worms become resistant, animal performance will be compromised.

How does resistance develop?

Sustainable Control of Parasites in Sheep (SCOPS) says there are five key factors that contribute to the rate resistance develops.

What are multi-active worm treatments?

Multi-active drenches contain two or three different classes of active ingredient that act on different worm species. It is not the combination of a wormer with something like a flukicide as these two products work on different groups of parasite.