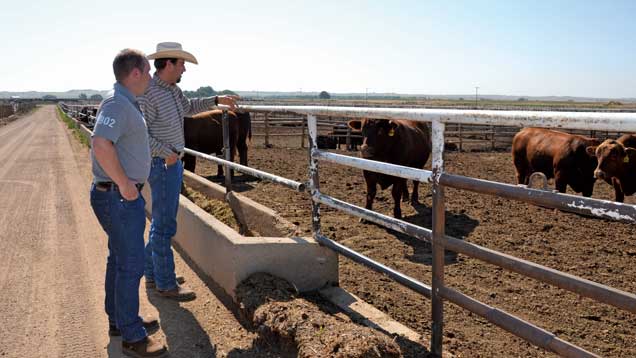 Whether it’s supply chain integration, carcase grading criteria or the use of composite bulls, the UK beef industry has a lot to learn from the USA.

Visiting beef feed lots and suckler producers in Iowa and Kansas has opened Richard Pennock’s eyes to the huge potential for UK beef producers to improve efficiencies and secure a bright future.

From ultrasound scanning live cattle to determine management requirements, to breeding specific “types” of animals, every step is geared towards maximising consumer experience and returns for everyone in the supply chain.

Travels as part of his Nuffield Scholarship have shown Mr Pennock that the only way significant improvements can be made in the UK is through dramatic changes to the carcass grading system.

“The UK carcass grading system is so outdated. We need to justify the premium consumers have to pay for beef and produce a product that will deliver good taste and consistency,” he says.

“The Europ system currently used means farmers are focused on producing showy animals, not eating animals. The fact there is no payment for eating quality is one of the biggest shortfalls of the industry.”

In the USA, carcasses are graded on rib eye area and marbling, however Mr Pennock says by far the best system is that used in Australia (see box). Their grading system is focused even more on meat eating quality, which incentives farmers to produce a good eating animal.

Simon Marsh from Harper Adams University strongly agrees that the UK should have a grading system similar to that of Australia.

“The number of native beef schemes available in the UK shows the premium end of the market is already rewarding for better eating quality for steers or heifers reared on grass based systems,” he says.

“We need to guarantee meat eating quality across all beef rather than just the top end and we can only do that by changing the grading system.”

“Rather than getting caught up with using a specific breed, a growing number of US suckler producers are using composite terminal bulls. This can bring big benefits from improved hybrid vigour and better growth rates,” he says.

A specific group of seed stock producers in the USA are now breeding “types” of bull using a mix of breeds to meet specific performance targets (see box). Although targets will be different in the USA, Mr Pennock thinks UK farmers should consider designing their own composite terminal sire to meet our own market requirements.

Mr Pennock hasn’t been able to put these breeding lessons into practice on the beef side because the farm he manages on behalf of the Morrisons family buys in cattle at 18-20 months.

However, he has started using a similar principle on the ewe flock and is now using the five way cross MeatLink, on the flock of Lleyns ewes at Myton Hall Farms, Boroughbridge, Yorkshire.

Breeding a “type” of cattle that meets requirements for a moderate, high fertile animal with the ability to perform efficiently on an extensive system is the aim of Iowa seed stock producer Steve Radakovich.

Mr Radakovich and his wife Penny have developed The Adapter – an open ended composite designed to meet specific US environmental and market requirements.

He started by crossing his Hereford cows with a Barzona – a composite animal bred in Arizona to cope with the arid conditions.

This healthier and hardier F1 cross is then bred to an Aberdeen Angus for muscling. A red Aberdeen Angus is used to produce a Red Adapter or a black Angus to produce a Black Adapter. This F2 is then put to another composite bull made up of moderate sized breeds.

All stock run by The Radakovich Cattle Company are kept extensively on a forage based system of maize, grass silage, hay and grazed grass.

“It’s possible to accelerate genetic progress by using composites and you can make cattle more adaptable by selecting for the traits you want,” says Mr Radakovich.

Rather than getting caught up with using specific breeds or incorporating a certain percentages of each breed, the aim is to use different breeds in the optimum combination. This could include any composite breeds from around the world depending on what traits were desirable.

Speaking further about ways to improve UK beef efficiencies, Mr Pennock says the structure of the beef industry, and particularly the store stage, is another limiting factor

The carcass is given a grade code of 0 if all the specifications are met. Detailed grading reports and summaries are sent back to the producer.

“It’s a waste of energy keeping cattle as stores as they tend not to grow well during this period. If I had my way the UK system would be similar to the USA – the suckler side would remain the same, but weaned calves would then go straight to one unit where they would remain until finish,” he says.

One feed lot in Kansas took Aberdeen Angus calves at weaning and kept them for 180 days until finish. Fed on a simple high starch, maize, wheat distillers and hay diet they achieved growth rates of about 1.6-1.7kg/day (excluding hormones).

“In the UK I’d expect stock to do about 1.4kg in the same period. In the USA they also finish cattle younger on average at about one year old,” he says.

Many of the US feedlots also operate retained ownership schemes where the suckler producer would keep a share or 100% ownership of his cattle and pay the feedlot a headage fee.

“It’s an integrated system so everyone has a vested interest in how cattle perform and there’s feedback on killing out percentages back to the suckler producer. This would be of huge benefit in the UK,” says Mr Pennock.

Many US feed lots will EID calves on arrival, regularly monitor weights and use camera measurements on live animals to assess hip height and length. Ultrasound will also be used to assess fat levels and determine groupings and management.

“They call this the Optimum End Date Method which means they can determine when they are going to sell and to which market,” comments Mr Pennock.

The 1,000 head of beef run at Myton Hall Farms are already EID tagged on arrival and weighed regularly. This allows purchasing decisions at live auctions to be made based on breed performance patterns.

“As a result of my Nuffield I’m going to improve how we use the data we record and look closely at growth rates, performance and feed conversion rates,” says Mr Pennock.

Eating experience is at the heart of the carcase grading system used by Meat Standards Australia (MSA). Their aim is to assure the customer a tender, juicy eating experience, every time.

Some of the areas an MSA grader will look at when grading a carcass include:

For full details of specifications, watch a video on how the MSA grades beef