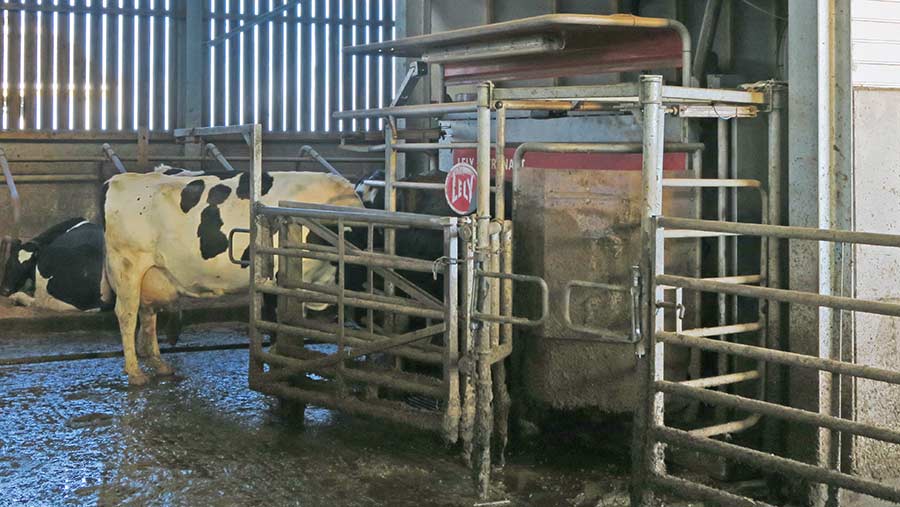 While many farmers are moving to grass-based systems to lower costs, one family farm in Shropshire has decided to do the complete the opposite in order to future-proof their dairy business from market volatility.

The strategy has had resounding success, with cow yields doubling to over 50 litres per cow and costs falling dramatically – making them the seventh highest robotic system for milk production in the world.

In 2017, the herd ranked the seventh highest yield a cow a day in the world on robots. So far, this year, cows are producing 4 litres a day more on average.

The couple took over the family business in 2011 and decided to go back to the drawing board.

“We knew if we wanted to future-proof the dairy business, we had to make changes,” says Mr Ashley, whose parents began farming on a 1.1ha council holding 48 years ago, before moving to the 46 ha farm the family currently own in the 1980s.

Previously the unit accommodated a traditional grass-based system. The herd numbered 40-50 cows with production averaging 7,500 litres a cow a year, on a six-unit-abreast parlour.

However, with production costs of 40p/litre, the couple knew they needed to change direction.

“We spent two years meticulously researching and planning every aspect, seeing which system would suit both our farm and lifestyle, as well as the cows.

“We decided that a robotic system was the way forward, as it would free up some time from milking to allow us to pay closer attention to detail in other areas of herd management,” explains Mr Ashley.

The first robot was installed in 2013 inside a shed alongside 65 cubicles.

Cow numbers were increased from 66 to 80, through breeding their own replacement heifers, with Holstein genetics introduced to lift yields.

Mr Ashley previously ran a contracting business while finishing his own beef cattle, which he used to finance the new robot and sheds, but the couple also looked for additional funds.

“The farm infrastructure required significant funding, but ultimately it has allowed us to significantly increase outputs in a very short space of time,” says Mr Ashley.

The project required a big capital outlay but, having scrutinised the figures and developed forecasts based on increased cow numbers and yield, the couple are confident they can payback the investment within 10 years.

Milk production has increased from 24 litres a cow a day on average in 2013 to the current herd average of 51 litres a cow.

The couple say the improvement has been a direct result of switching to robotic milking coupled with high attention to the detail of the management and nutrition of the herd.

When the robots were first installed, the cows continued to graze in the summer months, but two years ago the decision was made to house all-year-round (AYR) as they were seeing a marked drop-off in both yield and fertility at turnout.

“We’ve seen big improvement in cow performance, with a constant progression ever since introducing AYR housing. This is largely a result of having greater control over cow nutrition,” says Mrs Ashley.

The milking herd is fed one total mixed ration (TMR), with an average of 9kg of concentrates fed in the robot, to keep output consistent across the herd.

The main priority is to minimise feed costs by maximising milk from home-grown forage.

The cows currently each achieve 15 litres of milk from forage within an additional 33 litres produced from concentrates.

Last year was the first time they practised multi-cut forage-making, taking five cuts instead of the usual three and the Ashley’s believe this has made a big different to forage quality.

This is helping them to keep the ration cost down, and reduce purchased feed costs to 7.7ppl.

“This is a result of small alterations to the ration and a strong focus on grassland management, to maximise forage quality, allowing them to achieve a very good IOPF (income over purchase feed) of £950 cow/year, helping ensure the dairy business delivers a sustainable return,” says Mark Price, Wynnstay dairy specialist, who works with the Ashleys.

Further investment is planned over the next five years, with a new dry cow shed already under way.

The Ashleys are also looking to add a third robot, which would allow them to increase milking cow numbers to 165 head.