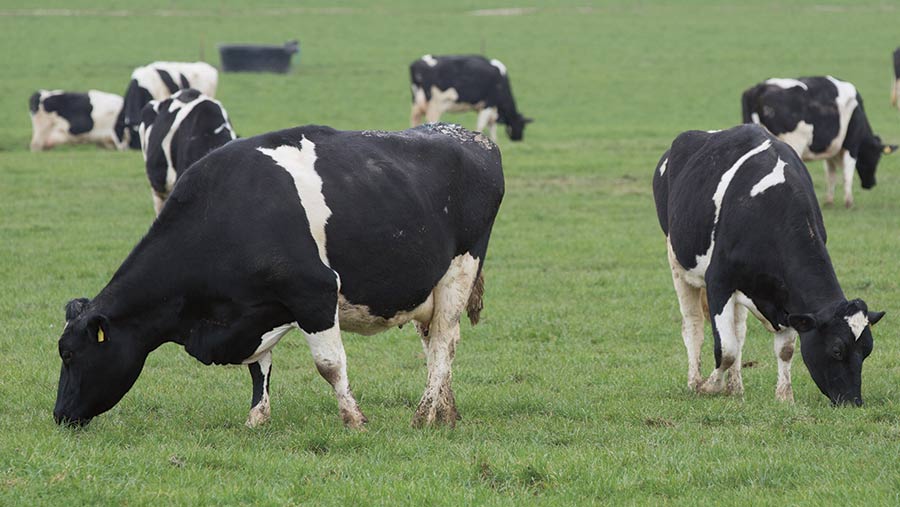 A leading dairy researcher has claimed there is no place for high-input dairy systems in the UK.

“From an efficiency point of view no one should be operating an all-year-round calving system.”

Instead, he believes all herds should be maximising the use of pasture by moving to autumn and spring blocks to lower costs and drive labour efficiencies while maintaining a level supply year-round.

See also: 7 ways to help you achieve a six-week calving

He also argued that the UK dairy industry had set itself back by three years over the past year because it didn’t have systems strong enough to withstand volatile milk prices and said greater cohesiveness was needed to drive profitability at farm level.

“Everyone can produce milk when the price is high. The best test is when milk price reduces, and if you look to countries that didn’t reduce milk production – they have the resilient systems,” Dr Dillon told delegates at the Ireland genetics conference in Gloucester last week (16 November).

UK milk production for September was down almost 10% compared with the same time the previous year and cow numbers fell dramatically by 37,000 (2%) to 1.8 million in the 12 months up to July 2016.

Dr Dillon said this would hamper the UK’s ability to meet growing global demand from countries such as China.

He said the UK should learn from Ireland’s low-cost of production model, where 85% of herds were now operating spring-calving systems.

“There is no relationship between milk yield per cow and profit per litre.”

However, he said there was a clear link between profit and grass used.

Data from the Nation Farm Survey in 2015 showed that there was a clear correlation between grass utilised per hectare and gross margin.

Dr Dillon said UK farmers had the same comparative advantage as their Irish counterparts – to produce milk cheaply off grass – with both countries alike in climate and soil type.

But to help achieve this he said the UK industry must unite and identify common goals to make greater strides in breeding and grassland research and development.

In Ireland, genetic improvement is being driven through the non-profit, national Irish Cattle Breeders Federation database, which was set up in 1998, with information such as genetic evaluations, milk recording, health and disease and carcass data, fed back to farmers and the industry to identify areas of improvement.

Your views on calving herds

It is estimated the Economic Breeding Index has delivered improvements in fertility and production to the tune of €631m to the Irish dairy industry and will deliver a further £1.13bn in the next five years.

“It took a while to plan [but] we have all joint programmes now with all of the companies and we have agreed what we are doing with the main milk processors and we have all brought into one approach.

“[In the UK] you need a couple of innovative farmers and companies that will say ‘we are here for the good of the industry’ – it has to be the way to go.”

“All that information that feeds into the ICBF database would be available in this country but we can’t make use of it because it is all in different places and there’s so much self-interest.”