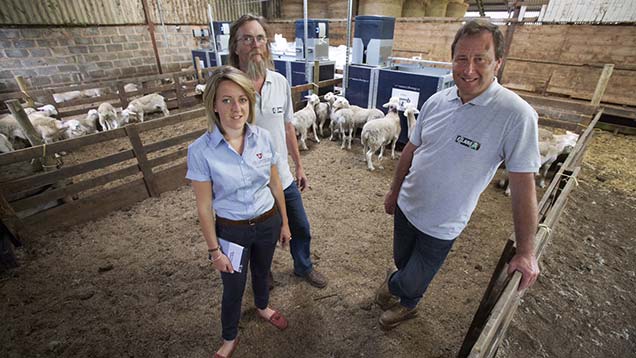 The trials will see a selection of this year’s Exlana ram lambs monitored for their feed conversion rates in an attempt to identify the most efficient maternal breeding lines.

It will take place at Sheep Improved Genetics (SIG) director Peter Baber’s Christow, Devonshire, farm and will use the same technology as has been used in the US and the UK to identify feed efficiency in Stabiliser beef cattle.

This involves animals eating from feed bunkers with feed weighed as it is eaten and each animal’s intake recorded electronically every time it feeds.

Lambs in the six-week trial will be fed a grass pellet to mimic, as closely as possible, the diet of a grazing animal.

The first batch of 40 ram lambs entered the trial at the end of June and researchers are hopeful the first results may be available in time to influence this autumn’s breeding decisions.

Exlana breeder and SIG director Tim White said: “Identifying the most feed-efficient lines in maternal breeds is particularly important as it can give the potential for more ewes to be kept on the same ground, helping increase output and profitability per hectare.”

Trials from the US have shown some sheep can take as much as twice the feed as others to gain 1kg of liveweight, said Mr White.

“That is a significant difference in feed intake and if our trials identify similar differences then we could quickly make significant gains in the Exlana breed.

“There are potentially large savings to be made when you consider that a breeding ewe spends a relatively small part of the year as a working ewe. If we can identify animals even just 10% more feed efficient then it would mean there is potential to keep 110 ewes where 100 are kept now.”

Asda agricultural manager Pearce Hughes said the value of this work to the sheep industry could be huge over time. “Developing more feed-efficient flocks has a series of benefits, both on-farm and off-farm. Not only does it have the potential to allow more ewes to be kept, it could also result in significant feed savings and in-turn lead to reductions in greenhouse gas emissions, helping cut the carbon footprint of lamb production.

“Asda is firmly committed to sustainable British sheep farming and finding the most feed efficient breeding lines is an important step in developing a profitable sheep farming sector,” he added.

Mike Coffey from Scotland’s Rural College said the trial is the first step in creating a UK capacity to produce even more feed intake records, leading ultimately to genomic selection for feed efficiency.

The first step in producing breeding values that enable producers to permanently capture the benefits of improved feed efficiency is having sufficient good quality phenotypes, he explained.

“At that point the benefits can be more widely dissipated across the whole industry leading to huge economic benefits as well as reduced environmental impact. This is a long-term exercise and the partners are to be congratulated in taking the first step.”