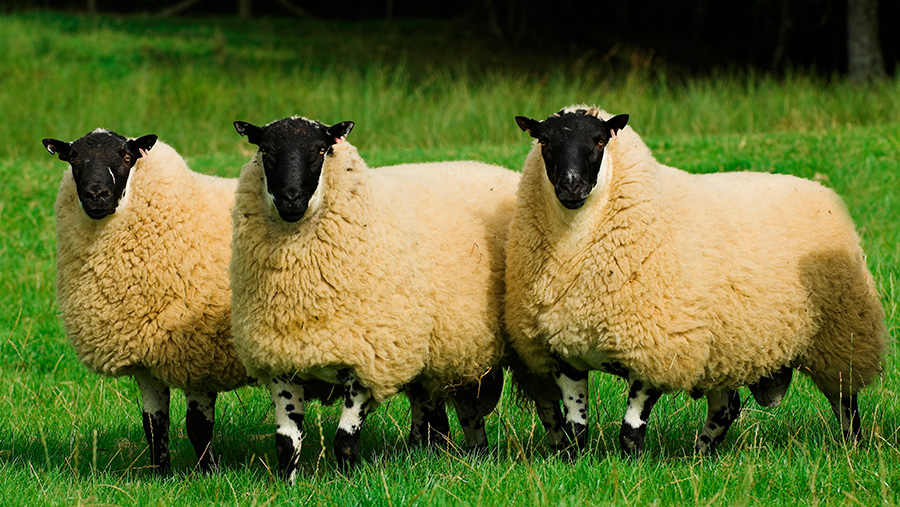 A leading university has faced robust criticism from farming leaders campaigning against the decision to sell three performance-recorded flocks that are “not commercially viable”.

The news from  Aberystwyth University has “disappointed” past and present students and could end 92 years of genetic progress, including 39 years of Beulah recording.

The 50-head Penglais Bluefaced Leicester, 50-head Bridfa Suffolk and 100-head Llanarth Beulah flocks are established from sheep donated to the Welsh Agricultural College, which was absorbed into Aberystwyth University in 1995, and will make way to potentially treble the university’s 1,000 head mule flock.

Mike Gooding, director at Aberystwyth University’s Institute of Biological Environmental and Rural Sciences (Ibers) told Farmers Weekly the university would not part with any stock it was not in a position to sell.

He said he was “very happy” to engage with breed societies and others to help maintain the integrity of the genetics and confirmed that £400 was received from the Beulah society this year from the breeding group.

“My understanding is that us accepting £400 was part of the breeding group having to wind up an account and disperse the monies among its members,” he said.

‘Surprise and a shame’

The decision was labelled a “surprise and a shame” by National Sheep Association chief executive Phil Stocker.

Mr Stocker said the university, as one of the leading names in UK agriculture, had research and educational responsibilities and that the flocks had a “value of a different kind”.

Commenting at the launch of the campaign against the university’s decision, Nick Fenwick, Farmers Union of Wales head of policy said it seemed “rash” to throw away what is one of only four performance-recorded Beulah Speckle Face flocks.

“We look forward to discussing members’ concerns and the rationale behind the decision with the university,” he added.

The Beulahs were offered in 1977 by about 10 breeders and the Penglais and Bridfa flocks formed in 1990, Hybu Cig Cymru (Meat Promotion Wales) documents show.

Former student and Beulah breeder John Yeomans, Newtown, Powys, said he would be “saddened” if the flocks were to be sold.

“Its astounding that they are buying mules at Builth when they have the tools on farm to breed their own recorded mules,” said Mr Yeomans.

“If they can’t make performance recording viable then what kind of message is that to students?”

If they can’t make performance recording viable then what kind of message is that to students? John Yeomans, former student and Beulah breeder

Moss Jones, director of the Welsh Agriculture Organisation Society (WAOS), said it was a “loss of an industry resource” at a time when young farmers were becoming increasingly interested in performance recording.

He said: “We are aware the university is facing a lot of challenges to many of its activities at this current time and while is it disappointing it is not unexpected.”

He added Welsh mule buyers were encouraged to buy stock from performance-recorded Bluefaced Leicester rams and there could be scope for flock-recording support through the rural development plan.

“Not many hill farms are performance recording and the Beulah is a traditional Welsh breed,” the agribusiness student told Farmers Weekly. “It is well suited to our area’s upland grazing.”

Professor Gooding reasoned the university farms “can’t be allowed to make recurrent deficits” and that the decision was nothing to do with the institution’s relationship with breeding company Innovis, which has seen Texels and Suffolks marketed at the Innovis Aberystwyth sale.

He said: “I’m not in favour of supporting inefficient farming operations on the back of student debt,” adding  the flocks were failing commercially and not delivering on a teaching or research basis either.

He said the farm targets a “modest” performance of selling 150% of lambs per ewe tupped at £65 a lamb and the high-index Texel flock would be play a key role in the future.

“We are not selling performance-recorded tups from those flocks [Llanarth and Penglais] and if I can’t get a breeding price for these sheep then there are question marks over them commercially as I am instructed to run a viable farm,” said Mr Davies, adding he hoped to sell the flocks “entire”.

“Our Suffolks have not performed as well in the sales this year. They aren’t commercially viable as a pedigree flock but our performance recorded Texels are.”

Many in the industry have drawn parallels with the sale of the Llanarth Welsh cob stud in the 1980s and question marks once surrounding the future of the Pwllpeiran research centre.

The welsh ponies were bought at private treaty by owners the Bigleys, Herefordshire, where the genetic lines are being continued, confirmed Anne Bigley of the Llanarth stud.

Regarding the Pwllpeiran research centre, Mike Gooding said the centre was central to current research, teaching and extension.

He said: “Ibers is doing much to expand its work in supporting Welsh Agriculture.

“This can only be achieved if our farming operation is an exemplar of sound financial coherence, and where the farm manager is appropriately recompensed for the research and teaching provision that is provided.

“Ibers strongly supports the practice of recording performance in sheep flock and demonstrated the value of this activity.

“We will continue to record and demonstrate that value to our students with our Texels.”