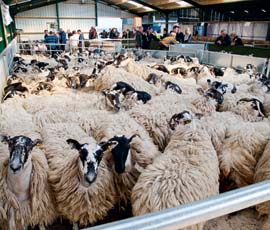 That was the clear message from a packed audience at the event’s keynote seminar, where balancing sheep farming and landscape preservation produced heated exchanges between farmers and environmentalists.

Current upland policies were branded “ill-conceived”. They had failed to recognise the practicalities of running hill and upland flocks and were imposing unworkable restrictions.

“Sheep numbers in the hills are falling dramatically. The hills are the backbone of our sheep sector by producing hardy, lowland ewes for prime lamb production.

“Being forced to take ewes off the fells in winter means we get too many lambs for hill ewes to cope with – and ewes come back off the hill in poorer condition as a result. And the gimmer lambs only have around eight weeks to heft which isn’t long enough. So the hefting is lost and because there are fewer sheep on the hill the hefting system is breaking down.”

Northumberland farmer Ross Wilson said he was not out to “bash” the aims of Natural England, but felt a change in attitude was overdue.

“We need Natural England to make more informed decisions before it creates its blueprints on the future of farming in the uplands, and we want more farmer input so the practicalities of how we run our farms can be fully understood and appreciated.

“We love the environment just as much as you do, but having people who work the land become part of the decision-making process would give a more balanced view and stop farmers feeling as though no one is listening to them.”

Hampshire farmer Poul Christensen, chairman of Natural England, said he was there to listen to hill farmers’ concerns.

“Believe me I’m taking all this in. Natural England is working with farmers and has already set up uplands grazing forums in Cumbria and the south-west to do exactly what you are suggesting.”

“It’s important we get more of these initiatives off the ground so we can work more closely with upland farmers to devise schemes that can benefit everyone.”

“It will come as a big surprise to many, but it’s the protein intake that’s way below what it should be. Assuming an 18% crude protein concentrate is providing the correct level of protein is ancient history.

“There are two types of protein – one which breaks down in the rumen and the other which is undegraded protein. We know ewes in late pregnancy need undegraded protein, and the best source of that is soya bean meal, fed at the rate of 200g a day for the last three weeks before lambing,” said Mr Vipond.

He advised feeding soya on top of silage or ensuring the compounder incorporates soya into the concentrate.

“Recent research has shown trace element supplementation – particularly with cobalt – while the egg is being formed in the ovary of the ewe can affect the behaviour of the lamb at birth. Genetics and nutrition are very closely linked and a shortage of cobalt can ‘switch off’ certain genes in the lamb than can affect its viability.” 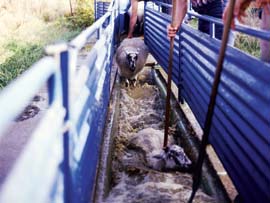 The introduction of a scab eradication scheme in Scotland had triggered a new debate on the disease in England – but was scab a problem to be tackled within the sheep industry or did it require the introduction of statutory control measures?

“Is it right to introduce a compulsory dipping period for scab when 95% of producers don’t have a problem with it? Is the long withdrawal period justified? Scab is very difficult to control; there isn’t one simple solution, but we need a clear indication from producers about where we go from here,” said Mr Morris.

Sheep farmers at the event were given an update on research into a scab test being developed by the Moredun Research Institute. Scottish vets involved in a new scab eradication programme in the Pentland hills say the test will enable them to assess the prevalence of sub-clinical scab and so avoid routine vaccination and the risk of increased disease resistance.