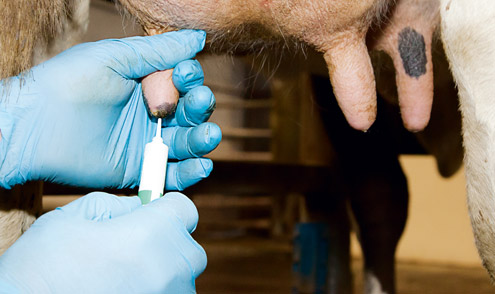 Nothing focuses the mind more on antibiotics use than knowing that if you don’t get it right the first time, you could have to wait four times as long before you can sell milk from that cow.

For producer Nigel Vicary, moving from conventional to organic production has initiated a complete change in mindset about how he uses antibiotics and helped cut new mastitis infection rates significantly.

However, Mr Vicary explains that improvements to medicine use haven’t just been due to milk contract choice. A complete system overhaul, which has included a reduction in cow numbers, increased acreage and a focus on cow environment, has reduced stress and driven down infection pressures. He also praises the daily attention to detail of his staff.

But he admits the big changes happened when the herd of 250 cows went organic in 2008.

“It was then we had to record everything and question whether it was worth treating cows with antibiotics,” says Mr Vicary, who supplies milk to Coombe Farms.

However, regardless of system, the emphasis on mastitis control and responsible medicine use should be no different, says vet Alastair Hayton (pictured below) of Synergy Farm Health.

“There may be a bigger stick to make you think about medicine use with organic, but the costs of mastitis are high, regardless of whether you are conventional or organic.” 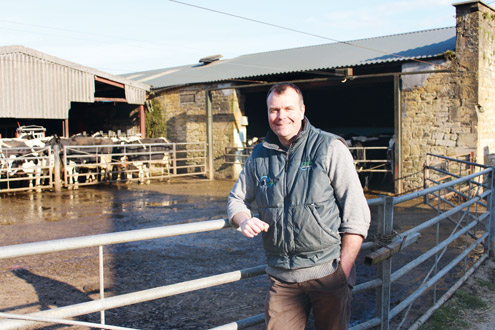 All organic producers have to justify every antibiotic treatment and adhere to a longer milk withdrawal period – two to three times that of a conventional production system. Depending on their certifier, some farmers are also restricted as to which classes of antibiotic they can use.

There is also a three-strikes-and-you’re-out rule, which means when an animal is treated with antibiotics more than three times in a year she is no longer classified as organic and her milk cannot be sold.

Mr Vicary says this particular rule has meant any antibiotic treatment must be carefully considered. “The three-strikes rule made us really focus on where we use antibiotics.”

Now, the main aim is to target new infection rates by identifying a cow before she becomes chronically infected, through analysis of milk-recording data.

A cow is classified as chronically infected when she has two or more consecutive milk readings of more than 200,000 cells/ml.

The aim is to pick cows up early and be proactive in preventing them from becoming chronically infected.

“The best chance to cure is at the start of infection,” explains Mr Hayton. “When a cow has one reading of 200,000 cells/ml or above, this means she could spread infection and be at increased risk of developing clinical mastitis. She could self-cure or she could get worse,” he says.

At Marks Barn Farm, every cow with a somatic cell count (SCC) of more than 200,000 cells/ml gets looked at so a positive decision can be made on that individual.

“When a cow goes over 200,000 cells/ml for the first time, we’ll go back to her two weeks later and test using the California milk test (CMT). If the test is positive, we will confirm with bacteriology to further understand the causal pathogen,” says Mr Hayton. The CMT is a cow-side milk test that uses a reagent to establish SCC levels.

A treatment decision will then be made based on these results and the stage of lactation, udder condition and whether she’s in-calf.

“With the loss of milk – especially from a longer milk withdrawal in organic – along with associated costs, a treatment will cost more than £100, so we want to make sure it is justified,” explains Mr Hayton.

By using a targeted approach to treatment in combination with improved management, clinical mastitis rates have been driven down to less than 15 cases for every 100 cows.

Justifying using antibiotics at drying off

Antibiotics use at drying off is also prohibited in organic systems. Consequently, any use at this time must be fully justified through records or bacteriology – something Mr Hayton believes is relevant to all systems.

“I think the organic approach to antibiotics use at drying off will be coming to the national herd,” he says.

There is also evidence using antibiotics when a quarter is not infected can predispose a cow to coliform mastitis. Equally, there is a one percent increase in the likelihood of a new infection being picked up in the dry period for every one litre more than 10 litres at drying off.

Mr Vicary says not being able to use antibiotics at drying off has meant he is more proactive at reducing yields before this time.

Using herd management software to make the most of milk recording data, as well as undertaking a DairyCo Mastitis Control Plan, has been fundamental to identifying when infections are occurring.

Contagious pathogens were first identified as the root cause of mastitis. Consequently parlour checks were undertaken, milking times extended and a cluster flush system installed.

Because the farm is certified by the Soil Association, they are not allowed to use third- or fourth-generation cephalosporin antibiotics. However, recurring mastitis caused by Staph aureus and sensitivity testing found these were the most effective form of treatment and a dispensation was granted. Cephalosporins stopped being used when the problem was rectified.

With the potential for similar restrictions to be mirrored in conventional systems, Mr Hayton says the aim should be to be prudent with the use of these antibiotics.

However, after contagious pathogens were controlled, there was a shift towards environmental mastitis. Consequently stocking rates, ventilation and bedding material have been addressed.